The next part of the ongoing saga of our late summer vacation. There is way too much to tell every detail but at least I can skim over the good stuff. Just to remember what we did as well as to inform you, my reader(s). (I’m always hoping there’s more out there than just me. Heh.)

So where did we leave off? Oh yeah. Yellowstone. It’s a truly amazing place – like no other in the world. If you’ve never been, you should consider it. And plan more than just a few hours or days. You need all that time just to sit and watch just one geyser until it blows. It’s worth it. I promise.

After three days camping at Madison and travelling each day to see the other geyser basins, the Fire Hole River and several other phenomenon unique to Yellowstone, we headed north to Mammoth for a couple of days. Our campsite was of course replete with resident wandering elk: 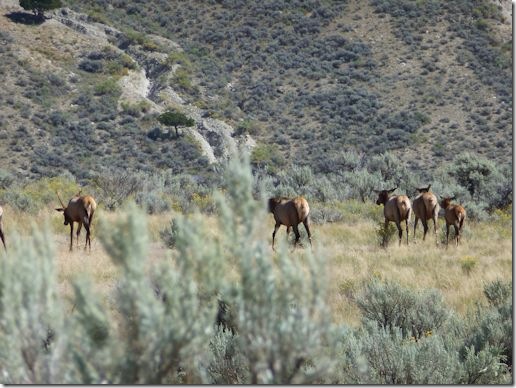 These ones waltzed through the campground, stopped the traffic on the highway and then slipped over the hill to the river trails just below here. This is only about a third of the herd. I was late getting out my camera! All I ever get is their behinds, I swear. Sigh.

The travertine terraces in Mammoth are quite different from the rest of Yellowstone’s formations and yet they are equally incredibly beautiful: 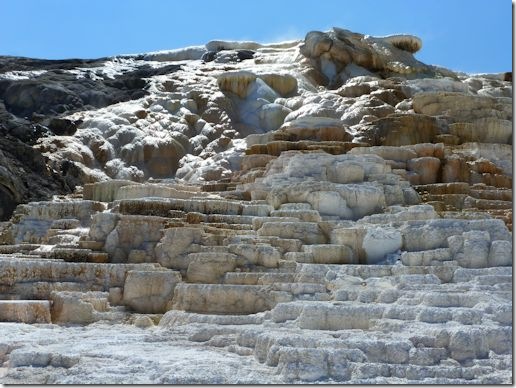 I so want to bring these ones home and install them in my back yard. Guess not, eh? There’s very hot water here filtering down each step created by the minerals in the underground springs over thousands of years. Up above it’s a huge terrace: 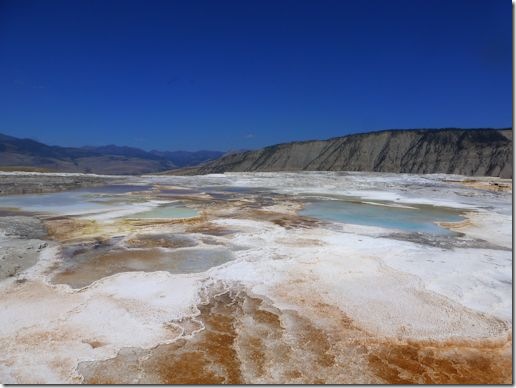 That’s Canary Spring in front named for the bacterial mats that give it the yellow colour. You can access this whole area by a system of boardwalks and stairs or, if you aren’t up to the hike (it’s a challenge at altitude!), there’s a loop road you can drive around. (We took the stairs.)

Then back in Mammoth there were the elk again, this time maybe waiting for their appointment in the medical centre? 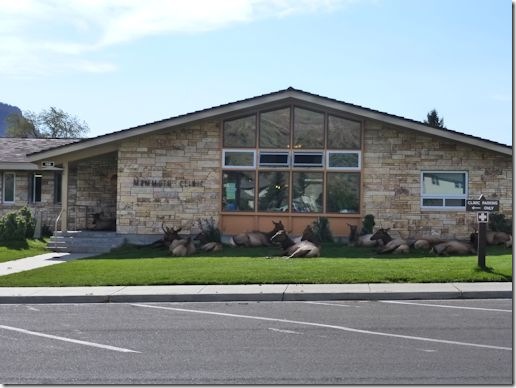 Luckily it has a back door because I think that cow elk on the front porch is getting impatient! When we drove past later she was looking in the window. Perhaps they hadn’t called her name yet? Yes, there was a park ranger on hand to keep humans safely away. She explained that the elk were there before the park and felt very comfortable in their own habitat. So there, humans.

Just around the corner from here, I have to say we got excellent free wifi in the Mammoth Visitor Center. Since we had so few opportunities for connection at all during our entire vacation, it was lovely to sit outside on the funky wooden benches and check email etc. Oh, and the visitor centre had some cool displays too. And a water bottle filling station. Made use of those too.

After Mammoth we headed back south for one more night in Madison checking out the sights on the way including Norris Basin. Unfortunately they were working on the road right at Norris Campground so we didn’t stay due to the noise and dust.

Finally we had to leave Yellowstone. We travelled south and east, crossing the Great Divide a number of times, and then through beautiful Grand Teton National Park. We didn’t have time to stay but continued further into southern Wyoming to Sinks Canyon State Park, with its amazing disappearing Popo Agie River (unaccountably pronounced “puh-po zhuh”). The river goes down into this complex underground system here at the Sinks: 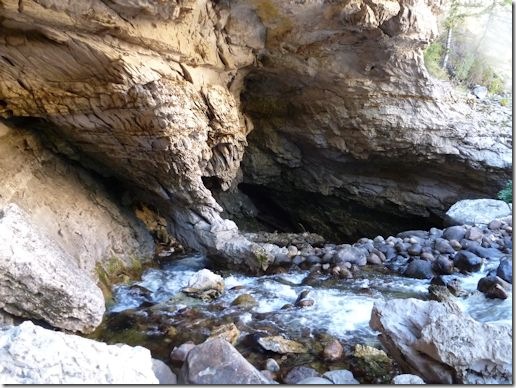 And it comes out again a quarter mile downstream over here at the Rise: 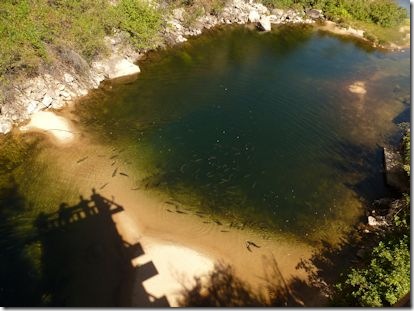 You can see our shadows on the viewing platform plus the fat and sassy trout down below in the Rise. If you like you can even buy a bag of trout food from a vending machine! No wonder they are so big, eh, those greedy guts? They’re also protected. No fishing.

Next we headed southeast into Colorado to the rather unimaginatively brilliantly named State Forest State Park. It turned out to be a really big area with lots of intriguing trails but our campground was kind of boring since they clear-cut all the beetle-infested pines and didn’t bother planting anything else. The lake had a nice trail around it though. It really was only a way station for us anyway as we went further south to a much nicer campground, Mueller State Park, the Queen of Colorado state parks! Yes. I do not lie. It was a treasure. Hot showers (though you needed many quarters), laundry (also with the many quarters), lovely spaced campsites, kind rangers, nice trails (though at 9000+ feet elevation a little difficult for us sea-level types), lots of wildlife including deer and a reasonable proximity to Pike’s Peak. The only thing it was missing was wifi. But I forgive it since there was also no cell-phone coverage either. You could even see the Peak itself from several park vantage points.

Mueller became our perfect home base for exploring the area. It was only 35 or 40 minutes to most of the things we wanted to see and the traffic was quite reasonable. So of course we went first to Pike’s Peak, one of the “fourteeners”, mountains over 14,000 feet above sea level, and undoubtedly the most famous. Rather than try to drive our poor old VW Westie up the switchback road, we took the funky cog railway: It was really fun and we sat across from a lovely couple from Texas, who shared our experience delightfully. It was a long climb up and up and we saw lots of yellow-bellied marmots and even a big-horned sheep. Our conductor Fairlight (her real name, but she told us to call her “Rocky”) was great. Mostly not too boring or annoying and occasionally quite informative. Eventually we finally reached the top and it was as impressive as one would hope: 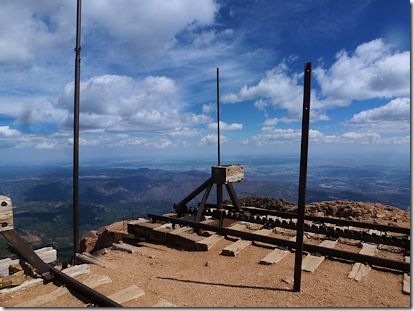 There’s the leap into the abyss! 14,115 feet up. Luckily the train stops before this point, yeah? Apparently it was nearly clear enough to see 5 states from here. A little misty. OK, it was smoke (again) from the forest fires in California. Sheesh. But not bad apparently. It was pretty amazing really! There was a 360 degree view. All. The. Way. Around.

Down below again, Manitou Springs was a really funky little town nestled within the hills and red rocks. (There was a house for sale that I could have bought with a stream running by out front.) We came back again the next day to visit the Manitou Cliff dwelling: 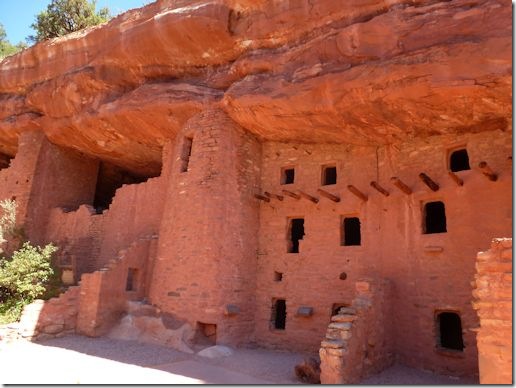 Unlike the ones we visited last year in Mesa Verde, this one has been moved to this site (to preserve it) and you can climb around it and touch everything more freely. There’s also a museum and gift shop complex that’s kind of fun to explore. A bit commercial but not too over-the-top, unlike our next stop: 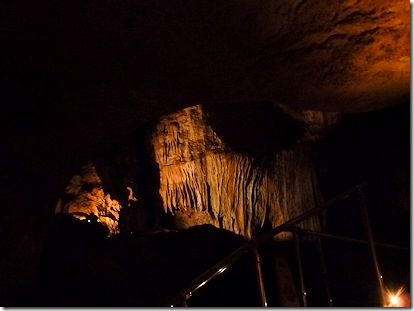 Wind Cave is both over-priced and over-hyped. We’ve seen quite a few cave systems and this one is definitely not overly impressive. It’s kind of damaged and the guide was too pushy and quick. She mumbled a lot. And they even took photos of you that they wanted $15 for! Bleh. They’ve tried to add even more “adventure” nearby with a zip line and such but I wasn’t impressed. Rated a “barely OK” on my Holiday Metre. The one impression I took away was this improbable wall of hair accessories: 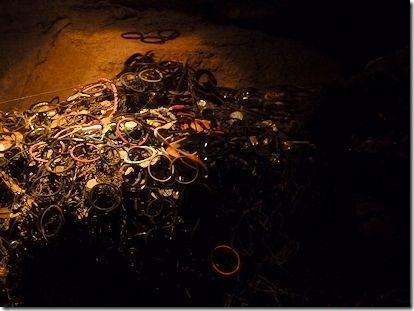 It was both fascinating and kind of creepy. A huge wall of hair pins, bobby pins, barrettes, elastics and more. Apparently it was started in the late 1800’s by some female visitors and now it’s kind of a “good luck” gesture. Of course you can’t add to the pile yourself anymore. There’s a receptacle! Send money…

Sorry, I digress. The last place we visited in the area was in Colorado Springs, a city park called the Garden of the Gods: 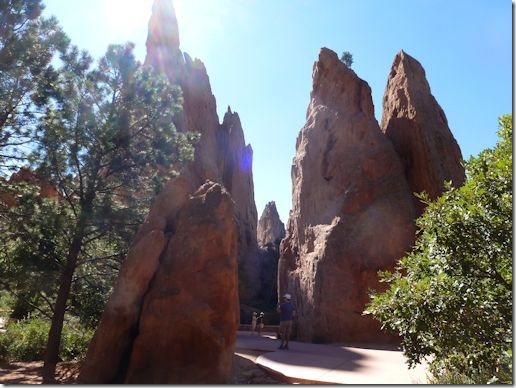 It was really lovely! The red rock formations sprout right up from the earth with paths among them. Rock climbers can even access a number of interesting walls within the park. We enjoyed walking around with all the people, both tourists and locals, who took the trails. 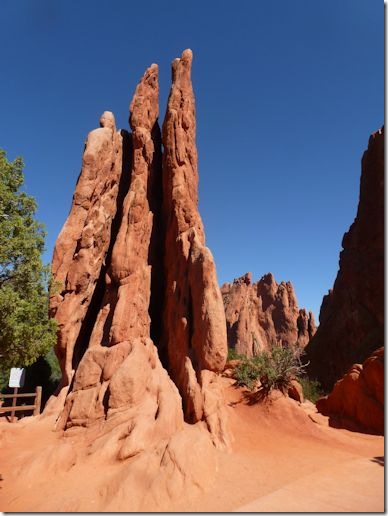 As you can probably tell, the weather was a quite warm but still incredibly perfect!

This point was our farthest east for this trip and our highest too! Mueller State Park itself is over 9,000 feet. We did pretty well for sea-dwellers but that is really high up! We found it difficult to hike very far but did our best. Since this was our turnaround point, where we began the long trip back home, we spent one whole day in Mueller cleaning and tidying and repacking the Westie before beginning the return journey.