On A Frosty New Years Eve

Hello again! I feel much better after a good night's sleep! And no more quaking.
OK. Where was I? I spent a little time in the dye studio - not eco-dyeing the last three scarves but dyeing some yarn instead. I played with some really elderly lichens that had been in the stash for yonks. I picked these Lobaria pulmonaria at least 20 years ago while visiting my sister in Haida Gwaii. 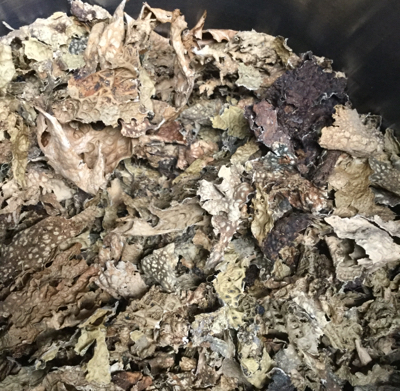 There's a whole lot of conflicting information now about harvesting slow-growing and often rare or endangered lichens that I was completely unaware of at the time. Even to the scientists they are still pretty much a mystery! I do remember that these were very plentiful where I collected them and I didn't take a lot, just 300 g or a quart-sized ziplock baggie. However I was made to feel quite guilty about it (whether rightly or wrongly) so I didn't use them in all this time. Recently I realised that they were just sitting there already picked and dried and since I couldn't put them back where I found them (I don't remember anymore where it was exactly anyway) I might as well actually use them for their original purpose.
In the big pot I poured hot water over the crushed lichens and left them overnight. The next day I brought the dyebath up to barely a simmer and cooked them for several hours. I had read that it was good to keep the dyestuff in with the fibre as you dyed it so I was wracking my brain on how to keep all the tiny clinging bits of lichen out of the yarn. In the sewing stash I found some nylon veiling and sewed a bag out of it. Instead of putting the lichens into it, I put the 4 skeins of Elann sock yarn in the bag and tied a knot in the top. 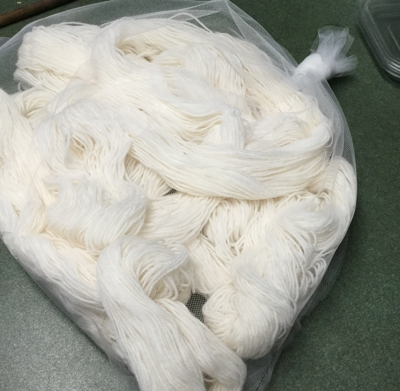 Then I popped this into the dyepot and simmered for another couple of hours. 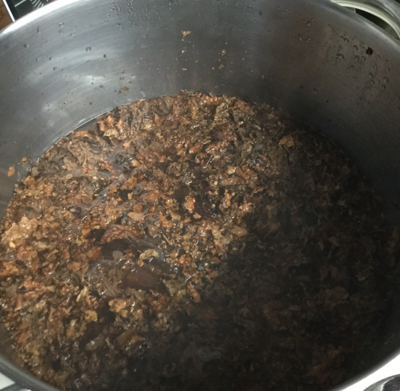 It's in there somewhere! The nylon bag worked pretty well to keep all but the tiniest particles out of the yarn. A lot of those tiny bits came out when I rinsed the dyed yarn and any more remaining will likely pop off when I go to wind it into balls. The yarn had been previously mordanted in alum which isn't necessary for the lichen dye but at the time I wasn't sure what I was going to dye it with. The mordant might have a positive effect on the colourfastness or on the exact shade that I got but I don't know for sure. I think it's very pretty but not quite what I expected. 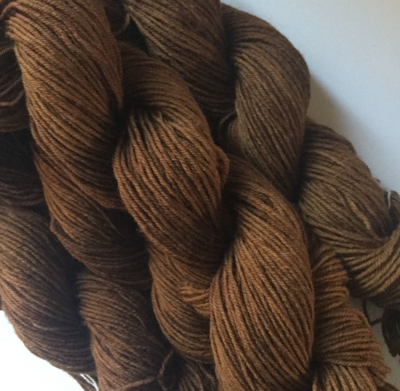 I had a tough time photographing the colour exactly but it's a lovely warm brown. And the yarn smells faintly of forest. Ummmm... Superwash wool/nylon sock yarn dyes extremely easily in my experience and the skeins are much more evenly dyed than I expected after being squished into the bag. Now there's still some colour left in the pot but I don't have anything I want to put in it. Definitely not the wool roving. I'd never get the lichen bits out! Oh well. If it ends up in the compost so be it. From now on I'm going to use my home-grown walnuts for brown dye! The lichens can stay in the trees.
Meanwhile I've begun a new knitting project and picked up an old one again. I also need to get back into the sewing. The piles of fabrics and patterns aren't getting any smaller! The quiet winter months are usually my most productive time and I'm really looking forward to digging in.

Taking a minute here to say that I wish everyone a very Happy New Year! 2015 was a good year for me. Even though I became an official Little Old Lady, I'm feeling quite healthy. We had a great late summer vacation and hope for more fun times in our little old van again this year. I got a lot accomplished and finally managed to cross some major items off the to-do list. Things are going well and life is good. What more can one ask of 2016 except that it carry on in the same way? I would cross my fingers but that just makes it hard to knit!

Happy New Year to you and yours!

I would love to breathe in the scent of your dyed yarn. That colour is you!

Funny, I just did some dyeing with lobaria pulmonaria yesterday. It was with fresh lichen from some downed branches. It is very plentiful on big leaf maples and blows down in great quantity over the winter. I don't think it's a slow grower compared to rock lichens. Anyway, the colour I got was very similar to yours. I think dyeing with the lichen in the pot as opposed to simmering and straining gives a deeper colour - I did both, but with different yarns so not really a scientific comparison!
Happy New Year to you too!

I gather windfall lichen everywhere I go, surprising how quickly it adds up. Had a wonderful source of lobaria pulmonaria on Salt Spring Is. - it seems to like the Gulf Is. wishing you a happy, creative new year.

Your color is very nice but you'd think you'd get something a little more exotic after all the trouble of collecting & storing it!!! And all that guilt too. So disappointing in some ways when you think how easy it is to find lovely browns elsewhere - reminds me of my pal collecting walnuts for me from the neighbor's garden. It never occurred to me that she would PEEL them with her BARE hands. No mordant at all & it took WEEKS to wear off. I shouldn't have laughed at the time. But I did.