The light is definitely a little brighter today! But that could be because the clouds are thinner. Heh. Solstice Supper with the fambly was delightful and the turkey and fixings were scrumptious. Darling Daughter gone done herself proud! I'll have a hard time Christmas Day matching up to the garlic mashed potatoes, dilled carrots and brussel sprouts sautéed with onions and bacon fat that she made. Not to mention Kevin, the monster turkey! Delish. She did have a little help though, including her brother mashing the spuds, her dad carving and of course my patented lumpy gravy (which for once wasn't even lumpy). Plus I brought the salad and her sis-in-law brought the desert. A family affair for certain!
I'm making myself hungry again so enough about food for a minute. I wanted to show off a Finished Object! Feels like the first one in forever. I present the Alpaca Tweed Beret, Take Two: 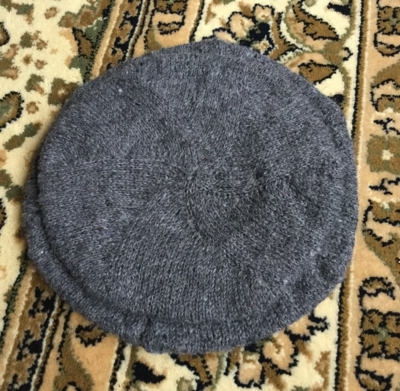 I put it on top of the original one to show how much smaller it is. I blocked it over a 10" plate and now it fits my pinhead much better without overwhelming me. Here's the underside where you can see the neat hem: 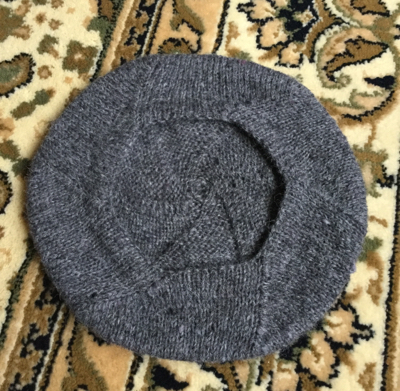 The yarn is my handspun and the pattern is the same free one: Beret Easy by Aileen Cahill. It is indeed easy since you knit to measurements instead of stitch numbers so it works with any size yarn and needles. I just stopped about an inch shorter on the increases at the crown and on the decreases before the hem. I also went down a needle size or two for the hem facing which I think helps a lot to keep it snug. I may get a photo on me eventually but I need a haircut first! Next week maybe.
Moving right along. I baked shortbread and butter tarts yesterday and now we're off to pick up our fresh turkey and a few last minute groceries. We keep thinking we're done and then we aren't. However we are running out of time so this had better be it. After this we'll be living on leftovers for awhile! Mmmmmm...