Beverly Johnson, the Fairy Bra Mother, has declared today "Dead Bra Day"! (I can't do links properly so here it is: http://bramakers.blogspot.ca/2016/02/dead-bra-day-february-13.html ) Of course it's the day before Valentines Day, often noted for gifts of sexy lingerie, right? OK, not in my world but perhaps in someone's. Anyway, I took the advice to check the drawer for bras that are past their best-before date. Ummm....that would be nearly all of them! So instead I decided to give a bunch of my commercially made non-underwire bras a bit of a makeover.
Basically I have a major problem with the straps falling down. On every single bra ever, sadly even including the ones I've made myself. Blame my very narrow rounded shoulders which just seem to invite everything to fall off them. So I finally figured out what to do - chop off the straps at the back and re-stitch them closer to the centre back. So simple really! Why didn't I do this decades ago? 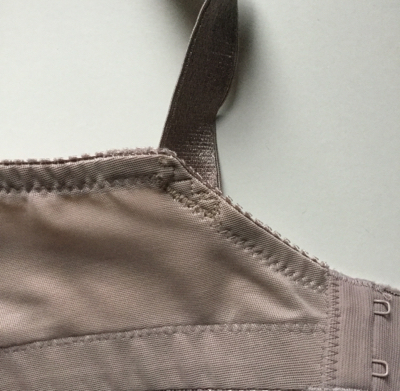 Just a strap's width inward did the trick. Unfortunately this trick is a little more difficult with my homemade bras because the strap elastic is continuous to the hook fastening. I'm sure I can Frankenstein it but it won't look great so I haven't tackled those yet. The rest of the bunch are so much more comfortable now though! I may be sorely tempted to hack the homemade ones too very soon regardless of how bad it looks. 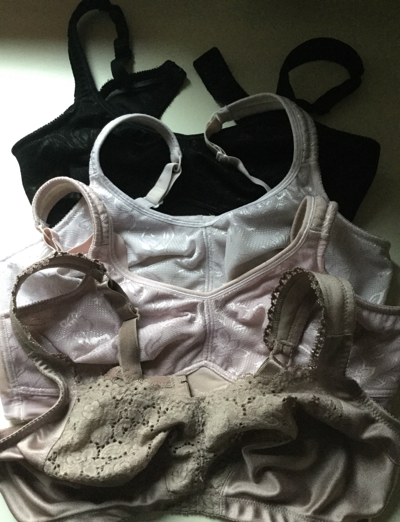 These are some of the collection. I also took the side boning out of several of them. It digs in uncomfortably and isn't really necessary for support. I plan to clone the one on the top of the heap there since it has several of the features that I prefer in a bra: diagonal seams, power bars and wide padded straps. Now that it's cured of its strap-down-itis it's definitely my favourite. The other ones in that pile have some interesting features too, such as fold-over elastic and the front band in two overlapping doubled pieces of power net (rather than continuing the plush elastic) which is something I haven't seen in other bras. I now understand what Beverly means when she suggests checking out ready-to-wear bras for inspiration.
And, in a carryover from yesterday's post, here's an interview with Elizabeth Doherty on her set-in sleeve technique and her book: http://quinceandco.com/blogs/news/55075267-in-depth-top-down
In other news, our clothes dryer died an unhappy death yesterday. It was a mere 33 years old! Thom gave it a grand effort trying to revive the beast but it was futile. However now is not a particularly good time for such a large expense. Not to mention the FUN we're going to have getting the old machine out and a new one in! There are all kinds of obstacles including stairs and a very tight corner. We have to remove a door and part of a wooden wall, plus move the bicycles and a bunch of other stuff. Ugh. Wish us luck, will you? Thanks.

Have you thought about crossing those back straps or trying the T-bar shape??? The high back & straps from the middle of your back would probably work well for you. Of course, the bra would have to fasten in the front . . . And good luck on the dryer. I once resorted to replacing all the thermostats in the series to save a dryer that was impossible to get out of a basement. Luckily, I moved before it failed again. I know exactly what you're going through!

Thanks for your thoughts, Sharon, but I haven't found anything in those styles that fits. I did try one of those plastic strap connector things but it was hard to get on. And then the straps come up too high on my neck. The strap move fix works really well though! Can't believe I never tried it - though I did think of it before.