I'm still knitting on the Lichen Twist shrug in an attempt to get something off my needles. I have a new project in the wings but I don't dare start anything new until I finish something. Three knitting projects for me is at least one too many! I finished the body but I didn't want to work the sleeves separately and then have to sew them in. A few other knitters on Ravelry also complained that they thought the sleeve caps were too narrow - not that that's usually a problem for me. I decided that I would try out the top-down set-in sleeve technique from my recent book purchase: 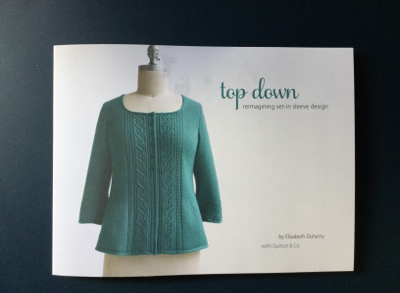 I've knit set-in sleeves from the top before but Elizabeth Doherty has refined the technique quite a lot. The stitches are picked up from the armhole beginning a short distance to the left of the shoulder seam at a rate of 85-90% across the sleeve cap. Then down the side at a 50% rate, across the underarm at 100% and back up the other side at 50% again to where you began. Then you begin knitting short rows (without picking up the wraps on the return) and finessing them to provide smooth transitions through the sections. It's a little fiddly but my, does it make a nicely fitting sleeve cap! And bonus, I even ended up with the correct number of stitches at the end. 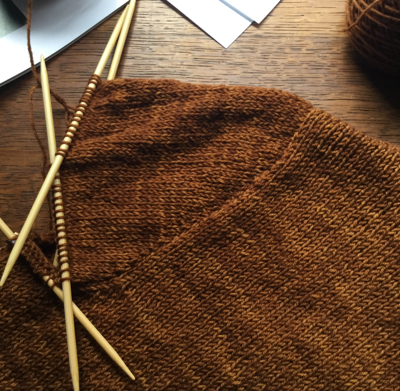 My knitting kind of looked like an African pigmy hedgehog with all the dpns I had going but I'm totally used to that! I'm sure the sleeve will look even better when it's blocked. I used smaller needles for the pickup and it was a good excuse to try my new Knitters Pride Karbonz. They're really sharp and don't slip out easily: 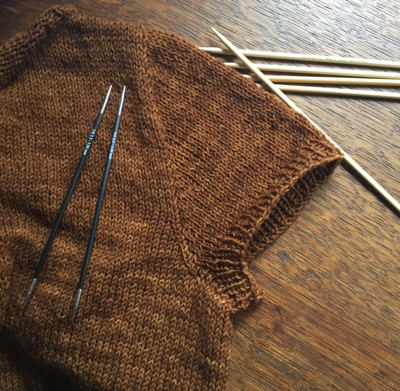 Those two needles on top of the sweater show you what they look like. Carbon fibre composite like my Blackthorn dpns but with nice metal tips, unlike my worn Blackthorn dpns. Karbonz are much smoother and the nickel-plated brass tips are exactly as pointy as I prefer, aka not ouchie-sharp. The size is easy to read. Love. May have to buy more of these. My usual choice is the other set there, the Clover Takumi bamboo dpns. You definitely want something that won't easily slip out of your stitches.
Surprisingly I'm going to have a half a ball of the yarn left after I was so concerned about running out. The inch of extra length I added was a good call but if I could, I would have made the front drape a few stitches wider because even though I already increased it by a couple of inches it's still a little tighter than I would prefer. Oh well. It remains to be seen how much wear I will get out of this sweater anyhow. No matter what, the sleeves were a great learning experience! I will definitely be using that formula again. Well, on the second sleeve for starters! Hope I can match the first one...
BTW, we had a lovely time with Nana at FlyOver Canada. I was a wee bit sceptical but it was really fun! Although rather short. At least we got the bonus tour of China, which I thought was the best part. There was a very rambunctious dragon involved! And then we went for lunch at Steamworks brew pub. Perfect day.
And speaking of dragons, the dragon egg garden ornament that Thom made a number of years ago went missing. I'm not even sure we have a photo of it, but it was turned in wood, about 18" tall with a huge marble eye peeking out of a crack. It was starting to look rather weathered but obviously some asshat decided to take unauthorized possession. Unless it hatched when we weren't looking?