Further Down The Road And Back Again

So here we are at Part Two of our Early Spring Escape! After we left Puyallup we continued down the boring I-5 to stinky Longview, WA. Yes, there are pulp mills there. Definitely odiferous! We didn't linger but zipped over the bridge across the Columbia River to Oregon and carried on to Astoria. There we managed to pick up a double chip to our windshield while crossing the bridge toward Warrenton from a rock thrown up by a passing truck. Damn and blast! And BTW cost nearly half the price of a new windshield to fill with epoxy when we got home. We don't want to replace it again quite yet. How does this always happen?
We made it to Nehalem without further incident though the weather wasn't nearly as pleasant as it had been. We managed to fit several good long walks in between the wind and rain. 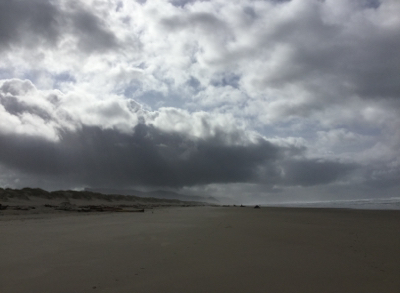 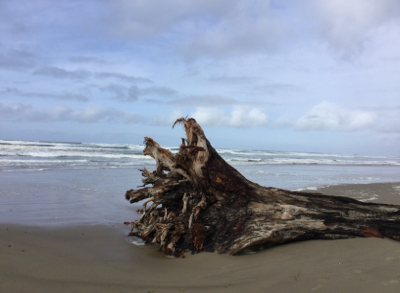 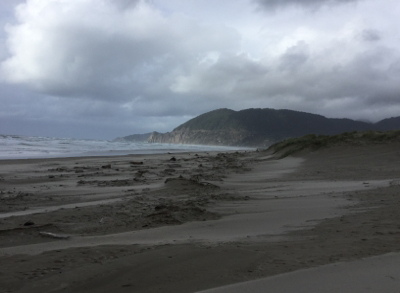 We love the Oregon beaches! 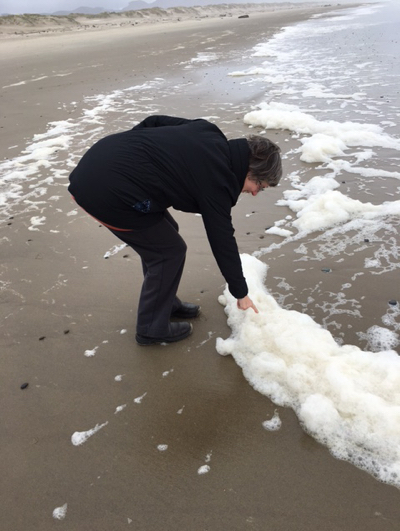 Me checking out the sea foam whipped up by the waves. It leaves a fine sandy deposit on my hand!
We also walked the paved trail that goes around the tiny airfield and overlooks Nehalem Bay. The winter storms had obviously been bad this winter: 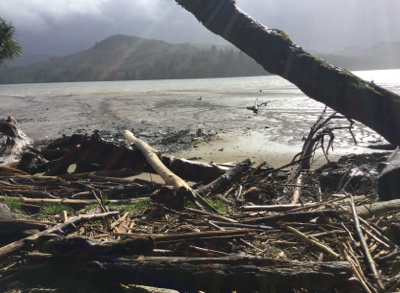 This little salamander liked all the moisture just fine though we were glad of our rain gear. It was sunny and raining at the same time! 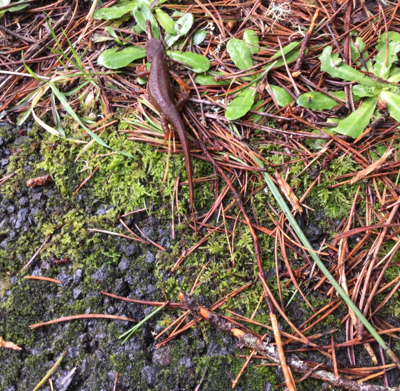 We managed to stick it out for three days, even walking as far as Manzanita for lunch in the funky old tiki-ish bar. (Excellent beer and cider but meh food.) Then the rains set in again. Finally we decided that we had enough and headed north toward home. The drive north was rather nerve wracking though with the strong winds and intermittent downpours. We had to stop on the high part of the bridge over the Columbia from Astoria to Washington due to repair work and we could feel the van creaking and swaying rather alarmingly. Even the flag person couldn't stand up and hold the stop sign because they were nearly blown off the bridge!
We discovered evidence of the storm all the way across Washington and up the Hood Canal. Lots of debris from the trees on the highways and even several trees down. One poor guy even had a big branch land on his car! We didn't see it happen but they were clearing the road as we went by. He seemed OK even if his car wasn't. Yikes. Right before we got to Dosewallips State Park another tree had taken out the power lines just moments before we got there. They were just calling it in to the authorities as we passed. We were the last people they let into the park and we got a discount on the site because the power was out. It came back on sometime after dinner though so we didn't mind. The bonus was this: 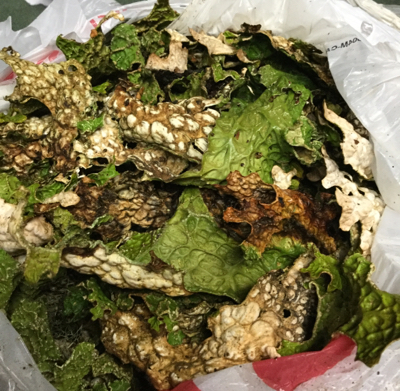 Yes, that is a shopping bag full of lovely fresh Lobaria lichen. My excuse was that it was blown down in the road and just being driven over! I know I said I was going to be good but you know this bounty was just going to be destroyed if I hadn't rescued it. My excuse and I'm sticking to it.
Anyway we were happy that the weather was much better the next day as we travelled the rest of the way home. We caught the Port Townsend ferry (our old friend the Kennewick again) over to Whidbey Island and then north to the border crossing that was surprisingly fast and painless. The timing was perfect because it has been raining on and off ever since. Sometimes you just have to know when to go on home. Heh.
The poor van is still in need of a good wash and dry inside and out. She's covered in tree bits and mud and the canvas pop top is still damp. The new propane heater came in very handy but it leaves more condensation behind than the electric one. At least we were warm! Kind of important when you decide to go camping in February. Spring might be showing its blossoms but it's still too chilly to sit around outdoors.

Meanwhile I have a new FO to show once I get a photo and I also finished knitting a new pair of slippers. They have a lot more work to go though because they need to be fulled, felt insoles stitched in and leather soles attached. My old ones are 6 years old now and starting to fall apart. They sure last longer with the leather sole! I got the last set of new ones available at N.Jefferson's and they said they can't get more so these had better wear for a good long time.
And as always there's more projects in the works. More soon.

Please post a photo of your slippers when you have finished them. I have a pair in the works and I would like to know if we are using the same pattern, especially since yours lasted six years. I'm also interested in the soles you are putting on them.

Louisa, I am a lurker on the other side of the country, Halifax NS. I truly enjoy your blog.
Donna

Lovely to hear from you, Donna! We'll be heading your way in late summer on our way to NFD, though likely not to Halifax.😒

Of course I'll post the slippers with all the details. Currently they're drying after their fulling which might take awhile!

Only die-hard campers go off to camp in February!! Mind you, you had wheels under you, a heater & luxuries like lights, a stove & a cooler, but still . . . I suppose you could've been out in a tent, fer gosh sake. I'd rather be home in my bed under my new red fleece sheets, thank you. Nice haul of lichens, though!!!!

Yup, die-hards we are! (Also dye-yards but that's another story. Heh.) No tenting for me. Been there; done that; no more. Loves my wee Westie.