Well, I'm obviously making up in numbers what my posts lack in elegance currently. Blame it on the app that I'm stuck with. And the lack of a proper keyboard. Though I am definitely getting better at typing with two fingers.
Anyway, I've been continuing to stick with the weaving. At least some progress every day. I'm up to Placemat Number Five and I still can't see the end of the warp. How much did I put on the darn loom anyway? No recollection and I haven't yet discovered a note that will tell me. I guess I just keep going until I run out, huh?
The weaving is getting somewhat easier as my body remembers what it's supposed to do. I haven't done much weaving at all in the past 10 years or so. Not like I used to anyhow. I still have plenty of household textiles that originally came off my loom: 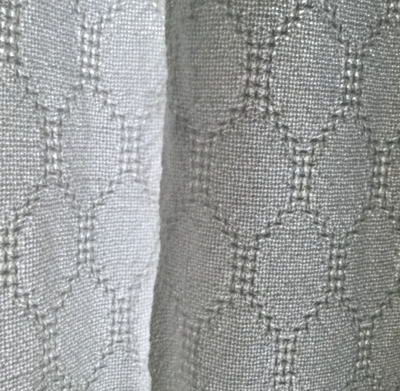 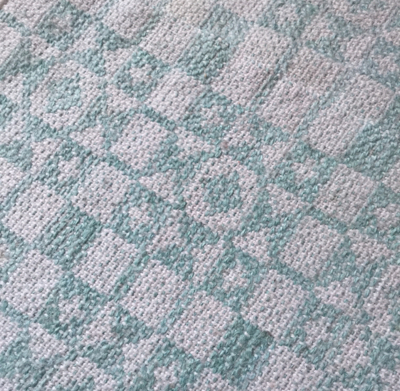 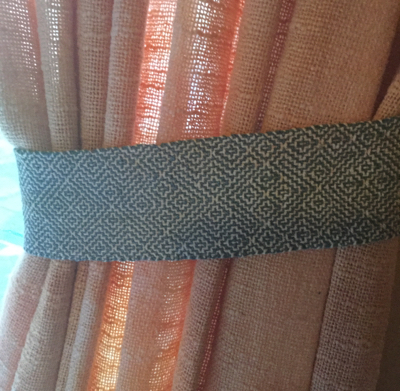 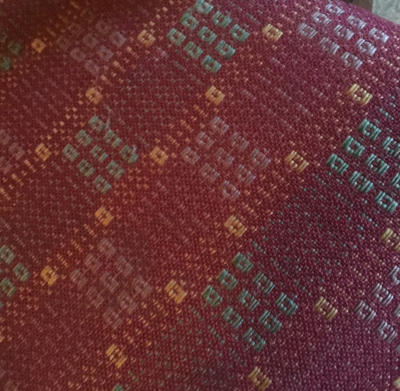 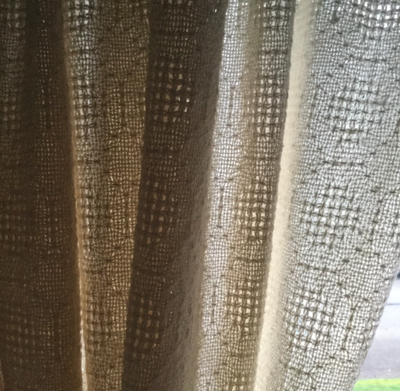 Just a quick survey of the most obvious pieces around me. Three of those are curtains, one is a placemat and one is the upholstery on the kitchen chairs which is in dire need of replacement. There's also tea towels, napkins, pot holders and two blankets that I can see from where I'm currently sitting. So hey, I used to be pretty good, didn't I? I'm just badly out of practice. My brain knows what to do but so much of weaving is muscle memory involving both the hands and feet at the same time. I know I need to do a lot more of it to get really comfortable at the loom again. Just. Do. It.
Here's what the placemat I'm weaving right now looks like: 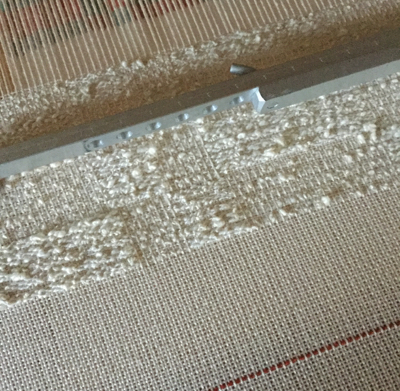 The pattern weft is a cotton bouclé and the same off-white as the warp and the tabby weft so the effect is textural rather than colour. The weave is yet another treadling variation on the Summer & Winter threading blocks. There are a least two more and perhaps as many as three placemats left to weave on this warp. Hope I don't get bored and chop it off early! However I do need to get onto my tea towels for the guild exchange. I'll have the rest of the yarns for that project by Friday so I can start winding the warp after that.

In knitting news I finally started a new project - socks! The pattern is Spring Forward by Linda Welch. Perfect for the first day of Daylight Savings, isn't it? I thought so! 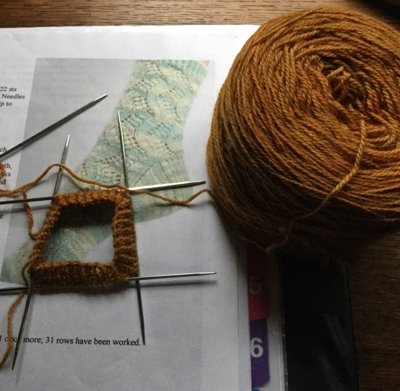 The yarn is Sweet Georgia BFL Sock in Ginger, left over from my Candelaria Cardi from last year. After the socks I hope to have enough left again for a shawl and then I'll have a whole ginger collection! Sweet Georgia is going to be at Fibres West this Friday and Saturday and then their big sale is coming up the Saturday after that. How hard is it going to be to avoid buying more? We shall see, won't we?

Hello, I recall that you made your own dress form. Do I remember correctly that you blogged about this? If so, how would I navigate your blog to get to the 'making a dress form' blog?

great to see you weaving, take care with bod and the necessary muscles will toughen up. It is always a pleasure to see the end of the warp and contemplate the next project.

Dear Anonymous, I have no idea where that blog post is! It was a number of years ago now that we made it. The best I can tell you in a short reply that it was definitely not fun but I'm glad it's done. I used paper tape, the kind the old-fashioned butcher uses that you moisten with water. I wore well-fitting undergarments and a plastic garbage bag with holes cut for arms and neck to protect my skin. The only thing I would have done differently is try to find a second person to wrap because it took my husband forever by himself! He used a hair dryer to speed up the process. After the form was cut off I just used more tape to put it back together, stuffed it with crumpled newspaper and inserted the stand that Thom made for it. Later I made a fitted cover to smooth it a bit and give me a surface to pin into. There are lots of tutorials out there for the duct tape version but we found the paper tape to be much better over time even if it was harder to do initially. Best of luck!

One can never have too many curtains, cushions, towels & cloth. And, while some people think weaving your own is a waste of time, I think it's wonderful!! House linens used to last a lifetime because they were hand made. And you get what you want if you make 'em yourself!!!! I'd take a 6 pack of textured kitchen towels!! I have to knit mine. And that's an interesting sock pattern you've got there. It will be very yummy in Sweet Georgia!!!