Oh. My. Please continue to remind me that I never again need to buy any spinning fibre. None. And probably no knitting yarn either. (I might make an exception for good sock yarn though because I can't spin what I prefer. But I've already got enough to last for quite awhile.) There's nothing like a good inventory to give you a real look at what you already own! It's frightening actually. And I'm not finished recording it all yet. 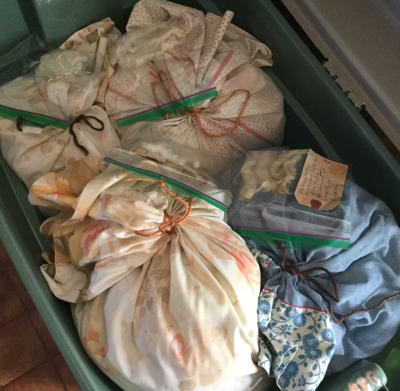 This only a single bin. There are many more! Each of those pillowcases has a fleece, in this case Romney which was the easiest type to get locally back in the day. So it's not at all surprising that this breed is by far the largest percentage of my wool stash. I learned to spin on good old Romney! It's nice for long-wearing sweaters, blankets and even rugs from the coarser fleeces. Not next-to-the-skin soft but easy to process and spin up. This lot is from the late 1980's, I think.

I have at least a sampling (and often considerably more than a sample) of pretty much every kind of fibre available to handspinners. After all, I've been spinning since the 1970's so I've had plenty of time to collect it! The attic space is now clean and m*th free. All the animal fibres have been inspected and are either in pillowcases or ziplocks. A few suspect items are cycling through an Arctic Vacation, as I call the freezer treatment of a few days in/a few days out/repeat. I'm probably going to speed up the inventory process now and just record groups of similar items because I'm running out of both energy and time. Two weeks have just flown by! And my study still looks like this: 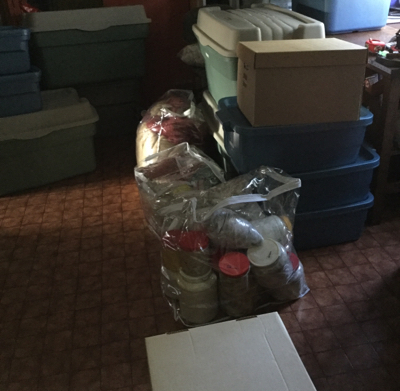 At least I've located my next spinning project. I washed this greasy fleece yesterday: 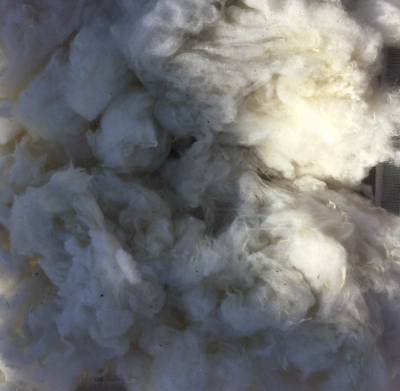 It's about 500g or so of a Rideau-Arcott X Canadian Arcott that was left from a workshop with the late Anne Field from New Zealand that I took in 2010. This fleece (from an Alberta ranch) is lovely, white, even and glossy. It's also sadly full of sand and VM: 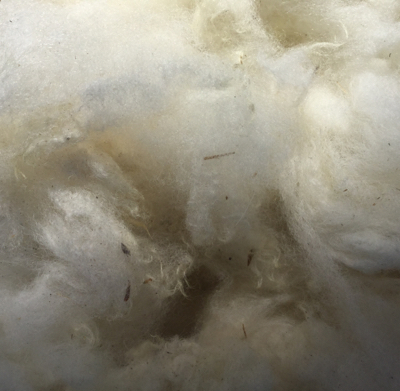 Quite a lot falls out as I tease it but it's a little more tedious than I prefer. The results are worth it though. Unfortunately I don't have enough for the sweater I want to make so I'll have to blend it with something else. You might suspect that would be Romney. Good guess! I just happen to have a baby Romney fleece with a similar length and feel. It's not as shiny white because Romney wool tends more to cream shades. But since I plan to dye it anyway, no biggie. This will be an ongoing project for the summer.
The weather has been incredibly warm and sunny but I haven't really taken advantage of it. No long walks. No seeds planted. The excellent light has been great for my inventory work however! Anyway, today I'm leaving the mess and going for a long walk. In the meantime I'll leave you with this image from the other morning. My dad's favourite colour was "sky-blue-pink" and I always used to argue that it wasn't a real colour at all. Well, Poppy, I was obviously wrong! 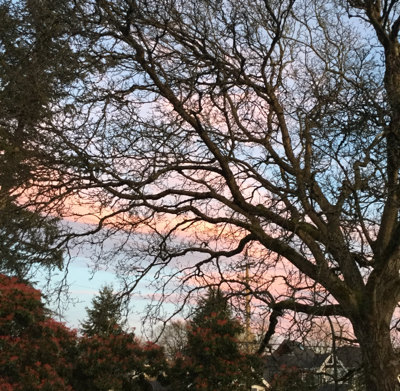 Yes, the walnut tree is the last to get leaves around here. It will be at least another month. Luckily the bare branches are pretty attractive too. We get to look at them for more than half the year.

Yeah, yeah, yeah - I'll bet I'd still have fleece from the 70s too if I hadn't left my husband & house about 18 years ago . . . but I've accumulated several fleeces & 11 bins full of spinning fibre & some knitting fibre too - three 135 LITER bins, that is, since. I decided, all by myself, that other than sock yarn, I better get my ass in gear & start spinning or give it away. I did tell everyone that I was buying it for RETIREMENT after all, when I would have the time but not the money . . . I have 14 days left to Official Seniorhood.

OMG! You had a workshop with Anne Field. Wow, now there's some street cred!