Been awhile, hasn't it? I've been plugging away on various projects. The weather has been pretty fabulous! Mostly sunny with a spring flower explosion everywhere. We are quite far ahead of normal for this month. Even my lilacs are blooming already! On the other hand, of course I'm running behind myself. I did get the peas in but my spring greens are still under the lights in the Grow Op (aka my basement seed-starting countertop). But that's ok. They will catch up. And I'm not planning an elaborate garden this year anyhow.
Now here's the Craft Report:
Weaving
My Tea Towel Exchange warp is wound and threaded through the reed. I warp front-to-back so the next step is threading all 489 ends through the heddles. For this job I sit on a soft mat on my locked treadles under the loom so the heddles are at eye level. Yes, my Woolhouse countermarch is big enough that there's plenty of room to get under there. It sounds uncomfortable but it's not for me as long as I don't overdo it so it will take several sessions to finish this step. A production weaver I am not!
Spinning
There's a couple of projects on the go in this category. I'm working on the second half of the Mahogany Falklands roving and continuing with the 2-ply fingering weight yarn. I want to have enough for the Flare pullover by Veera Välimäki: 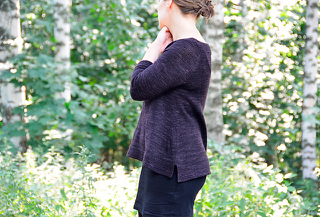 It takes something in the 1200 yard range for my size and I already have over 800 yards spun. Another big skein should do it. I didn't have enough of this fibre for my original plan. Or even my second one. So I hope this is it! Third time's the charm? It looks like it will be very wearable and a perfect addition to my wardrobe anyway so I'm happy with this option. So far so good.
The sweater I really wanted to make is the Intersect by Norah Gaughan from BT Winter 16. This pattern takes a good 2000 or so yards of fingering with all the fine cabled sections and the front drape. That's a lot of spinning even before I get to the knitting part and before I can even spin I need to prep the fibre. I've been carefully teasing the Arcott fleece first: 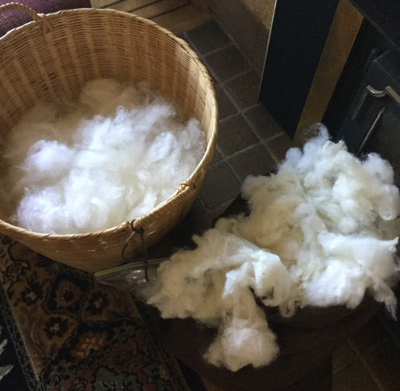 Making big fluffy clouds. Teasing gets rid of quite a lot of the excess VM so I have to do it with a cloth over my lap to catch the debris. It's even better to do it outside! If it wasn't such delightfully sproingy wool I wouldn't even bother with all the work this takes to get it more-or-less acceptably clean. There's also a lot of second cuts showing up. Kind of disappointing actually. There will inevitably be blips in the final yarn. Since there's not enough of this fleece left for the sweater I'm going to blend it with a baby Romney that's much cleaner. It's a tad longer staple and not nearly as sproingy so I'm hoping it will make a smoother yarn than just the Arcott by itself. We'll see. I haven't started teasing the Romney yet but I did experiment with carding the Arcott on my Deb's Delicate Deluxe with the production drum: 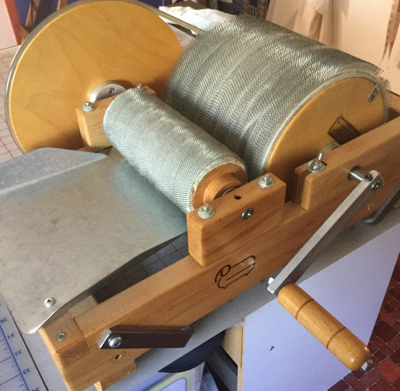 I had an issue with the drive band which has a permanent kink in it. (I bought it secondhand.) 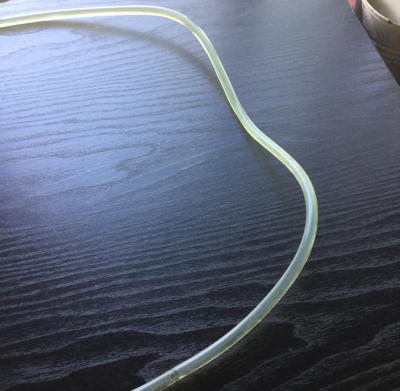 This is the improvement after a session in hot water and holding it taught until it cooled. Better. Then Thom packed the pulleys with painters tape to try to get it a little tighter and stop it from slipping. 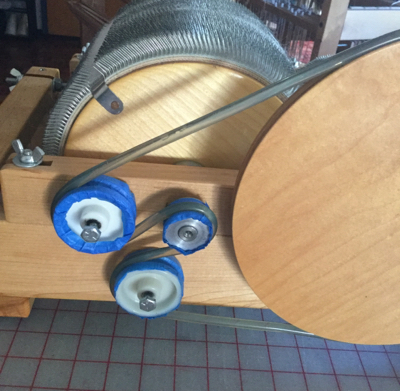 It's improved quite a lot. Yeah, I could try to get a new drive band but Pat Green is no longer making this model and it's kind of a PITA to contact them. Now I just need to remember to remove the band every time I'm finished using the carder. Interestingly my 40-year-old no-name carder has never had a problem with the drive band. Must be a different (and obviously superior) material. Go figure.
See the fluffy batts? 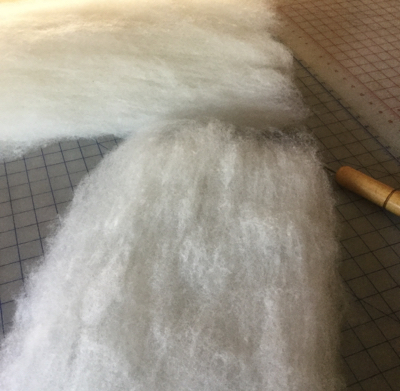 So squooshy! I'll card each of the two fleeces separately before I combine them. This will help get out more of the Arcott's crap first and also make it easier to figure out an even blend. I'm not quite sure how much of each I'm going to end up with yet anyhow.
A friend was wondering why I don't just get all my fleeces commercially carded because that's what she did. Firstly, the mill she used has closed and I'm not happy with any of the alternative options. Also it costs money! Besides I like to prep my own. It's the way I learned because all those lovely tempting braids of dyed wool you see everywhere were not available when I learned to spin. Raw dirty fleece was it. Not even nice soft wool grown especially for spinners either. More like "We have a few sheep and they need to be shorn so here, have this fleece or I'll just throw it out." The good fleeces came later. And not until later still did vendors grab roving out of the industrial process to make it available to handspinners and finally develop small mills to custom process for you. I don't imagine it's a terribly lucrative business. It takes skill and the right equipment and the end product may not be what you want. Anyway, I have my own equipment (carders, combs, hackle) and I know how to use them. And I have the time. Slow clothes indeed!
I seem to be on a sweater kick lately and of course many of them are in fine yarns. Happily that's the kind of yarn I like to spin. I do have some heavier garments in the queue as well but I think I have enough to focus on for now.
Knitting
The Still Dark tunic is coming along nicely. The pattern is actually the Still Light tunic by Veera, my current most popular designer. I'm currently heading down towards the hem. Then I just need to knit the pocket bags and the sleeves (3/4 length) and I'm done. Hah. There's a lot of knitting in this beast but it's mostly just around and around and around. Unlike a lot of knitters who want more excitement in their knitting, I'm just fine with boring.
Because I've been working steadily on the tunic I haven't actually touched my Spring Forward socks in weeks. I only have a partial leg so far. This project takes more concentration so of course it's taking longer. Told you I like boring better!
Sewing
Hate to disappoint but there's nothing new to report on the sewing front. I started to go through my sewing project piles and record the patterns together with their fabrics. Somehow a few things changed their minds (again!) about what they wanted to become. That's what happens when I hesitate at all. Usually though I end up with more satisfying results in the end so I don't mind their rebellious attitude!
What I really need to make is a cover for my iPad to protect it when I'm dragging it all over the place with me. The cover needs a hole for the camera and the ability to fold back and act as a reading stand. There are quite a lot of ideas on Pinterest so it's just a matter of narrowing them down and drawing out the pattern. I also need a hiking bag that holds my iPad (for photography), stainless steel water bottle, sunglasses, keys and lip balm. Now that I no longer have a proper camera I need a different shape than my usual bag. This one is going to take some thought. It has to be easy to sling over my body and easy to access the contents and not flop around or get in my way while I'm walking.
Lastly I need a new knitting bag. Since I've been working on larger projects, I've been using an African market basket but it doesn't travel outside the house. For mobile knitting I don't have a convenient way to pack all the supplies and the work-in-progress. My lunch boxes are great for socks, gloves, hats and shawls but even my larger tote bag isn't big enough for big sweaters. And it would be nice to have a pocket for the pattern so it doesn't get so wrinkled. This is another complex design opportunity and I want to finish all these before we head off on the big cross-continental trip in August.
More details to come. Off to start threading the loom.

You are so right about how we used to get fleeces. It was kind of magical to take a smelly unskirted fleece and be able to turn it into squooshy soft yarn. I haven't spun in quite awhile but seeing those lovely batts makes me think I should get the wheel out.

The band on my Patrick Green carder totally disintegrated (It sat around unused for years). Rather than pay the high price for a new band from Patrick Green, I went to a local small machine shop and they made me a band for a very reasonable price. I took the carder with me so they could ensure the proper fit.

Hmmm....Heather, you could spin your stitching threads! That would be so cool.

And thanks for the tip, Anita. So far our fix is working but I'll keep the machine shop source in mind.