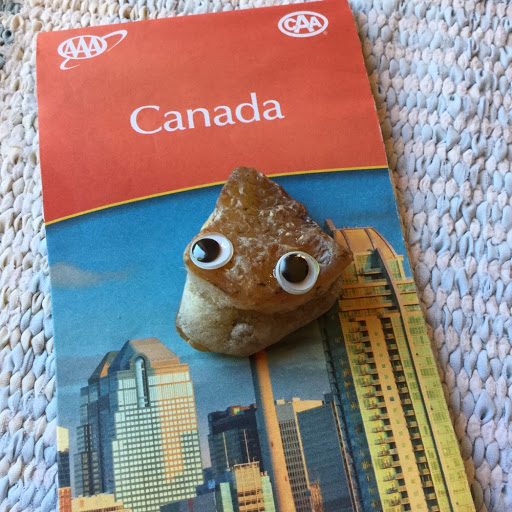 She's an agate rock we brought home from a trip to Haida Gwaii. (Ummm...the eyes appeared later!) She's going to accompany us across the country to another island, Newfoundland. It's nicknamed The Rock so we thought instead of ocean water like we brought last time, this time we'd exchange rocks. I think Aggie is looking forward to the trip. I know we are! She just might show up in a few photos on the way too. You never know. Stay tuned.
So we're nearly ready to go. We've been invited to leave 2 days early (tomorrow!) to meet up with Thom's brother and sister-in-law at our first stop, Kettle River. It'll be lovely to spend a couple of days with them before they head home and we head off on our big adventure.
And one last bit of news, I finally finished those darned Spring Forward Socks! Just under the wire because I didn't want to bring them with me. They are washed and blocked but not photographed yet. I think it might have to wait until October! Oh well. They're a wee bit tight. I can get them on but they're a struggle to get off again. Hopefully they'll loosen up a little now they're washed since superwash wool tends to grow somewhat. I think the reason they're snug is because I used my Knitter's Pride Kubics dpns which are very slippery. I tend to knit tighter with them as opposed to bamboo. I like those needles a lot though so I'm not considering that a problem. It also could just be the stitch pattern pulling the fabric in and making it a little less stretchy than stockinette. Whatever, I'll wear them anyhow!
Waving goodbye for now. There will be radio silence until I can get wifi again. Who knows where; who knows when. I'll be saving up posts so you may be getting several at once. It'll be a surprise for all of us. Heh. Meanwhile here's wishing you a lovely rest of the summer! Stay cool.

{{{WAVING}}} Have a wonderful trip Louisa!

I love your intention of trading rocks from the furthest points east and west in Canada!

I hope you have a fantastic time!! Enjoy all those rocks, trees, fields, lakes, and that other ocean. Yippee! Oh, and the people!

Kiss a cod for me. Drink a Screech cocktail for me. Bon voyage.
Vancouver Barbara

Greetings from Elkwater, Alberta! Thanks for all the good wishes, my friends!