Yeah, I know everybody claims to always be busy, don't they? Such a cliché! For me it's been a whirlwind of social engagements alternating with attempts to catch up on things that need doing before we take off for 2 months. I'm so far behind and I'm trying not to panic slightly. The important stuff will get done and the rest doesn't really matter.
Still on a bag construction kick (though not the one I'm supposed to be sewing), I started a "boro" stitched Japanese knot bag at my Spectrum Study Group: 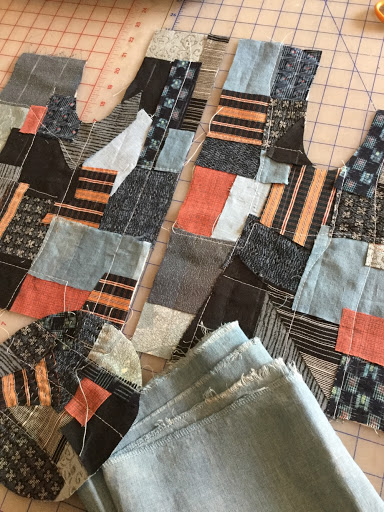 The fabric scraps are from a small pile I collected from sewing show booths. You know, the dealers who buy up old kimono and obi and sell them chopped up in packs of coordinated scraps. I added some woad dyed samples from a workshop I took with the French Woad Masters (the late Henri Lambert and his wife Denise) a number of years ago. The lining is woad-dyed linen/rayon. So nice to find a use for such pretty bits and bobs! The bag  I chose has a circular bottom creating a tubular shape. The white stitches you see are just machine-basting to help hold it together until I'm finished the wonky sashiko stitching in perle cotton. Now I'm deciding whether to take this project with me to work on. Question: how much quiet down-time will there actually be whilst driving 10,00 miles?
The big travel project however is the Intersect sweater by Norah Gaughan (for Brooklyn Tweed): 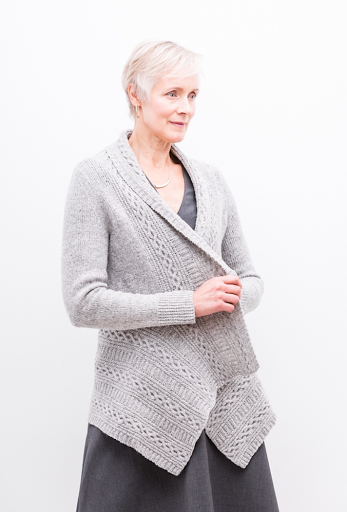 (Isn't the model lovely?) If you recall I began by teasing and carding 400g each of Canadian Arcott X Rideau Arcott and local baby Romney into a nice homogeneous blend.  Then I spun the wool into a fingering weight 2-ply with a forward woollen draw. I got about 3000 yards but it reduced somewhat with further processing so I ended up with about 2,800 yards. Hopefully that's going to be enough!
The poor yarn had to go through so much to finally get the white dyed to the final colour! First I had to scour it which took two soapings and several rinses. Then I mordanted it in 600g of rhubarb leaves that I'd saved in the freezer from the spring harvest. There were 7 skeins, too much for one dyepot so I had to split the mordant into two equal pots. 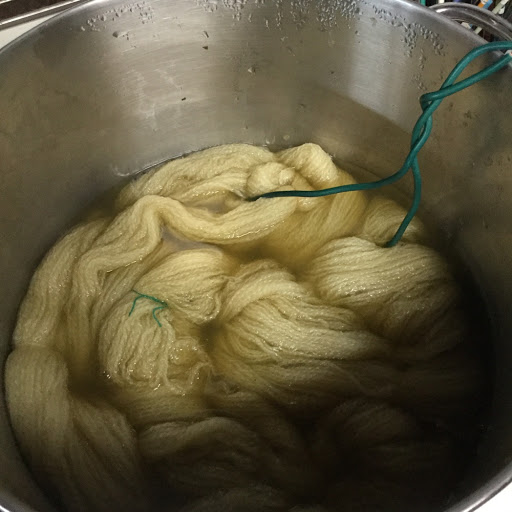 After simmering for an hour and letting it sit overnight it took at least 4 more rinses to get out the excess mordant. Rhubarb leaf puts a yellow under-colour and I was hoping I would also get some of the burgundy-brown effect that I've gotten in the past when it is overdyed in madder. I used my whole remaining 2012 harvest of madder root but there wasn't enough so I topped it up to 30% WOF with purchased madder from Maiwa. After soaking the madder overnight I did 4 extractions, combined them and added 5ml of calcium carbonate (chalk) to the bath because our water lacks hardness which is beneficial to madder's colour. Then I divided the dye between 2 pots and repeated the low-simmer and cooling process. This time it took at least 6 rinses for the water to come clear! Poor wool. Totally abused.
And I got a much brighter orange than I expected when I was all done. I think I didn't use enough madder. But the colour is still really pretty even if it just about glows! I'm calling it "Flaming". You can see from these two skeins the difficulty I had untangling the matted wool yarn. On the right is before and on the left is after I spent forever parting all the stuck strands. I had to be gentle enough not to break the yarn, which I did only once when I pulled too hard. 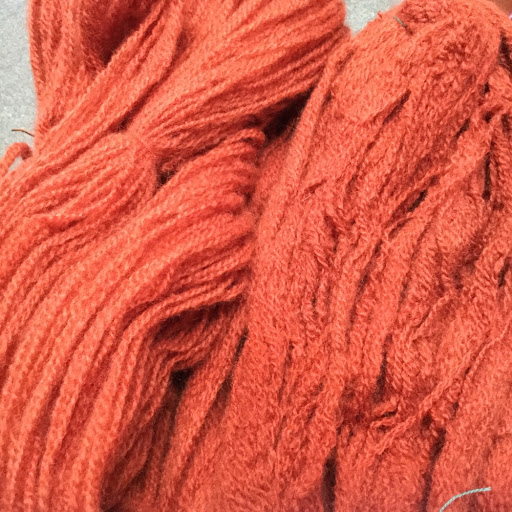 Heck, this represents hours and hours of my life carding and spinning so I wasn't going to give up on it! The skeins are still somewhat stuck together so I'm winding the cakes very carefully. On top of that, there's madder dust that didn't sift out of the dye stuck in the yarn and it sheds off as I wind leaving drifts everywhere. 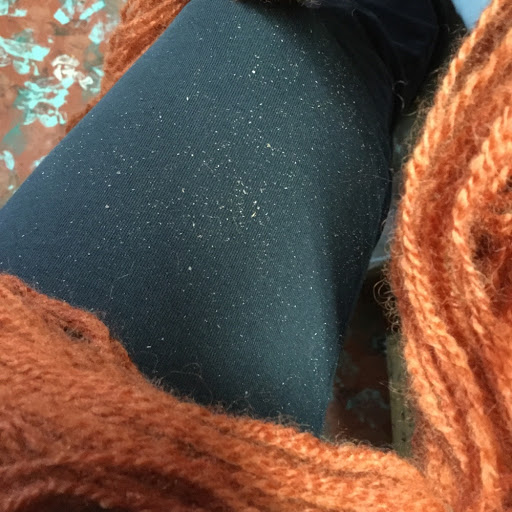 See my black pants? Fun. The final rinsed and dried shade is hard to capture accurately with my iPad but this cake is closest to my eye: 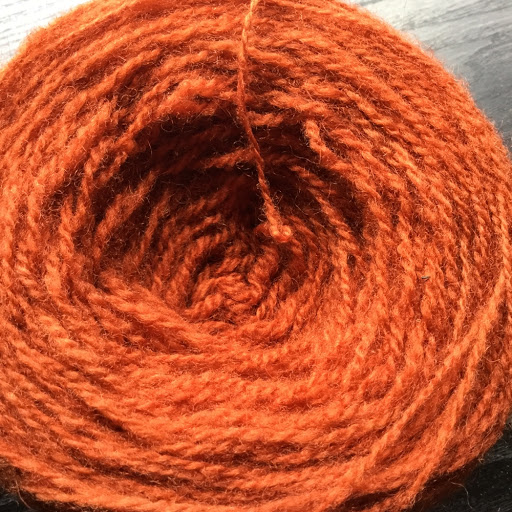 The handspun yarn survived, a little fuzzier than it was before but stil intact. I bet it won't pill easily now! So then I leaped into starting my Flaming Intersect sweater, which is still just a tiny piece so more later. I also finished my Falklands Flare sweater this weekend and don't have any final pics yet. I have to stop gallivanting about.
Speaking of gallivanting, I was invited to another blogger mini-meetup! This time we lunched at the vintage Sylvia Hotel by English Bay and then repaired to Dressew for some stash enhancement after which we crossed Hastings Street to Atex for a little more stash enhancing. I hadn't been there before and found it very nice with lovely fabrics at very reasonable (but not super-cheap) prices. I paid $14.95 per metre for linen.
Oh you want to see who I was playing with? Here we are in the Sylvia: 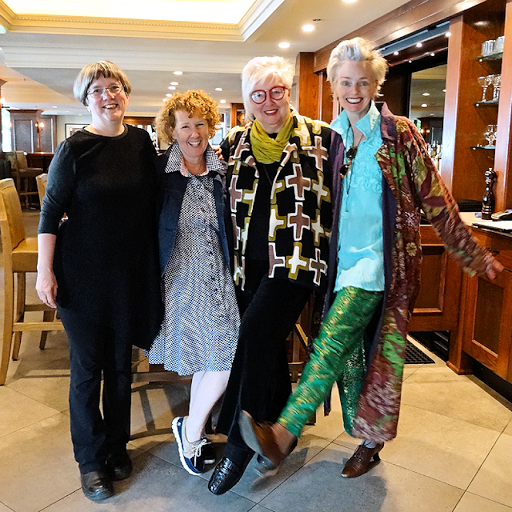 From the left that's me, Sue (A Colourful Canvas), Barbara (sadly no blog herself but she follows a lot of them!), and Melanie (A Bag and a Beret). Photo from Melanie's camera and kindly taken for us by a hotel employee. We had such a blast! Such delightful, thoughtful, intelligent and hilarious women. I don't think we stopped laughing and smiling and talking for a moment. My advice to the envious - find your tribe and make a date. Even if like the introverts among us you feel a bit of a  "social hangover" later, it's totally worth the effort.
Yes, I bought more fabric. No, I didn't photograph it for you. I'm feeling a smidgen guilty because I can't sew any of it until we get back. I'm supposed to be making my hiking bag. Yup. Better get started. I'm running out of time. Sound of me running up to my studio...swoooooshhhh...

Holy cow, Louisa, I absolutely love that boro-stitch bag. What a beauty and it's not even done yet. Haha, yes, we never seem to do what we should be doing.

The rest of the post is written in alien for me but I can say this: I love the colour of the wool. Get your woad on, yeeeah.

I had so much fun with you last week. Let's not wait so long for the next meet-up.

Awww...thanks, Melanie! Sorry about the alien stuff but I need to remind myself what I did or I'll forget. Like I forgot that I missed out a step that would have given me the colour I was actually aiming for. Doh. Oh well.

Yes, we need to have more regular meet ups because it's so dang much fun!

I am exhausted after reading all that your are doing, Louisa. And it all looks gorgeous. As well as inexplicable, to me anyway. And I am so jealous of your meet-up! I want to be there too. Can't you guys do a mid-west U.S. one???