Hello, my dears! Please bear with me as I try out yet another blogging app on the iPad. This one is very simple to use so far. I have high hopes for it.

It's been a busy week here in Damselfly's Pond. Well, maybe it doesn't count as particularly busy for some people but for us it felt pretty full. Several long walks, a dental appointment and I even got to show off my Flaming Intersect cardigan at my weavers' guild meeting. I think it was rather well received!

In knitting news, I'm nearly finished my Midnight On Catalina Shawl (only 2 more loooong rows), started the leg of the second one of the Indigo Skyp Socks (the first is nearly to the heel flap) and am cruising down the yoke on the Red Earth Candelia cardigan. The latter is the sweater that I started with my newly toned-down Intersect leftovers: 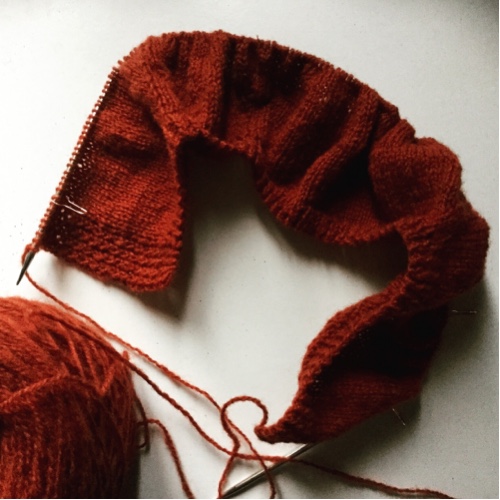 I'm quite happy with it so far. The mods I made seem to be working out alright anyway.

In sewing news, I finished my Boro Knot Bag: 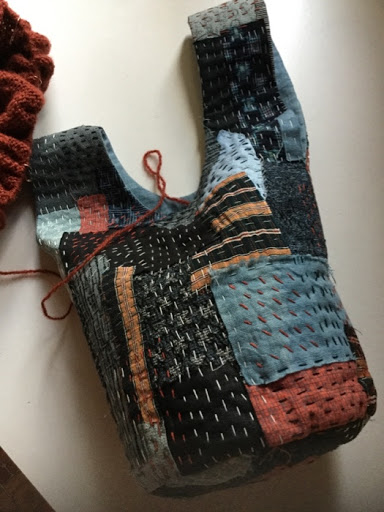 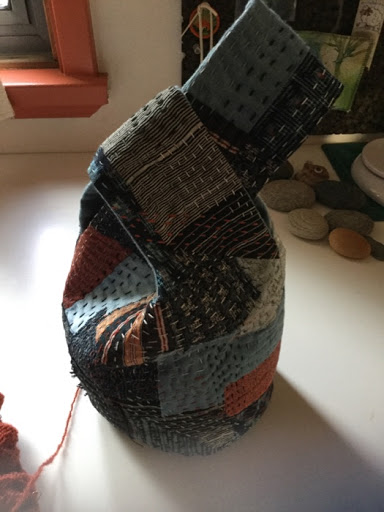 It just fits my sweater in progress - at least while it's still pretty small!

In other news, I've finally gone and ordered a new desktop computer. My birthday present to me! The old one isn't dead but it's still running Windows XP and is having more and more annoying issues with it. It can't be upgraded because it's too underpowered. We can't even remember exactly how old it is but from the available evidence I think it's circa 2002. Yikes! The new one should be here on Monday. It has Windows 10 on it so wish me luck in learning a new OS yet again! Not to mention all the fun of trying to get the important stuff loaded on it. The nice thing is it will be all shiny new and clean. The bad thing is I'll probably lose something that is irreplaceable. Oh well. It wouldn't be the first time. Life goes on.

I was asked why I wanted a desktop instead of a laptop. Of course laptops are more portable and take up less room. But they are twice the price for the same computing power, the battery tends to die eventually and they have limited expansion capability in future. Also most of the laptops these days don't even have a DVD player. Everything has to be loaded by flash drive or downloaded online. I have legacy photos and things on DVD that I still want to access. Desktops also have more ports and I can hook up a much larger screen. And I prefer a mouse to a touchpad. My computer desk is huge so I have lots of room on and under it. So lots of reasons to prefer a desktop. But the biggest one of all is that if I want portability I have my iPad. I adore my iPad Mini 4! It just celebrated its first birthday since I bought it for my last year's birthday present. Hey, I always give me exactly what I want! Heh.

If you remember my little netbook computer, Bluet, the poor thing is also toast thanks to Microsoft abandoning WinXP. It's newer than the desktop but still old enough that it can't be upgraded either. Add to that the fact that I don't need it any more thanks to my iPad filling the need for a small portable system. It served me well. I really feel sad about my computers being obsolete even when they still (sorta) work. But what can you do? I attempt to keep things running as long as possible but even with my best efforts I have to know when to give up. So I'm moving on to a new system and hopefully I can keep it going as long as the last one. You know how short computer years are. As a matter of fact according to this website, my current desktop would be 259 years old if it was human!