I have a new computer! (And no, I'm not writing this on it.) More on this subject shortly. Right now I want to discuss a new FO: 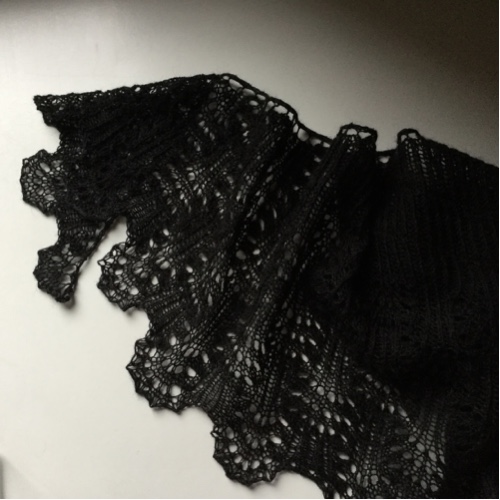 This is my Midnight On Catalina Shawl that I began way back in mid-September. Then I found out it wasn't travel knitting and I could only work on it while sitting quietly. The pattern is by Lana Jois from Interweave Knits Summer 2016 and comes in both a larger and a smaller size. This one is a little larger than the small size since I did the lace repeat 2.5 times instead of only twice. It's the perfect size for the way I like to wear shawlette tied cowboy-fashion around my neck. I was a little concerned that the lace wouldn't open far enough when blocked but not only did it block perfectly: 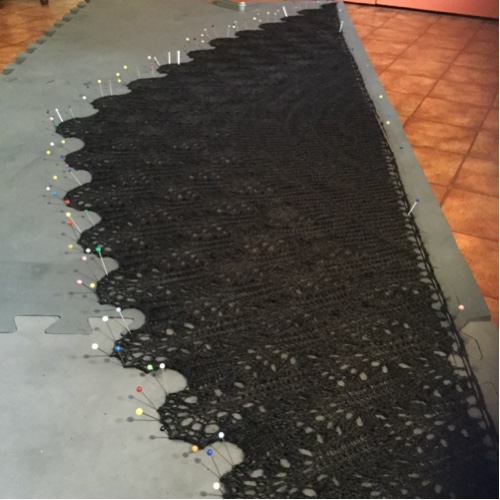 ...it also holds the blocking very nicely. Not every yarn will remain open and flat the way I prefer but this one does. I didn't even swatch it first so who knew? Just some old 2-ply wool from Very Deep Stash and a bit on the rustic side yet it washed up fine. I used a little creme rinse at the end and it may have helped soften the prickle a little. It's comfortable around my own neck but the more sensitive types might notice it more than I do.

Otherwise I haven't done much of anything in a crafty way. Instead...

***Tech Alert! Those who have no interest may tune out now!***

First of all, I want to mention the new iPad app that I'm now using to post to Damselfly's Delights. I'll do anything to avoid using Blogger's native editor. Or their app. Bleh. This is the first one that not only actually works as it's supposed to, but is also easy and intuitive to use. It's called Blogo (NOT "BlogGo" which is one of the ones that didn't work for me) and its only drawback is that the free version works with just one blog. If you have multiple blogs to post to then their paid subscription version is necessary but IMO is much too expensive to consider. I did contact them to say how pleased I was but was only referencing the free version so YMMV, as they say. They did respond quickly and positively to my praise (as well they should) and promised to share it with the development team. Anywho, here we are perfectly posting!

Next up, I want to discuss my new desktop computer: 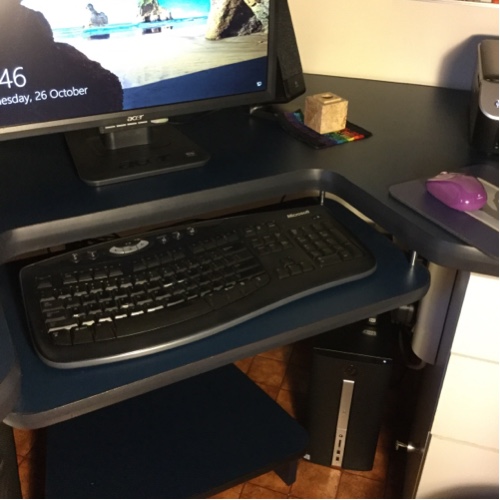 The only really new bit is that black box with the silver stripe down there under my desk. The mouse and keyboard that came with the thing were not to my taste. The keyboard was a dinky little thing not much bigger than the bluetooth one that I use for my iPad with the addition of a numerical keyboard. I couldn't type on it! Kept hitting wrong keys that are too closely spaced. I prefer my big old ergonomic beast of a keyboard, even if it's starting to lose the labels off the keys and needs frequent cleaning out to fix occasional non-working keys. It's comfortable, like an old slipper.

And the mouse was just the opposite - huge! As I've mentioned in the past I have very small hands and much prefer my little wireless laptop mouse. That's fine since I have two of them! Then my old 19" monitor wouldn't hook up to the newfangled cable connection so I ended up swapping for Thom's big 22". Nice! He rarely uses that desktop anyway in favour of his Mac Air. Plus it's still running XP and can't be upgraded. Hmmm...where have I heard that before?

We did finally get everything set up and plugged in to my satisfaction. However I haven't even started to talk about setting up and learning a new operating system. Oy! I happily managed to skip Windows Vista, 7, 8 and 8.1. It was more than a little intimidating to go straight to 10 and since Thom has no more experience with it than I have, he can't really help me much. Good thing I've been using computers for over 30 years, huh? At least it's not completely opaque to me.

The hardest part is getting all the software on there that I use. My needs have changed quite a lot in the last few years, especially since I got the iPad. Believe it or not, in some ways it's far superior to the desktop computer, depending on what you want to do. I prefer the iPad for the web, social media, reading, taking and posting photos and accessing my knitting patterns. I can't put a desktop in my knitting bag or use it to take pictures while on a hike or read with it in bed! On the other hand, the Big Guy is more useful for things like file storage, backing up, document creating and project designing. Plus it can do most of the web/social media stuff as well if I'm already using it instead.

So naturally there have been a few hiccups including updates and software that won't install. I've lost several legacy programs in the switch but retained a couple that I use the most. (One more I'm not sure about yet since I haven't had the gumption to go through the convoluted method needed to install it yet.) I'm learning what new programs/apps there are in Win10 that will substitute for my old favourites and I'm beginning to customize the environment to suit my style. It seems to be taking a few days just to learn how to navigate around and what all the different things actually mean! It's slow going and more than a little nerve-racking. It's also kind of fun! Yeah, I'm weird. But you all knew that.

***OK! Enough technobabble. Back to your regular old crafty blog.***

A froofroo neck scarf??? What's gotten into you? But, it's black, as usual. Damn. Good on you for upgrading!! What an intrusion it is to upgrade, though. I love my ergonomic keyboard as well to prevent the worst of the carpel tunnel problems I get with the 'standard' model. Haven't upgraded to 10 yet because it won't recognize my new monitor, ouch!! Chose a back lit eReader over a Tablet because I like to read. I do regret that I can't download patterns though. Oh well. Looking forward to your new 'blog'.

oh, Louisa you are so brave, I get so-o frustrated with all the upgrades etc. there are days I just turn it all off and go to the beach.

Sharon, black is very sophisticated and goes with everything of course. And it's not quite black, but close. I suspect I have so many small shawls because I like to knit them so much!

All I've changed on the blog is my picture (for fun) and the way I get the content on here. Otherwise it's the same old same-old.

Well I don't think I'm particularly brave, Jean. Just giving in to the inevitable. And trying to keep my poor brain exercised! Didn't you just go through something similar recently? Gee, I'd go to the beach too if it would stop raining long enough!