Well. It's been awhile, eh? Yup, The Crud is still not gone and now Thom has it even worse than I did. Apparently it's the bug that wasn't covered by this year's flu vaccine and is now at mini-epidemic proportions. We are in good company. Bleh.

Meanwhile, back in our winter wonderland, lots of snow and ice still lingers. The city finally sanded our intersection. Twice. But there's a lot of lumpy ice out there still. It rained for a couple of days too but even that didn't make much of a dent in the mess. Not that we care since we aren't going anywhere that we don't have to.

In the midst of all this my sister came down from Haida Gwaii for 4 days and stayed here at Plague Central. She had a dentist appointment and of course attempted to make it worth the flight costs by squeezing in a bunch of other errands. I sucked it up enough to accompany her to my hairdresser and to her current favourite local clothing shop. She goes just a little nuts with all the goodies available in the Big Smoke! It's kind of fun watching somebody else try on all the clothes that wouldn't work on my body. Oh and speaking of bodies, I gave her my Oakmeal Sweater and it looks so much better on her! She hardly took it off while she was here. In contrast I've hardly worn it in the 4 years since I made it. It just didn't feel right on me - even when I lengthened the sleeves. She'll be getting lots of use out of it because she went home to a new pile of snow! I just hope we didn't pass the plague on too.

What else? We've kind of been hunkered down in basic survival mode so not a lot is getting accomplished these days. Except reading and video watching. However yesterday I managed to dig out the fibre for my next spinning and knitting project. Lurking about in the stash I had 3 bags of dyed black roving from Birkeland Bros: 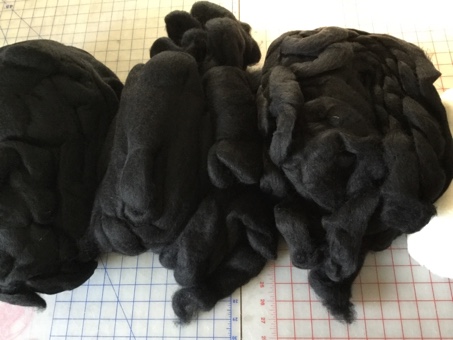 Three different ones marked Perendale (the newest one because the label has the new owner's address), Cross-Breed and just generic Wool - a little over 1200g total. They are very similar but the Perendale is slightly coarser and the Wool is slightly softer than the Cross-Breed. I decided that dead black was too boring plus I needed to blend all the fibres together anyhow so I carded up a sample and added about 5% white Corriedale (also from BB). I like the slightly charcoal-heathered look with just a hint of the white in there. Unfortunately I didn't like the spinning so much. I decided to try a technique that I saw on the Esther Rodgers Craftsy class - making wool punis off a drum-carder. It worked fine to make the cute little punis: 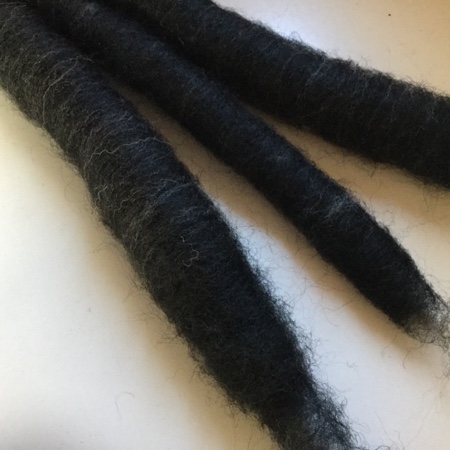 But the spinning on Klaas, my Louet S-90, was really jerky and hard to control. Doesn't help that I'm not very good at long-draw! Midway I switched to a more comfortable short forward draw and had much more control. I'm trying to get a lightweight bulky yarn which is way outside of my comfort zone because I absolutely covet this sweater: 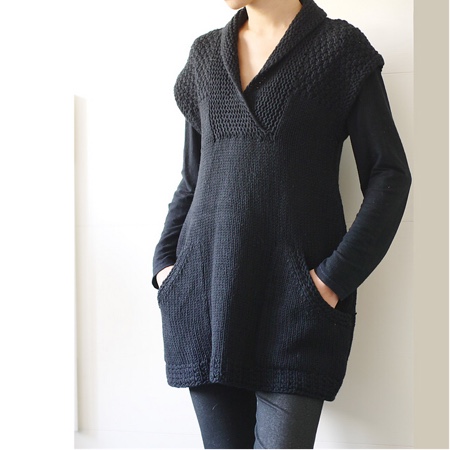 That's Ebony by Cristina Ghirlanda and I love it. Unfortunately I don't love bulky yarn, either spinning or knitting with it. I want this sweater enough though that I'm going to persist. And hope that I can get something that works, preferably before it gets too warm for such a heavy garment. I need about 900 yards or so.

Anyway the sample yarn that I ended up with (and which is sopping wet or I'd show you) after chain-plying my singles is lumpy, a little overplied and probably not quite thick enough. It broke several times while I was plying it which is where it developed too much ply twist while I tried to fix the breaks. I probably also need to adjust the ratio to a larger whorl. It's much too easy to overply while chain-plying because you are doing more manipulating with your hands. On the other hand, I didn't want to bother with a conventional 3-ply which might have been a better choice. Guess it's time for sample number two.

I absolutely LOVE that sweater too!!!! I'd make it a bit shorter for myself - crotch length I think or give it open vents at the side but otherwise, gorgeous!!! And I think it would be terrific in 'rustic' yarn. Can't wait to see it.
And get well. Ginger/honey in hot water for comfort, Tiger Balm if you're coughing.
I've been staying in too. I can get out but getting back into the drive is impossible right now. And the parking lots are so slippery - my balance is not good with one wobbly pin unless I find a buggy close by. I'm staying in, making soup, knitting socks & doing payroll year ends, WCB year ends & taxes already!!!

Lovely weather you're having there. Sorry to hear you've both been captured by the Crud. It's been very cold here, so cold that it can't snow or anything. The sweater you're after does look fabulous. I have no idea what you're talking about, but I'm sure you'll get there.