How bad is it when you have to go back and check your blog to remember what you talked about last time? It was over a week ago! Pretty bad, huh? Well, here I am - not completely over the Crud. (And yes, my poor sister took it home with her. So sorry, hon'!) The weather has changed to much warmer and with bouts of torrential rain. The snow and ice that we've had since December 5 are finally melting but it's going to take awhile to get rid of some of the deep pockets. The city finally got its act together and sanded everywhere like they should have done a month ago. I only slipped a little when we went out on Monday. It was worth it for a sushi lunch, tea purchases at Murchies and a Purdies goji berry and cocoa nib chocolate bar! Yum.

So where was I? I've named the spinning project (for the Ebony sweater) Licorice Bulky because the wool rovings before they are carded and blended look like black licorice allsorts: 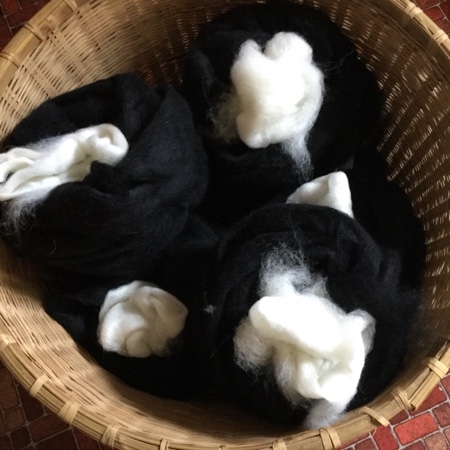 Don't you agree? Each bundle gets torn apart into 6 equal piles and carded first without the white added and then recarded again with white spread in randomly. The resulting batts are then Z-split and drawn out a little into an airy roving ready to spin. I'm not even halfway through the carding yet and I already have one big basket full ready to go. The processing is slow but I want to get it all prepped before I start spinning.

As for the sampling, you might remember that I wasn't happy with my first sample from the puni/rolags. The second sample was spun short-draw from the carded roving and I had a lot more control so it's much more even. The singles was then chain-plied on a lower ratio than the first sample. It came out light and very bulky: 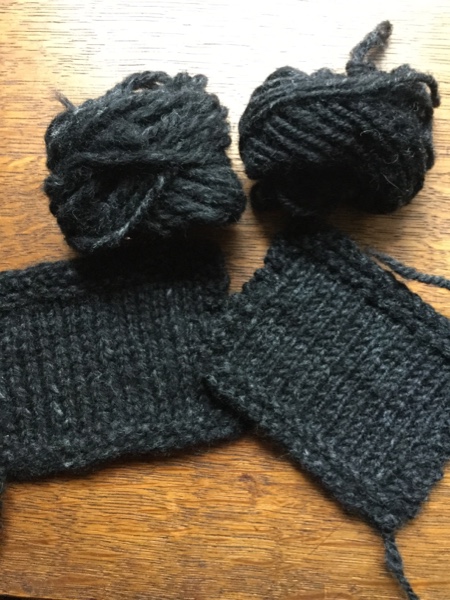 Sample 1 on the right and Sample 2 on the left, knitted up into swatches on 5.5mm needles. The gauge was nearly right but both have too many rows per inch. The swatch for Sample 2 is rather thicker though not as crisp as Sample 1. After this I decided I was on the right track with Sample 2 but it really needed to be a little less bulky so I tried again doing everything the same but drafting just a little finer. 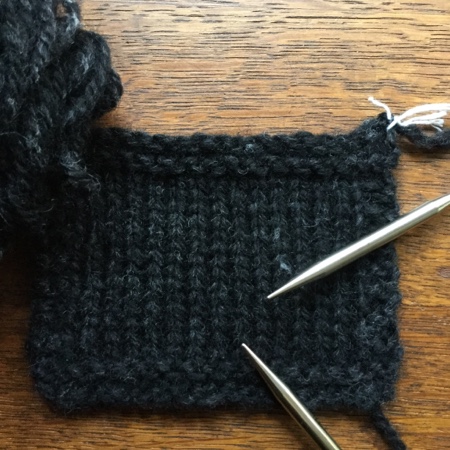 Sample 3 is visibly thinner than Sample 2 but because it was knitted on larger 6mm needles it actually matched gauge much better. It's still bulky but not too heavy or dense. The Goldilocks Sample! Yay. Now I just have to make about 1000 yards more of it...

And that's all before I can even start knitting. Will I have this sweater done before it's too warm to wear it? Does it really matter? Slow Clothes. Definitely.

What else? Yesterday morning was the opening of registration for the Association of Northwest Weavers' Guilds conference, coming up in late June/early July in Victoria, BC at the University of Victoria campus. For the first time in absolutely ages I decided I would go as a regular attendee so I was right in there online to get the 2 seminars that I wanted. After a few bumps (it wouldn't accept my credit card at first) I'm good to go. Four of us are going together and will share a "cluster", 4-bedrooms, 2 bathrooms, 1 shower plus living/kitchen area in the UVic residences. Now all we need are the ferry reservations because it's going to be over the Canada Day long weekend. Yikes. Probably the craziest time of all on BC Ferries.

Mostly I go to these events to catch up with old friends, ogle the wares in the vendor hall and peruse the exhibits. (Which you can do without an entry fee.) There isn't as much of interest to me in the workshops/seminars area but I managed to find a couple of possibilities. Plus for your money you get a fashion show, banquet, keynote speech and optional strawberry tea. It'll be fun. And now I need to buy a new rolling suitcase.

Not much else exciting has happened around here. I'm nearly done my Tow Hill blanket and haven't run out of too many of the yarn colours yet. Maybe 8 or 10" left to go. Haven't touched any of my other projects but I have already read 9 books so far this year. What does that tell you? Lousy weather and the Crud combined to keep me home with zero energy or ambition. Sigh. Luckily this year on my Goodreads Challenge I pledged 150 books! Though maybe it should have been even more? Last year I surpassed my 125 pledge and read 139. I'm certainly off to a good start but I'm sure I'll be out in the garden again once the weather clears up and I'm well again. We won't be travelling for 2 months this summer either.

We watched some TV too but only a couple of hours max in the evening. I have to say I'm loving Netflix now that we have it. So many good shows that regular network television never had. I absolutely love the way you can watch whole seasons one episode after another. We just finished bingeing on "Trapped", an excellent murder mystery series set in a remote village in Iceland. In winter. Even with the subtitles (dialog in Icelandic, Danish and English) it was a riveting character study with a completely unpredictable plot. So good. Some similarities with "Shetland", another great mystery series from the UK which we've also watched recently. What is it with my fascination with remote island communities? Luckily in real life the crime level isn't quite as crazy, eh? At least one would hope. Heh.

I'm sure I'll get some enthusiasm back very soon. Meanwhile back to carding!

"Shetland" was a terrific series!! I have the audio books the series was based on by Ann Cleeves - I see there's a new one - as well as the 'Lewis' trilogy by Peter May. I love British mysteries. The actor who played Jimmy Perez is wrong, he should have olive skin & dark hair!! Glad to hear you're getting over the 'crud'. I know TWO people who've been down with it for a couple of MONTHS. Get well soon!!!