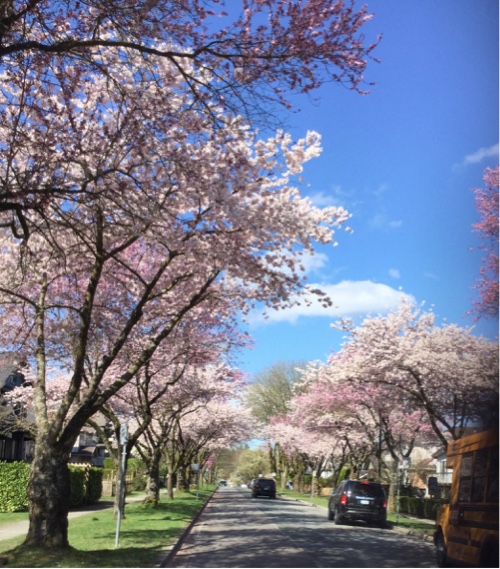 We are finally in full-on cherry blossom season around here! This photo was taken a few days ago on one of the few nice days we've had between the rainy ones and the petals are already starting to make pink and white snow now. Our spring weather is still running several weeks later than usual and I haven't even started planting my seedlings in the garden yet. Better be soon though because they are starting to outgrow their little flats and I don't want to have to repot them all again. My task is set for this week!

Meanwhile, I finally FINALLY finished knitting the Isabel Likes Espresso cardigan. Yay! It took over two months of pretty steady knitting and you've already heard my lament at having to reknit the sleeves so many times. I will show it off when it dries since it's currently being wet-blocked. Not an easy task because the sweater's shape doesn't lie completely flat no matter what I do. I turned it over when the fronts were nearly dry and opened out the collar/front bands and put a couple of small glass jars on the curling collar to hopefully flatten it a little. It's still going to roll somewhat anyway but that's the nature of the K1/P3 slip-stitch rib. It's mostly reverse stockinette so of course it rolls to the side with all the purls. More on this FO soon.

Now I'm really trying very hard to resist casting on another sweater from my queue. At least until I've finished something else. I've picked up the green Spring Thaw shawl again in hopes I can get it done soon. The poor thing has been languishing as a wee little triangle for months. It's not a difficult knit but needs some watching and chart reading so I can't just knit and read a book at the same time. I know others get bored with plain stockinette but I can knit miles of it without really looking but I really bog down when I have to pay attention. So I usually have a plain project on the go at the same time as a more complex one. Right now that's the After The Melting socks that have also been languishing along with the shawl. Hopefully I can get some real progress going on them now. Preferably before I can't stand it any more and cast on another sweater!

Speaking of progress, I've recently discovered that knitting progress markers really work. When you're knitting on something that doesn't seem to be getting any longer, a marker that's popped on at the place you begin knitting that day shows you how far (or not!) you've gotten when you put it down. I got a few more lobster clasps from the bead store and made myself a whole set of progress markers: 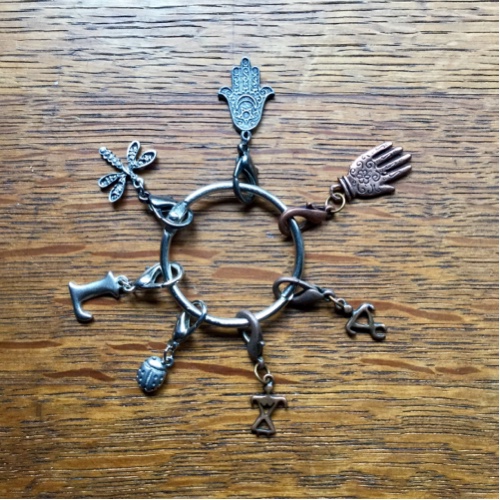 The copper hand was instrumental in helping me finish that last stinkin' sleeve! All these charms were out of my ancient bead stash. I'd forgotten about the cute little petroglyph male and female. I think they were supposed to become earrings which I no longer bother with. In fact I don't wear jewelry at all anymore for some reason. Feels too fussy maybe? For starters I can't even wear my wedding ring without getting dermatitis under the band. Bleh. Instead of "statement" necklaces I wear scarves and shawls. Of course that means that now I have a boatload of bead supplies that I'll likely never use. Unless the beads are large enough to thread into my knitting. Surprisingly I don't have all that many that are suitable.

Even though I've been very resistant to shopping, somehow this last month or so I have been indulging in some crafty purchases. There was all that Cloudborn yarn from Craftsy, the wool roving from Fibres West and now I've gone and bought a rather weighty book from Maiwa Supply on Granville Island: 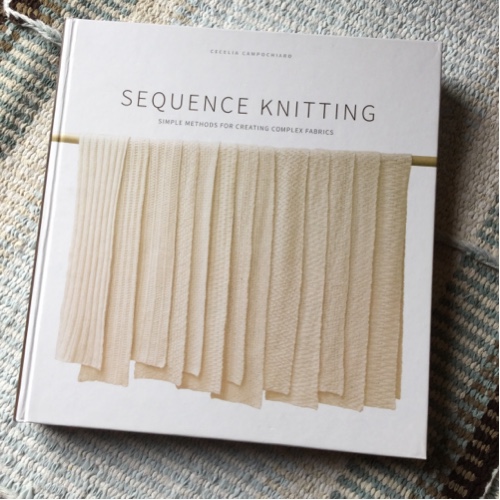 Sequence Knitting: Simple Methods for Creating Complex Reversible Fabrics by Cecilia Campochiaro. Here's the Ravelry link so you can see the patterns. However, I didn't buy it for those but for the technique and the swatches. This is like a master's thesis in mathematical progressions using the binary of knits and purls in a relatively simple way to create textures. As far as the author knows, nobody had done such a complete study of this idea before. Personally I'm allergic to math unless you add something crafty to it! And this is fascinating. I would love to take some of her swatches and use it to create garments (or parts of garments) rather than small accessories like her scarves, shawls and hats. Might never happen. But meanwhile I can read the book and maybe play with the ideas.

I've also managed to purchase two sewing patterns in PDF. Since I haven't even begun to dig through my sewing and reorganise my queue, I'll hold off on talking about them. Suffice it to say that I love the instant gratification of getting the pattern online but then the process slows down while I print and paste and trace and adjust before I can even begin to cut out fabric. And I'd best get to sewing really soon if I'm going to have anything to wear at ANWG in Victoria. There's only a little over 2 months to go.

Before we head off to Milady Daughter's for our Easter dinner, I'll leave you with more lovely sakura. Vancouver's skies are rarely quite this blue! 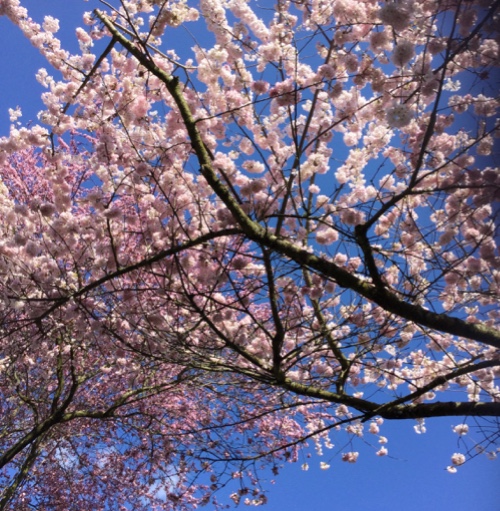 The blossoms are beautiful, especially against a blue, blue sky. The temperatures appear to be heading a bit higher this week, at last.
I love your industriousness and the names of your projects. The placemarkers are a fantastic idea too. As for the book, how I wish that math in school was taught linked to something of interest like crafting. I love that cover photo. Happy Spring, Louisa.

Awww...thank you for your kind comments, Mel! Happy Spring to you too!