To Garden or Sew?

Well! Our weather has finally started to feel more normal for May. Sunshine! Warmth! So of course we've been madly trying to make up for lost time in the garden. I have been literally falling into bed and going out like a light! And we still aren't where we should be. I won't say "finished" because no garden ever is completely finished. But we are weeks behind this year thanks to the unusual cold and the record rainfall we had.

Anyway I gave my dye garden some sea soil and fish fertiliser love this morning and I'm hoping the poor things will start to grow properly again. 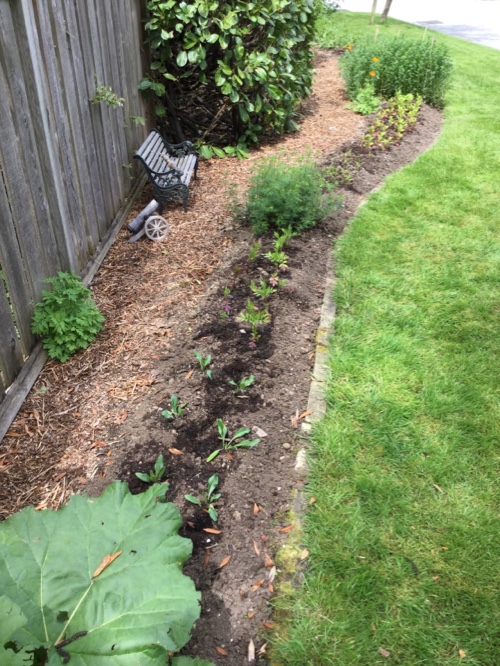 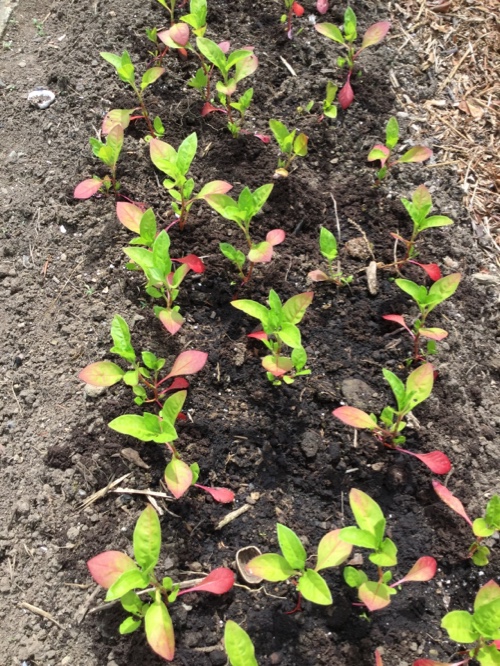 See the red leaves on the Japanese indigo? That's from the cold they suffered. In my defense it was warm enough when I planted them! How did I know it would chill out again right after? They're pretty tough however and in past years managed to survive even a hail storm or two. (It missed us this year! Yay.) I'm hoping they'll catch up.

The tomatoes and cucumbers are in now and there's just one bed left to dig before I can put in the squashes. No hurry though. I think the neighbours suspect that we only grow poppies, violets and Spanish bluebells in our veggie garden: 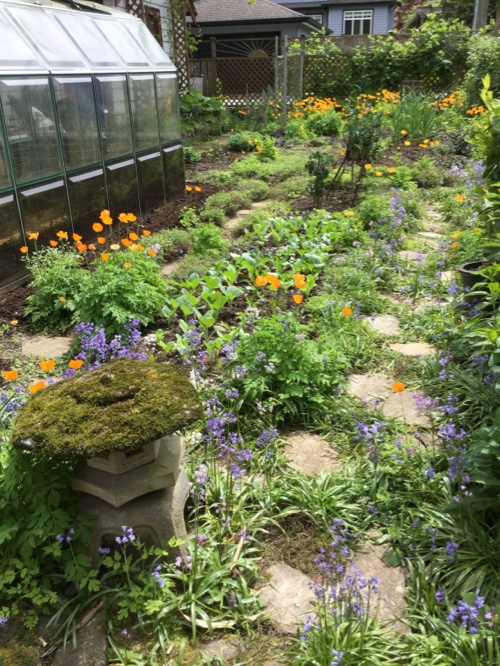 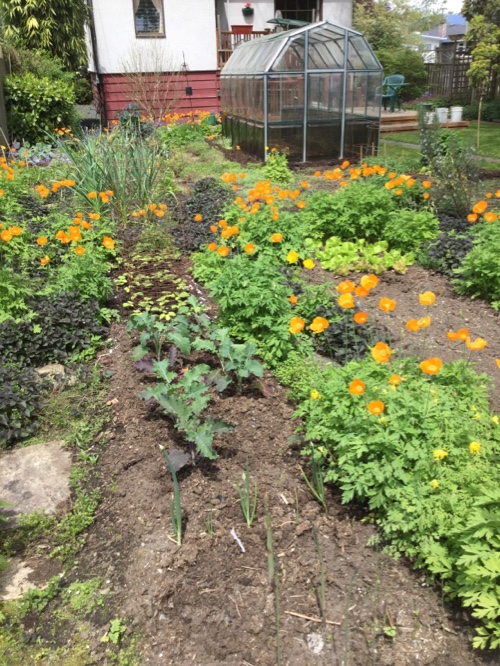 Not true! There's food in there too! But they sure are pretty though, aren't they? It's late for the bluebells. I'm usually pulling them all out by now after the flowers finish. Doesn't hardly slow them down any! The poppies are perennial Welsh poppies and most of them are orange although there's a patch of yellow ones towards the back of the garden. We try to keep them under control but don't always succeed! There are lots in our front garden as well. We never planted them originally. They just magically appeared many years ago. Kind of like the cornflowers, foxgloves and of course, the bluebells. I do however know where the white alyssum, lemon balm, oregano, daisies, feverfew and the occasional weld plants that show up where they're not wanted came from. My penance is to weed them out - along with the "real" weeds.

Luckily we both enjoy gardening a lot. It's creative exercise! Better than going to the gym and sometimes there's a good meal or a pretty dye colour to be had from it too. Not to mention the enjoyment in just feasting your eyes on the beauty. We often get really nice comments from passersby when we're out there mucking about. Worth all the fun!

So I'm pretty happy that we're getting stuff done in the garden but not so much in my studio. Yet. I've got 7 garments cut out and only reduced the fabric piles by less than a quarter! (Many more to go.) I cleaned and oiled the sewing machine and serger and vacuumed the floor. Thom replaced my serger knife for me after the old one got too dull. Since I couldn't figure out which item to sew first I began instead with some mending. Just to get the juices flowing, right?

One pair of purchased (back in the '90's?) cropped pants need the elastic replaced. I'm pretty annoyed with any technique that sews through the elastic because you can't just attach new elastic to old and pull it through the casing. I'm having to pick out not one but three separate rows of stitching to free the old elastic: 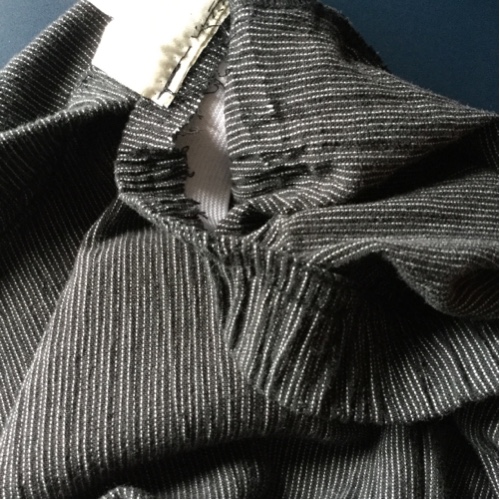 I couldn't just run another elastic on top either. You might wonder why I'm bothering but I love these pants. They are light, cool, wrinkle-free and I love the black and white striped crinkle fabric. I'm hoping to get another few years out of them anyway.

By the way, the commercial tag on the pants reminded me that I have finally after years of debate with myself ordered some personal woven ribbon tags for my makes. I'll tell you more about them and where I ordered them from when I receive them in the post. And if I like them, I might just order more of the same design in a different colourway. So exciting! I got seriously tired of spending time making tags that didn't hold up well over time and laundry. But I would like to mark my clothes as mine in some way. These will do it in style.

There was a dye project. If you'll remember my snow-dyed hemp/silk fabric from this last winter: 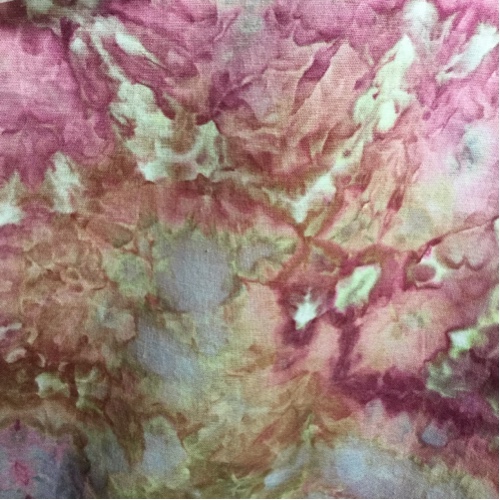 I changed my mind on what I'm going to make with it and needed some contrast fabric to go with so I bit the bullet and dyed the rest of my precious 5 yards to coordinate: 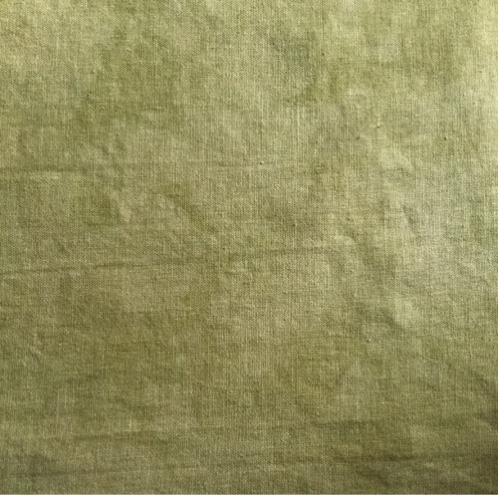 The snow dye used plum, rust and moss Procion MX dyes (from Maiwa) so I used moss alone for the coordinating plain dye. It's not perfectly even but shows some random patterning from being left unstirred in the bucket when a friend dropped by for tea. I like it better that way and think it will do the trick! More about this project when I get to sewing it. It's all cut out already and waiting but I need thread and buttons first. A gazillion buttons in my stash and although there's a good match, there's only 2 and I need 6. Boo. I see a trip to Dressew in my future. I'm compiling a list. Oh, and if you noticed - this will probably be the one time you will see me in anything containing pink. I always say there's no such thing as a bad colour, just a bad place to put it! However, pink is probably the colour that I'm drawn to the least.

Meanwhile there's plenty more to keep me busy! Moving right along...if I can move at all anymore...

I'll take the Pink even though it has that Moss in it!! LOL I love those labels, by the way, I bought them waaaay back in time when they just said Made With Love by Grandma or My Mom Made This . . . I had my name put on them - Designed by Sharon or the best one - Send Home for Washing.

Yes , we are in the same spot too,,, I wany so badly to keep sewing but the garden work is late...having a gardening journal means that you know exactly what it was like last year at this date. We are at least a month behind.
That pink is really beautiful! Same here not fond of pink usually, but with that moss to tame it, success. Can you keep me posted on that label source, I have started selling a few things for my kids friends, and am interested.
The garden looks great Louisa.

I'll be posting more on the labels as soon as they show up in the mail so stay tuned!