Somewhat behind on the blog posting, aren't I? But then, who's counting? Not me! While the weather cooperated I've been mucking about in the garden. I swear it's looking the best ever although there are still some serious issues. You wins some and you loses some, right? The Evil Squirrels and I are still feuding. I've littered the most vulnerable areas with little trays each holding a rag soaked in jalapeno pickle juice. Apart from needing refreshing every time it rains or when it dries out too much, they seem to be working to keep the beasts from chowing down on my veggies. I didn't think to protect my young sunflowers though and one was pulled up and bitten in half. Stupid creatures. I could use more of the trays still but it's hard to eat that many jalapenos! I've also tried other hot and sour ingredients but the spicy pickled stuff seems to work best and at least it's safe for the garden, unlike many of the commercially available repellants. Hate. Squirrels. Hate. Grrr...

Onto more cheerful things, I've also been sewing up a storm. I finished my Katherine Tilton B6138 top/vest in a lightweight natural linen muslin: 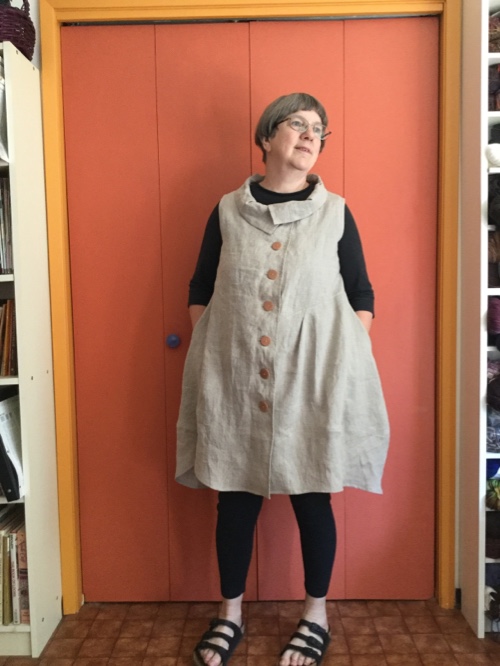 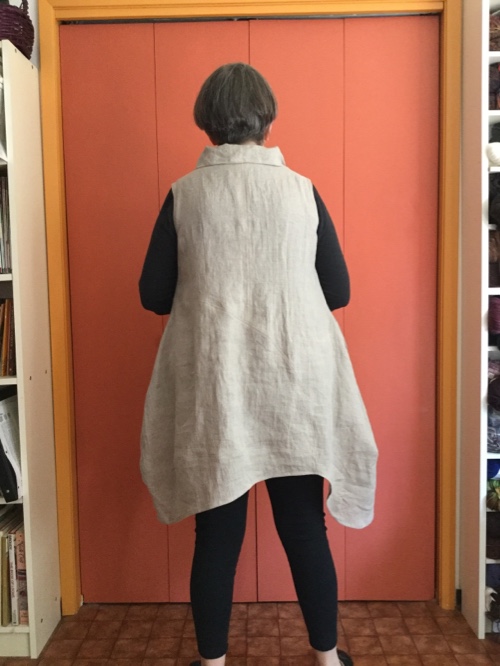 I'm calling it the Sculptural Top because it has such a fun shape. I didn't have any appropriate buttons (the ones I thought would work were too small) and rather than go shopping (again!) Thom offered to make me some on his lathe. I love them! They are dogwood and finished with a polymer coating so hopefully they'll hold up in the laundry. They go nicely with the rustic linen, don't you think?

Other modifications include raising the armholes and fitting the shoulders. I didn't like the way the pattern instructions said to sew the collar on with the inside facing up so I reversed it and I like it much better. This linen of course wrinkles as soon as you look at it but I don't care. I love the stuff. This is a nice light top for hot weather (if we ever get any more) but still with good coverage. And it layers over t-shirts nicely too. 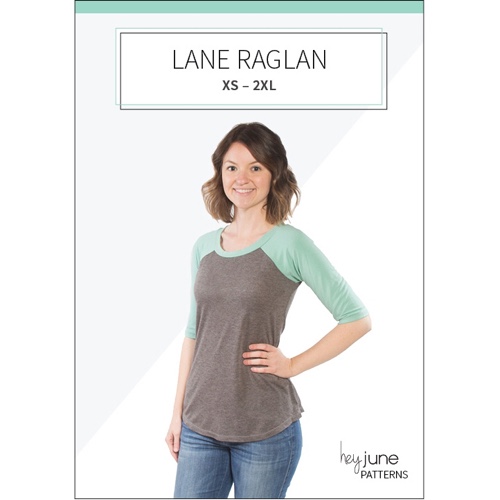 Of course I had to do some fit adjusting but it was pretty easy for a change since the pattern comes with a separate front piece with an FBA built in. I started with an M at the top and after the bust morphed through to XXL at the waist and hip. The sleeves were also too long (no surprise!) so for the 3/4 length I took off an inch though they're still a tad long. I had plenty of fabric, a rayon/poly/lycra interlock, so I increased the body length to what I thought was going to be a tunic with the shirt-tail hem but it ended up a dress! And just to be challenging I included quarter-moon pockets: 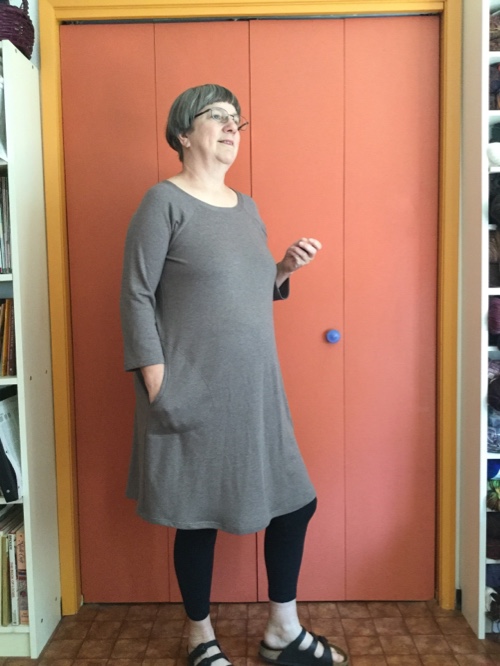 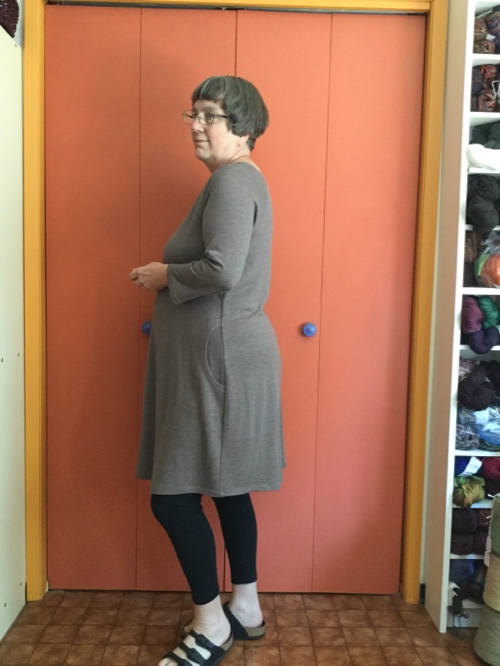 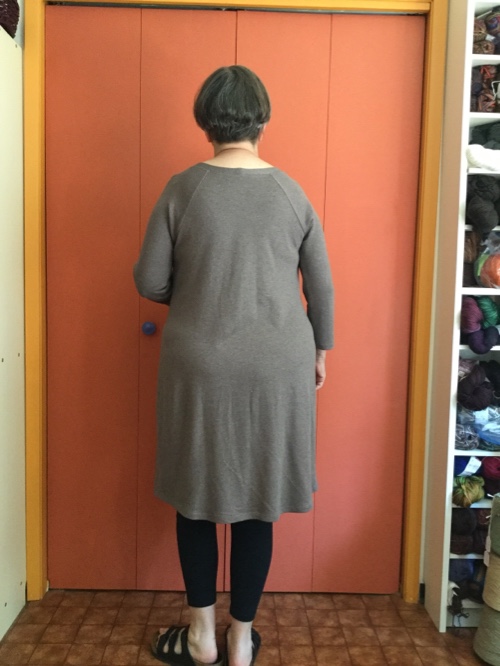 Lookee! More damsel-butt! Ahem. The way I'll probably wear it most often however is more like this: 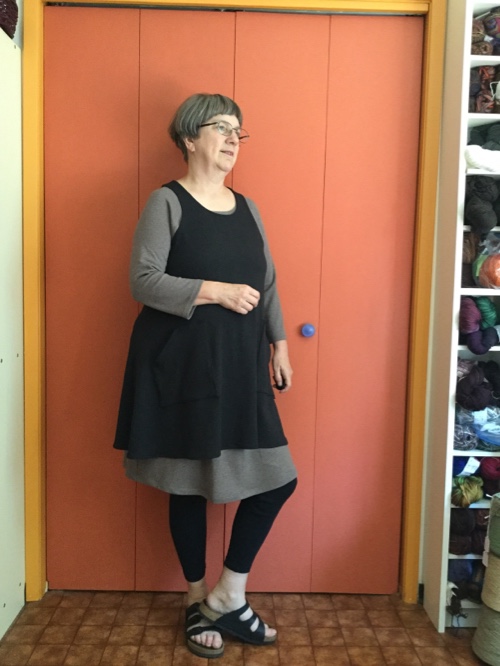 Which of course means I kind of wasted my time making cool pockets. However, I can always revisit that idea again sometime in a future make. I think this not-quite-grey-not-quite-brown taupe colour matches my hair! Now I want a bunch more of these easy-fitting t-shirts in different colours. I've already got a red-orange one lined up.

But meanwhile, I'm still working on pants. Many many pants. Starting with the brown, grey and black nylon/lycra supplex rib fabrics that I bought in the bargain basement at Dressew for $4 a metre. I had to transfer my latest leggings pattern to stiff paper because the tissue was tearing too much. If I'm going to use it a bunch it deserves preservation, right? I managed to get a pair of leggings and a pair of bicycle shorts out of just 1.5 M of each of the black and the grey. I have 2 M of the brown so I may just cut 2 pairs of leggings because I know I'll wear them. And there's at least 4 more pairs of pants I want to cut out. I'm going with the flow. I needed a break from the sewing machine anyway.

ooo,ooo, very cool, Louisa. What a surprise the t-shirt dress was. And the topper looks great over it. You could make one with side slits so you could still use/ see those awesome pockets on the under t-dress. And the Tilton sculpted tunic, wow. With custom-made buttons. You have got it going, girl.

I ditto Pao! As for squirrels, you can make your own mixture using chili oil and water and spray it on plants and surrounding areas. Water pistols are great for this! Ask me how I know.
Vancouver Barbara

Those pesky squirrels! I love them but only because I don't have a garden to guard. I saw one in a big underground parking lot recently and a couple was terrified. Maybe they have a garden...

Your sewing projects are magnificent. Love that first collar on the Tilton piece and the T-shirt as a dress is a fantastic creative switch. I also like Pao's idea of side slits. I can't believe Thom made you buttons. That's true love!

That Pao! She always has the most ingenious ideas! I love the layered look you've created by the way! I've been making tunic/dresses from my Deer & Doe t-shirt pattern. I hadn't thought of layering them as you do, but I really think it would be a fun way to get multiple colours on my bod!

Katherine and Marcy both have such a great design sensibility {WOW...can't believe how long it took me to get the spelling right on that word this morning!} and their patterns seem to love linen!

Have you tried using the fabric designed for tracing patterns? I use it frequently. It's super strong, but lightweight and easy to pin or test fit etc.

Thank you all for the great comments! Mmmwaahhh!!

Thanks for the idea of chili oil, Barbara. I might just try that. What proportion of water do you use? Does it stain anything or can you just spray everywhere?

Sue, I have a ream of large sheets of a lovely smooth heavy paper left over from Thom's days in the printing trade. I only have to paste two together to get a pretty big sheet. That Swedish tracing paper stuff cost bucks!

I ironed all my favorite patterns onto cheap interfacing. It's been 30 years & they're still going on.
I like the three piece look on you. And I like the leggings under tunics too. Good garb for cold houses!! goes well with wool sox & cardis for winter too.

Squirrel repellant (also good against dogs and cats and probably other critters too!)
I would use 1 tsp chili oil (or mustard oil if you can get it) to one cup of warm water. Put it in an old pump spray bottle. Shake well and spray with a fine mist.
I used it outside and on my nice new stair posts that neighbourhood cats were using as a scratching post. That larned 'em!
I didn't notice any staining.
Vancouver Barbara

Thanks, Sharon! I've thought of that especially with some crappy non-woven I have that falls apart in the laundry. Good to know it works.

And I appreciate your recipe, Barbara. I'm definitely going to try this.