Hello-hello-hello! Wow! We passed solstice and it's actually summer now! It's still a little cool here and we've had quite a lot of cloud and drizzle as well as sunshine. But I'm not complaining - it could definitely be worse! The days are long and I've been alternating my time in the garden in the mornings and in the studio in the afternoons. The backyard is mostly in the shade in the morning so it's much nicer to work in then. It's looking pretty fabulous this year if I do say so. It helps that we've both been in a dirt-digging mood. Thom does the heavier stuff and I do the fiddly stuff and it somehow all works out. I harvested my garlic scapes yesterday and the tomatoes are nearly up to my chin in the greenhouse. 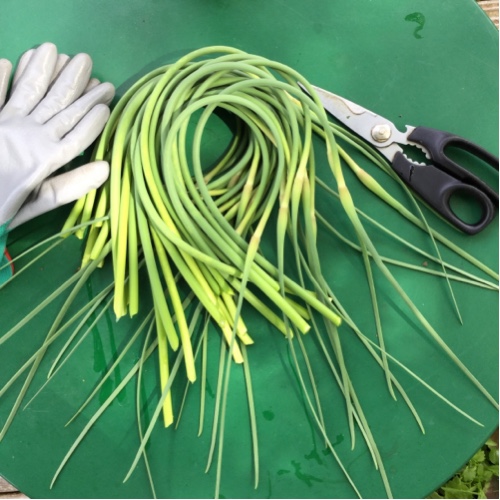 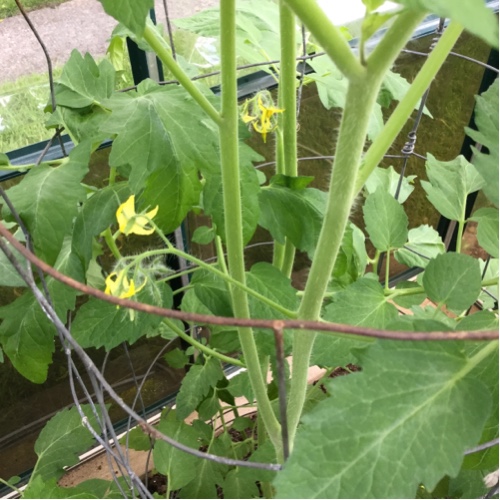 Potential tomatoes! I need to go shake them up to help them fertilize. There's not enough wind in the greenhouse, even with the door and roof windows open.

In the studio I've been madly cutting out a bunch of new basics: 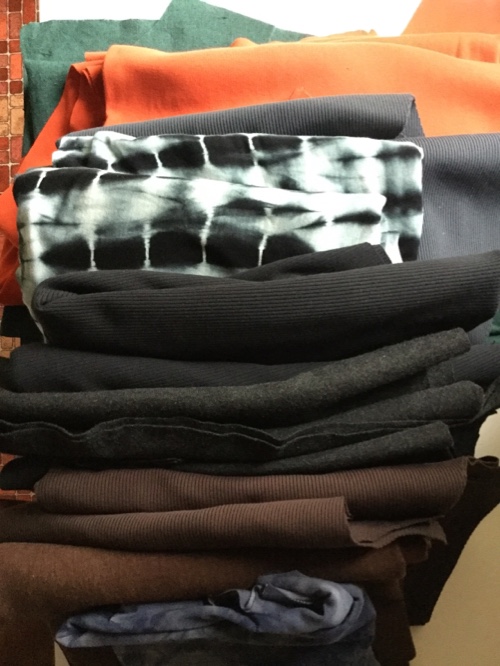 That pile equals 15 garments, nearly all knits. There's leggings, shorts, cropped pants, t-shirts and an over-tunic. (New name for my favourite type of pinafore/apron/tunic/popover/thingy!) I'm keeping them in groups of like colours so I don't have to change the serger threads too often. I hope to whip through these as quickly as I can. There's still plenty more fabric around here and I already have lots of ideas of what to make from it. The me-mades are poised to take over my wardrobe completely. Very soon.

The last couple of days I've been concentrating on my latest Tilton dress. It's finished (and I love it!) but I don't have photos yet so I'll wait to talk about that in another post. One thing I was reminded of though is how much easier it is to sew with a woven in natural fibres. The linen/cotton was easy to cut out, sewed like buttah and pressed like a dream. Not so much like that black tie-dye knit beast up there that refused to lay flat or stay still while I cut it. It was kind of like working with jello. No idea how all these makes are all going to turn out but I plan to make liberal use of the serger and batch sewing techniques. The results are at least guaranteed to fit me better than store-bought anyhow.

Besides my latest dress, I'm not sure what exactly I'll be bringing to wear at the ANWG conference in Victoria. (We're leaving a week today! Yikes.) It depends on how many of these items I can finish and how much will fit in my new suitcase. The other ladies are already teasing me about how much stuff I plan to haul along. In my defense it's mostly not clothes. So I like to have everything I need with me, OK? Hey, I'm used to having an entire Westie with everything including the kitchen sink in it. (Literally!) A 26" case is pretty small in comparison. Just sayin'...

And that's not all that's on the itinerary - when I get back (on our 46th wedding anniversary) I have a day to wash and repack and we're off for 5 days to go camping with the Fambly. And then the evening we get back from that there's a 50th anniversary party for some old friends. Whew! That's a lot of socialising for this introvert. I'm exhausted just thinking about it. Must try to be as organised as possible before next Thursday. Yup.

I am amazed at your stack of projects! Zip, zip zip and you'll be done -so efficient.

Thanks, Heather! I'd be done a whole lot faster if things wouldn't go a teensy bit wrong occasionally. And if it wasn't like the surface of the sun up in my studio. Nope. Not complaining. Much.

Will I get a chance to see you next weekend in Victoria? I need to PM you and set up a time and place.