At Least We Have Pictures

Trying to use Blogger’s questionable online editor today from the Windows 10 desktop. It's the only way to put photos in my posts! But first I had to transfer all my photos from the iPad to the desktop. I am so spoiled for my iPad even though it's easier to type on a proper keyboard. Sigh. Ya wins some; ya loses some. Anyway, here goes... 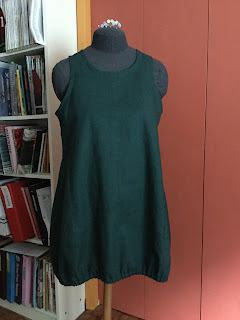 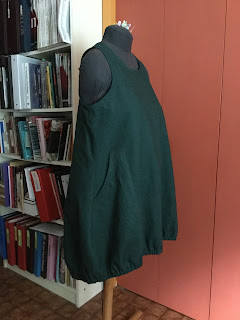 Here's my latest make - the Forest Green Tunic. This piece of coarsely woven cotton fabric has been kicking around in deepest stash for decades. It kind of looks like linen but isn't and it's got multiple weaving flaws in it. I kept most of them on the private side and just shrugged at anything that still shows. The pattern is self-drafted from my basic blocks. It has self-bias binding around the neck, armholes and pocket edges, and an elasticated high/low bubble hem. Just another one of those popover tops I like to wear so much and inspired by something I saw on Pinterest. Nice to use up older stash too. This garment was essentially free. Not counting labour, of course!

I have lots more projects to sew but first I have to finish some of my summer sewing that didn't get done before I went on vacation: two t-shirts (one short kimono-sleeved and the other a longer raglan-sleeved) and some capri-length leggings in a bright orange-red lightweight knit. I may still be able to get some wear out of them before it gets too cold, especially if I layer up. It seems this summer's sewing was mostly about the basics: leggings, pants and t-shirts. It's all good.

I don't want to get too far into cutting out new garments though until I get farther ahead on some of the other projects I've got on the go. There's way more of those pesky UFOs than I usually have at one time! I have two large knitting projects that each are about half done, a couple of smaller scarf/shawl items that aren't very far along, the woven blanket that I started ages ago with the warp only 1/4 wound off, and just the first bobbin of singles spun for the man's sweater that needs a LOT of 3-ply yarn before I have enough to knit it. As if that wasn't enough to go on with, I broke down and started a crocheted scarf yesterday. I couldn't help it! I had the perfect yarn and it just called to me. Must be the fall colours. Sure. 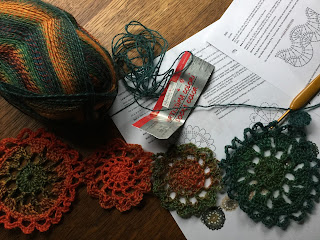 It's called Ripple As You Go, a free pattern on Ravelry by Amanda Mannas. This row of medallions will be attached lengthwise to a ripple-stitch pattern shawl (or scarf, depending on whether or not I have enough yarn!). I'm playing it like golf - play it as it lies - each piece begins exactly where the last one ended. It's addicting. At least crochet is relatively quick and I should have this done in a few days. And coincidentally it coordinates perfectly with my new green tunic. How did that happen?

So this may be the only way to post for the foreseeable future. Let me know if anything isn't looking right on your end, will you? I haven't used this editor for yonks! And there doesn't seem to be any other option that works. For now.

Your post looks fine to me. I'm glad you found a way.
You have so many projects going! I like the tunic, the colour and the cut, especially the bubble hem. I'm glad you found such a great use for that decades-old fabric. And I love how the scarf magically matches. You are on a roll!

I'll just ditto Melanie. She's said it all. And always Brava to you for your amazing ambition.

Thanks, my dears! I just keep on trucking...er, sewing, knitting, crocheting, whatever...