Well, we had a very Happy Thanksgiving with 21 locusts...er, fambly members in attendance. I've made so many turkey dinners over the years that I've pretty much got it down with some excellent help from Thom. Others brought the desserts which saved me a lot of work. My 13-year-old biggest grandbeastie (currently referred to as the Wildling) made not one but two pumpkin pies from scratch with only verbal input from her mom. I was impressed since baking is not really my thing. This girl is going to be an excellent cook someday soon! Anyway, a good time was had by all.

Back to the Bullet Journal thing. I've been watching a number of YouTube videos on the subject and the proponents seem to come from 2 main camps: the girls who want to decorate the heck out of their journals and the guys who want to keep it minimalist. Both points of view have value. It's fun to play with coloured pens, stickers, stamps and washi tape! However the basic plan as Ryder set it out originally is really quick to do and easy keep up. Plus I've heard of people becoming totally intimidated by the beautiful artistic pages they see on Pinterest or somewhere and end up not knowing where or being afraid to start with their own. My advice is start with the basics and add - or not - as you get into it. It's all yours and there are no rules.

You've already seen my beginning notebook. It has lovely thick pages with no bleeding or show-through from pens. But it is blank and I've already had to add a ribbon bookmark. Yes, I did glue it in to the back cover and it works better and no longer falls out. However, I was at my local "general store" (Welk's) recently and they had a whole rack of Leuchtturm1917 notebooks. They also had a smaller one of Moleskines if that's your jam but the Leuchtturm (pronounced something like LUOYSH-torm and it means "lighthouse" in German) is the brand that many, if not most, bullet journalists like to use. (Oh, and FYI it's mole-eh-SKEEN-eh, not mole-skin. Think Italiano!) Of course the price was very reasonable so instead of making my own, I bought one for when my current notebook is full. And since it's already half-full, I figure I'll be lucky to make it to the end of the year.

There are a number of sizes of Leuchtturm notebooks. Most people choose the medium (A5) size with a hard cover. Being a rebel at heart and very much liking a littler notebook, I got the pocket (A6) size. There is one size (mini) that's even smaller but I think it's not very useful for functional layouts/spreads. Here's a comparison to my original little notebook: 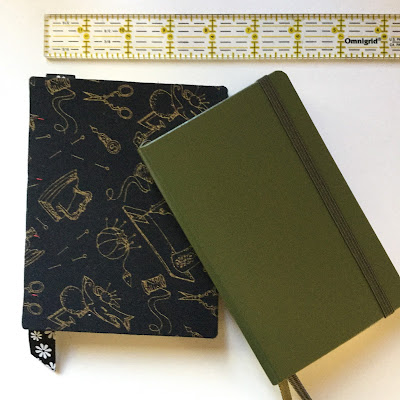 It's a wee bit longer but also narrower. In fact it actually fits in my pencil case! Cool. This colour is Army and it's a nice olive green which coordinately with my pencil case. You can already see that there's an elastic to keep it closed and two different ribbon markers. Inside it has lots of handy features including the first page to put contact info in case it gets lost: 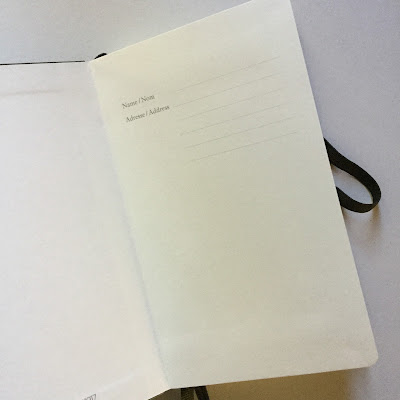 I'd only put my email address and nothing more identifying on that page. Next there's several index pages all ready to fill in: 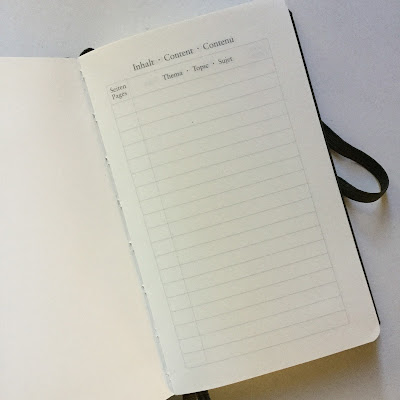 There's a good-sized pocket on the back cover for stray bits of paper: 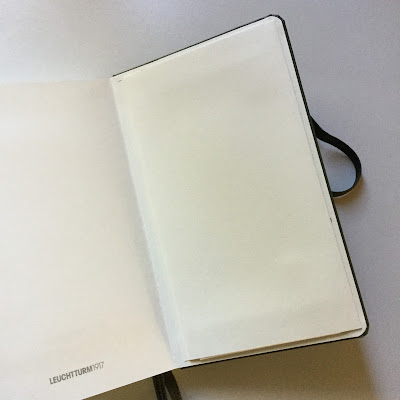 And the regular pages in the middle are numbered with the last 8 pages perforated in case you want to remove them. These notebooks come in lined, squared and dotted so I got the recommended dots: 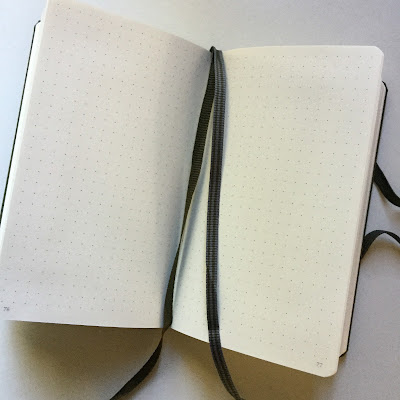 They aren't very dark so they don't interfere with your writing or drawing but they help keep things lined up and spaced neatly. Lastly, in one of his videos Ryder showed a nifty way to hold your pen if you don't have a pen holder: 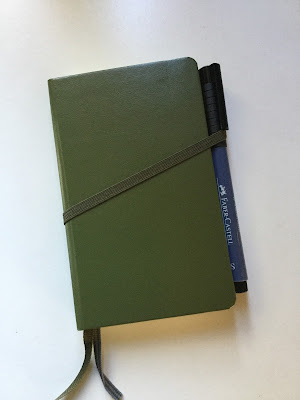 You pull the elastic over and it does the trick as well as still keeping the covers closed. Heh. He also shows you how to pre-treat your new book so it lies flatter and you don't break the spine. Already done. I think I'm all set now for future happy bujo-ing!

Next I have a new FO which I'll tell you about soon. Nice to finally finish something. Sheesh. And there's a couple of textile-related adventures coming up later this week. No moss grows on this woman. Hah.

It's true, isn't it...holiday meals that feature the big 'ol big aren't that difficult to do. Especially if someone {special} brings homemade dessert!

Hope you had a good one. I'm reading about Buju but haven't given it a try. My notebooks of random stuff are....um.....much more random.

Now. Never heard of Welks. Must check it out.

Why don't we – meaning you, Sue, Mel et moi – meet at Welk's and then have coffee or lunch one day? I'm very interested in BuJo and the other systems you mentioned for organizing the stash et al.

I didn't know about the Moleskin pronunciation. Thank you.
And I don't know that Leuchtturn brand, but the name sounds sturdy, so I like it. And if you give it a thumbs-up, that good.
I don't know Welk's but I'd love to visit with the bunch of you.
You could give me a quick Bujo for Dummies tutorial maybe...

Last time I was in Welks the notebooks were noticeably thinning out already! However due to their popularity they aren't hard to find in other places or on Amazon. Chapters/Indigo for instance currently has a sale on that makes them slightly cheaper than Welks.

Lovely idea of a field trip, my dears, but I'm not sure when we could do it since I seem to have a busy schedule coming up for the next week or so. I don't like to overbook myself on social events because I need a recuperation period afterwards! Anyway we can talk about it.