Well, I’ve left you missing the last of our holiday! I kind of ran out of steam the last few days so you might think we’ve been stuck in California still. Heh.

So where were we? Day 25 had us leaving good old Sam Taylor State Park and winding back to the coast. The weather rained some in the night but cleared up to alternating sun, mist and a high fog in some places. Our goal was MacKerricher State Park just north of Fort Bragg on the wiggly windy narrow Highway 1. Everything loose in the back of the van was sliding about but it’s always a fun drive. After arriving and having lunch we walked north on the old haul road up to where it is broken off from winter storms. The beach there is rocky with one of the spots where the harbour seals haul out. We saw semi-palmated plovers that blended right into the rocks when they weren’t moving. 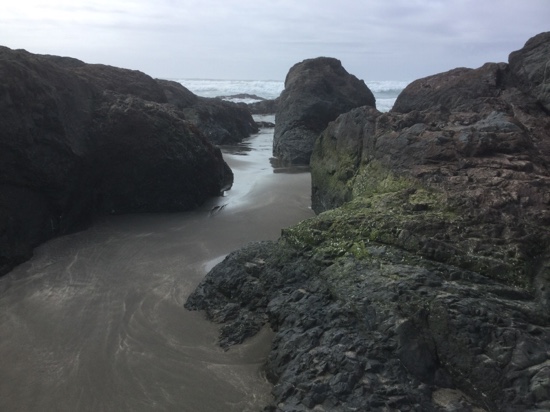 The ice plant (or sea fig, I’m not sure which) grows really well along the beachside here: 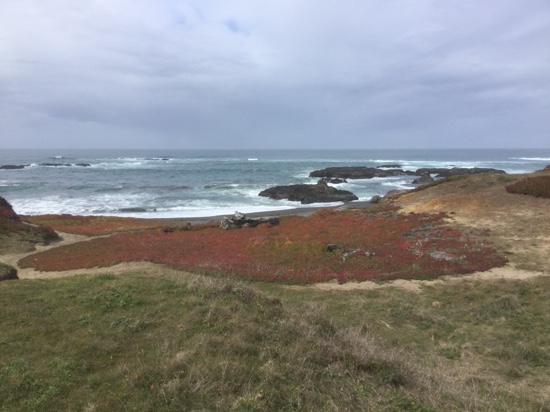 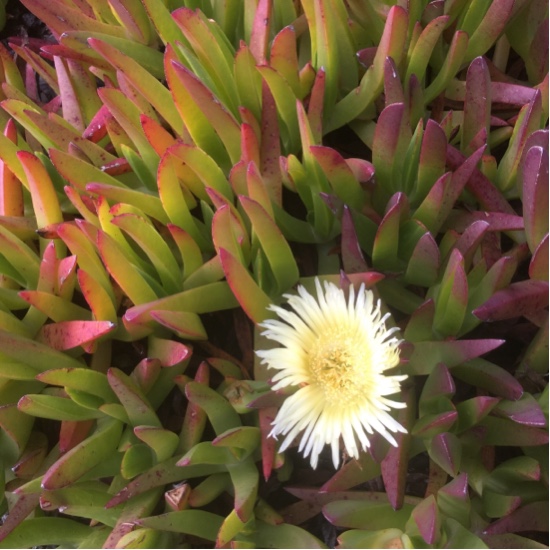 The two similar species can hybridise and both are not native here. They are so pretty though the park has been pulling some of the mats out to slow down the invasion.

We are quite fond of this area so we stayed another day, Day 26. It rained again at night but cleared up by the afternoon. The temperatures were finally getting comfortable! This time we walked on the haul road south. There’s a gap where the storms destroyed it and all that’s left are the metal supports: 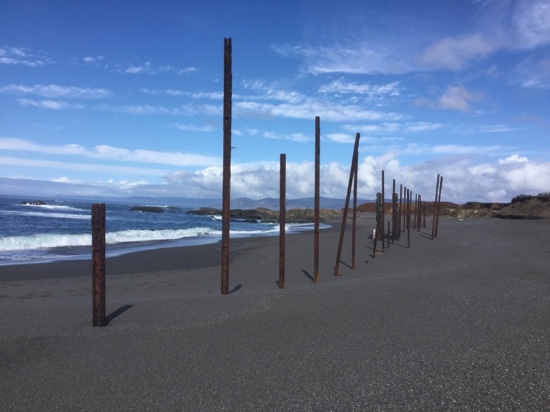 But since this is a popular bike and walking route (you can go all the way into Fort Bragg 2 miles away) there’s a trail around. We stopped out at the lookout to see the seals: 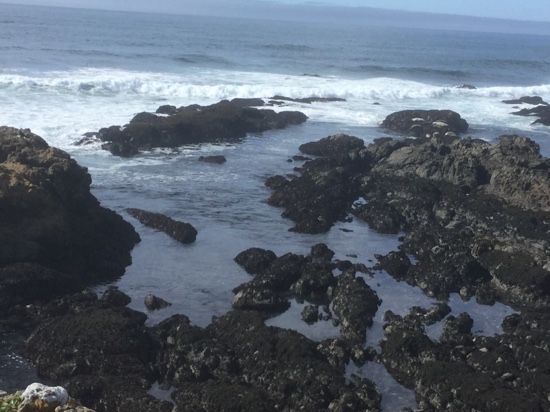 Can you spot them? It was funny watching their reactions as the tide came in with a big wave and splashed them with cold water! We also saw whales quite close in to shore. Humpbacks? They looked darker than the grays anyhow. We walked further down the haul road and went out to the edge of the bluff to watch some more seals and when we turned around the fog had come in and obscured everything. One minute it was clear and the next it wasn’t!

Day 27 we continued north and through the mountains and redwoods to Oregon where we stayed at Harris Beach, near Brookings. The weather was a little rainy on and off but we took our umbrellas down to the beach. This one has some very large rocks: 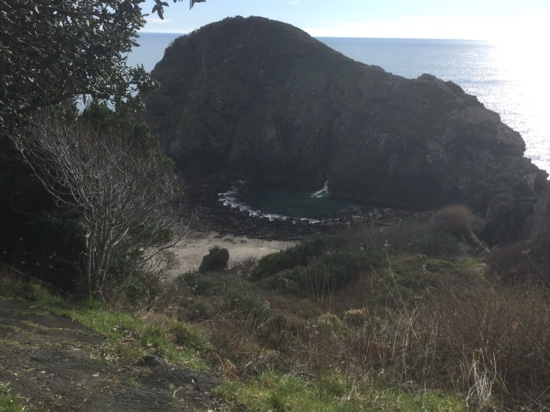 Including the Hole-In-The-Rock. Sorry I wasn’t about to climb down to the beach to get a better shot.

On Day 28 we were surprised by the Daylight Savings time change. Grrr. Just leave it alone, OK? Sorry, I digress. We continued north to South Beach near Newport and walked the trail to the beach and then to the South Jetty: 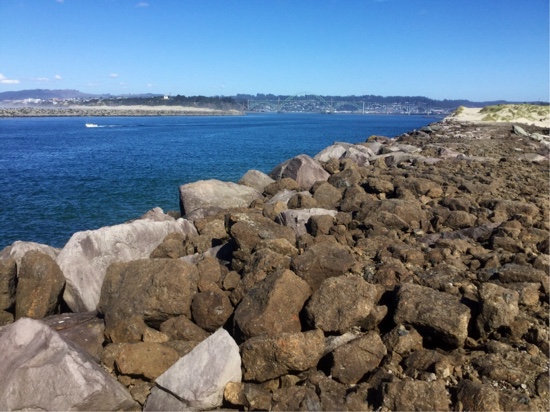 This is the entry to Newport’s harbour and we had fun watching some noisy California sea lions. We drove over that lovely old green bridge on Day 29 as we continued our homeward journey north. This was a shorter jump but it still took awhile since we had to stop in Tillamook for cheese! And an ice-cream cone, of course. Nehalem State Park is one of our favourites. A nice loooonnng beach to walk: 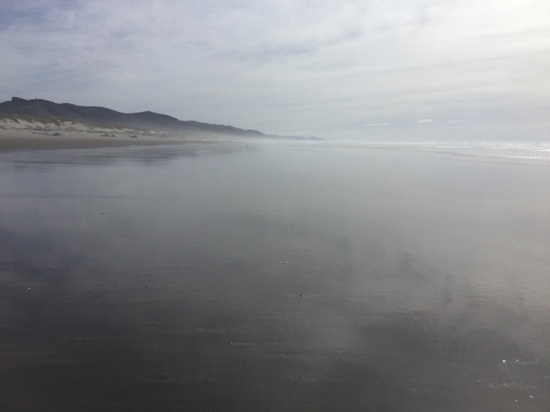 This was definitely the warmest 24 hours of the whole trip! We were in shirt sleeves on the beach and kicking off some of the blankets at night. Who knew that we would find the coast warmer than the desert? Crazy weather.

Of course it was fleeting because on Day 30 it rained all day and all night. Luckily we had bought some new windshield wiper blades in Tillamook before we stopped for cheese. The old originals were toast after being peeled off a frozen windshield back in Red Rock Canyon. Thom was going to leave it until we got home but there was a convenient auto parts store. Good thing too! We continued north over the Astoria Bridge, across Washington and up the west side of the Hood Canal to Dosewallips State Park. There we sat in our toasty van (we had electric power) and read the rest of the day in the rain. This was the first day without any sunshine at all on the whole trip! No photos either.

The last morning, Day 31, found us tootling (in the rain) up to Port Townsend for the ferry over to Whidbey Island. We didn’t even get a chance to wander around the town this time. Got this shot of the bald eagle at the wharf though: 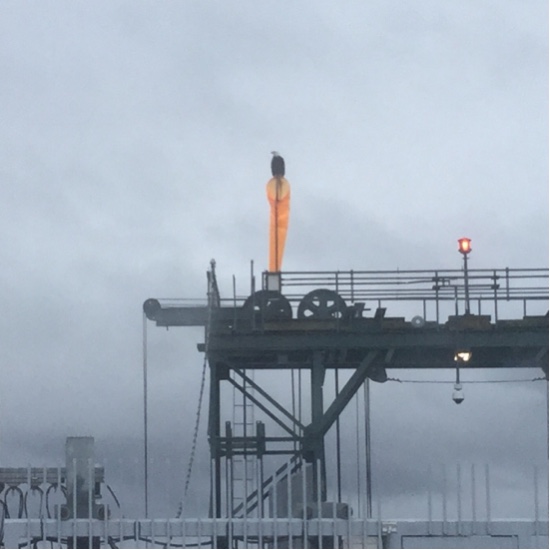 He (or she) sat there for ages while the seagulls yelled and did flybys. Amusing to watch while waiting for the ferry. We caught the Kennewick and landed at Keystone in jig time. The border crossing was relatively quick and painless and we got home in time for lunch. And then the sun came out so we could unpack without getting wet.

So there you have it. Hope you enjoyed the travelogue. We had a really good time, travelled about 7,000 kilometres, walked 285 kilometres and now we’re very happy to be home for awhile. Just in time to start thinking about the garden - although it’s still pretty darn cold.

Back to the usual crafty stuff next!

It's about time!! You missed two snow storms, hail, rain & three days of sunshine. Glad you're back safe, sound & with Tillamook cheese!!