Another pair of socks has jumped off my needles. This time it’s a not-quite-plain sock using my usual Damselfly’s Basic Socks pattern but with a baby cable ribbed cuff and an Eye of Partridge heel stitch. 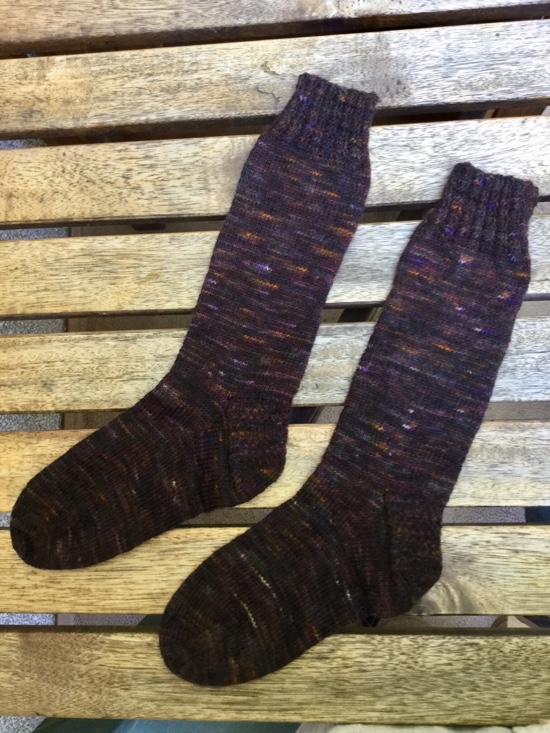 I apologise for the rather dismal quality of the photo - I really should have taken another better one - but I hope you get the idea anyway. The yarn was 2- 50g skeins of the sadly discontinued Phildar Preface that was originally white but I dyed it in an experiment with snow dyeing with acid dyes two winters ago. I thought it was kind of boring but in the end I kind of like the wee splashes of purple and orange and brown on a darker brown base. At least they’re pretty evenly distributed! I made the legs quite long so the cuffs would show above my Blundstone boots. I hate it when all my hard work knitting socks is hidden completely plus the wooly padding is nice to have on my shins. I’ve been reinvigorated with the idea of knitting more complex socks after a long run of plain-plain-plain and these ones are kind of a push in that direction. I already have the yarn and pattern picked out but I’m not ready to start them quite yet.

So I never finished the tales of the last yarn dyeing episode. (Unless you’ve seen my Instagram where I told part of the story.) Backing right up, at least a month or so ago, Thom pruned our purple smoke bush (Cotinus coggygria) and gave me some bark peelings to play with for dye. I soaked it in water with added soda ash to somewhere around pH 10, covered the bucket with a lid and just ignored it completely! When I finally decided it had been hanging about much too long, it was surprisingly not furry with mould but definitely somewhat slimy. And stinky! The pH had gone down to about 5 so I added soda ash water again to get it back up to neutral or just above and simmered it (outside, of course!) for awhile. After I seived out all the plant matter and sludge it didn’t look especially exciting but I dipped a skein of white previously alum-mordanted Cloudborn Highland Fingering wool into it. I didn’t leave it in the pot for more than a moment because I wanted a very light colour and it was turning a tan colour quite quickly! When I pulled it out of the pot the tan colour shifted quickly to yellow and I immediately rinsed it to keep it as light as possible. I’m sure it would have been considerably darker if I had let it simmer longer and left it to dry as usual before rinsing! I think the dye in smoke bush is similar to that in weld where the dyepot itself looks rather unprepossessing but it contains a strong fast colour anyway, especially with a slightly higher pH than usual.

The end result was pretty: 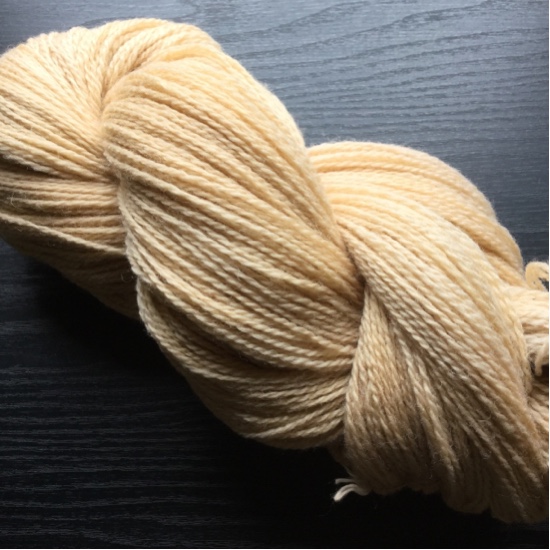 The colour is even and perfect for my intended use (along with a skein of the same yarn in Espresso Heather), the Study Hall shawl from the latest First Fall 2018 issue of Knitty. The only difficulty was I had to wash the skein several times in Orvus and rinse to try to get the foul stink of the well-fermented smoke bush out of it! Now that it’s aired and dry though it doesn’t smell any more. Whew!

But that’s not all I dyed. You’ll remember my pretty lac-dyed sock yarn from the last post. I decided that I wanted the other 5 skeins of that sock yarn (more about the brand later) to be a more muted brownish-purple. Also using lac but with the addition of my old friend cutch to tone it down. I didn’t realise how intense the lac can be however! Even with only 2% lac and 10% cutch it was definitely too bright so I threw in the rest of the stinky smoke bush pot as well. And then I used some iron modifier to tone it down even more. Better but the skeins are somewhat uneven though I suspect that might be my rather slap-dash mordanting. Anyway, those 5 skeins are now a pretty dark lavender: 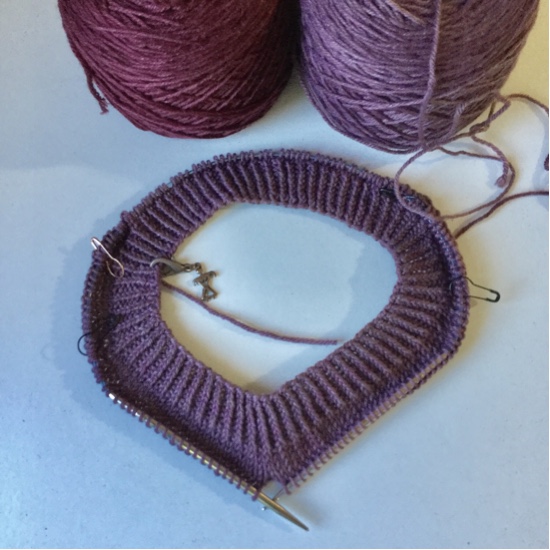 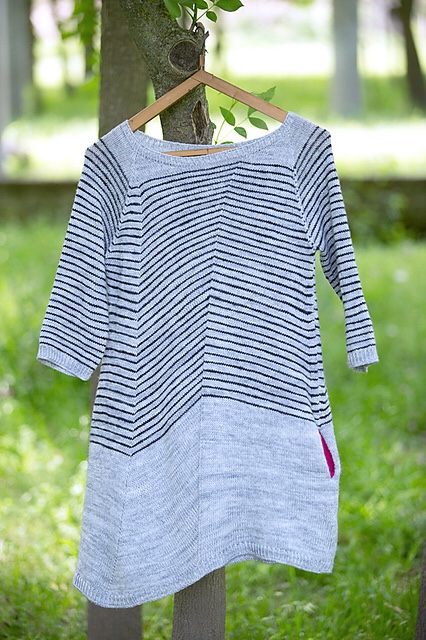 With the single burgundy skein for the stripes and the lavender skeins for the main colour, the yardage called-for is perfect! And of course I love the asymmetrical shape of this tunic. So nice when these things turn out, huh?

Plus there’s 2 more wee skeins of the Highland wool that I dyed in the exhaust pot after the sock yarn had sucked out nearly all the colour and before I added the iron modifier. 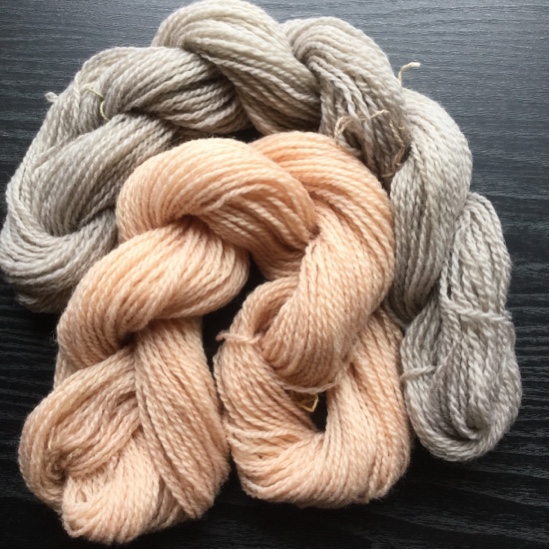 The top skein was pink before it too got an iron modification and now is a lavender grey. The lower skein shows that there wasn’t much lac left in the pot by that point. It’s a pretty light peach. Again they needed lots of washing and rinsing to get out the stink! These last 2 are destined for a yoke sweater project that I’ve been working on. Details to come eventually. I have a full palette now.

So I’d like to talk about the sock yarn I was dyeing in this latest round of dyepots. Cascade Heritage Sock Yarn is a 75% merino superwash/25% nylon put up in 100g skeins with 437yds/400m. Over the last few years the manufacturer has changed where this yarn is produced. I have a skein from 5 years ago that I haven’t yet used and it was labelled made in Peru. The feel is a little different from the recent skeins I purchased that are labelled made in China. The new yarn is slightly softer twist. But the reviews on Ravelry for the Chinese version are very uncomplimentary to say the least. I thought I’d made a big mistake when I ordered 6 skeins of white for dyeing. Perhaps the quality has improved again since the reviews were written because I thought these skeins held up really well to being scoured, rinsed, mordanted, rinsed some more, dyed, washed and finally rinsed at least 4 more times. Plus then I started knitting and made a major mistake so frogged and started again. The skeins haven’t fuzzed, pilled, shredded or anything else from all that. As you might see from the ribbing of my new sweater’s neckline, the twisted stitches are crisp and defined. There’s a pretty sheen too, probably from the nylon content, which doesn’t show in the photo. (No, I’m not getting into a debate on synthetics right now. I’m absolute death on any socks without nylon content. And yeah, I know this project isn’t socks.) Anyway I’m hoping there’s enough left from the Laneway tunic for a pair of socks so I can test them in wear but so far I’m not at all disappointed in this yarn. Believe me, I’ve seen worse and for a lot more than I paid for these from Craftsy, including exchange and postage. I’m always on the hunt for a good-quality sock yarn that comes in a solid dyeable colour: white, natural, light grey, or medium grey. Trust me, not that easy to find! And often, like the Preface I mentioned above, they disappear. Or you can’t get it undyed. And the Heritage already comes in skeins so I don’t have to rewind it.

Anyway, I’m good for yarn right now. Hopefully I can control my urge to buy more? I need to spin some! It’s not like I don’t have fibres waiting for me.

You always have so much fun with dyes!! I thought I would too - I still have some Kool Aid packages & a brand new, 10 year old, Mother McKenzie dye kit!! And a few other things now that I think about it . . . but I'd rather spin & knit. I like bright colors & wild combos!! I should've known better. But I always find your dye experiments interesting. Love your new socks - I'm making shortie socks for myself right now since I have a ton of long winter ones. I really like your new tunic pattern too - can't wait to see it as you progress.

Sharon, you really should try dyeing! With your love of super-bright colours the acid dyes are probably the easiest way to go and they are very easy to use. Though as you might have noticed, sometimes I have to work hard to tone down the brilliance of some of the natural dyes too! LOL!!