We’ve been rather suffering from the June Gloom around here for the last 10 days or thereabouts. So I’m happy to have July show up and hope that things imrove. Not that I mind the lack of stinking heat or anything! I get to wear sweaters. And socks. But I would prefer it didn’t sprinkle rain on me every time I step out the door. Just usually not enough rain to actually water the garden. Which means I have to manually finish the job. Sigh.

Instead of gardening, I’ve amused myself by tossing all my clothes about and assessing them for wearability. It hasn’t been that long since I did my drawers and closet so that wasn’t too big of a deal. But the storage closet in my study where we keep the non-seasonal or rarely worn garments has been mostly avoided for at least a decade! Apart from swapping out items like short-sleeved shirts for long-sleeved ones and vice versa, the back section was holding things that I had difficulty getting rid of. Garments that I wove, made for special occasions or just plain had sentimental value but never wore because of fit, style (honkin’ ‘90’s drop shoulders, anyone?), or hope that one day they will magically find a purpose. I managed to reduce the lot by 4 garbage bags worth of thrifting and recycling, which for me is pretty good odds. And of course unearthed clothes that I can hopefully mend, refashion or use for the fabric content. There’s still one or two items that I just can’t bring myself to part with. Hopefully more about those in a future post.

There were several garments that just needed mending including a pile of Thom’s old Levis with the cuffs shredded. He doesn’t wear out the knees, seat or crotch of his jeans, just the back hems and sometimes the back pocket that he keeps his wallet in. Unfortunately, he doesn’t want highly “visible” mending. I’m disappointed. I need to find a way to patch them more subtly using pieces from one of the most worn out pairs. I have some ideas. But it would have been super fun to use funky bright prints and sashiko stitching, wouldn’t it? Men can be so dull sometimes. :)

The garbage bags included some of Thom’s rejects as well. At least a half-dozen worn-out shirts went in them or into my “good for bias binding or other scraps” pile. I took off all the buttons and now don’t need to buy any shirt buttons for quite some time! Good thing since now he needs me to make more shirts. Luckily he has plenty of short-sleeved ones for the summer which gives me more time to get to it. I did finish his black linen-blend Fairfield Button-up finally: 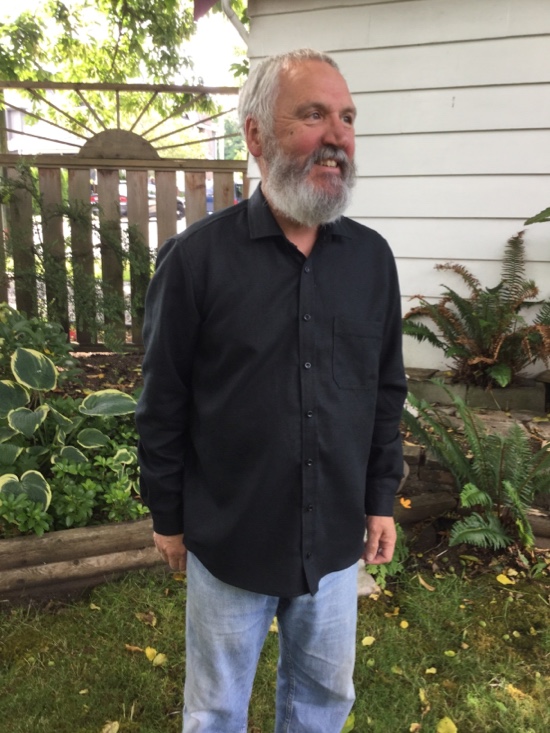 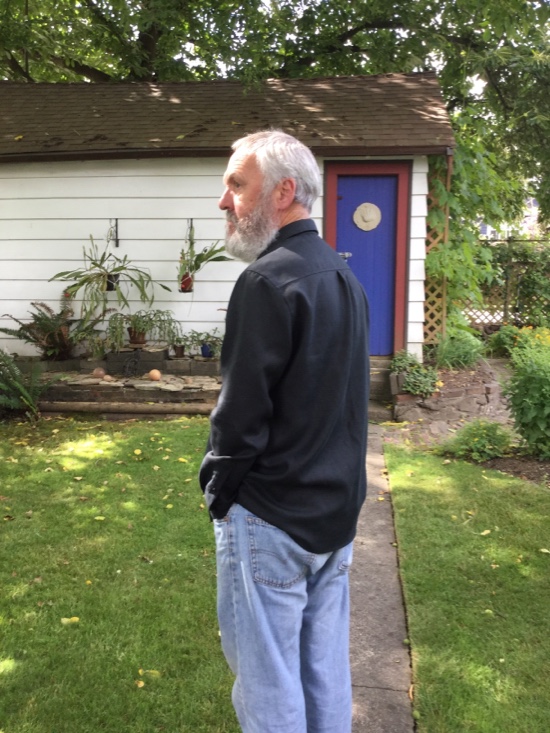 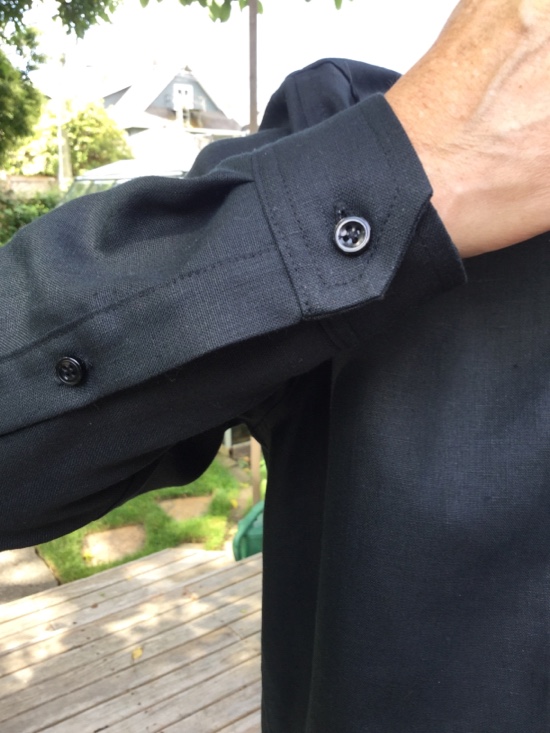 The tweaks that I made to the pattern worked out really well. I lowered the neckline in the front and cut a larger collar and stand to fit it. Now he can button it up to the neck. Not that he ever does! Ties are very very rarely worn. But I wanted him to be able to anyway. I also sized the cuff down to better fit his slim wrists. While I was at it, I used the cuff pattern addendum with the cut-off corners. He likes it! I’ve already added all the tweaks to my original pattern pieces so that becomes the new TNThom Shirt pattern. More to come.

In knitting news I finally got annoyed enough with the Kilimanjaro Shawl and frogged the darn thing. In nearly a year I’d only gotten this much knit: 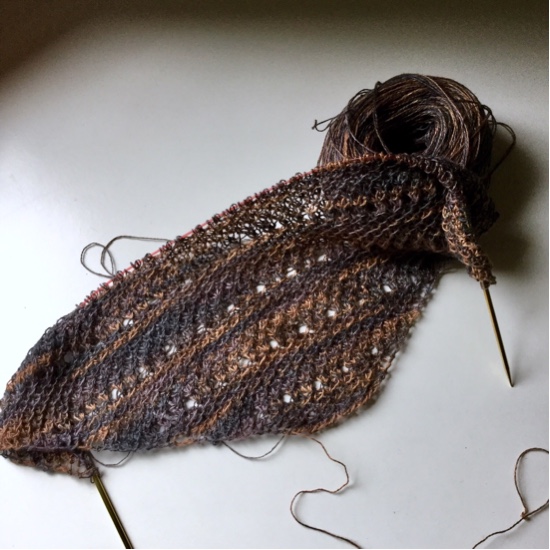 There’s nothing really wrong with the pattern (Good Day Sunshine by Amanda Bjørge, from Knitty, SS12) but it just wasn’t right for this yarn. Too many very fancy Estonian star stitches which got lost in the Prism Hand-Dyed Euroflax lace yarn and just try doing 3/3 star stitches in linen. And we won’t even mention the dreaded 8/8 which I never even got to! I also was afraid the linen didn’t have the necessary stretch to block out into the sunray shape properly. Needs wool. ‘Nuff said.

So I hunted down something that works with variegated yarn and that might look okay in linen. If complex didn’t work, go simple! I fixed on Martina Behm’s Trillian shawl, one of her Hitchhiker series which I already own. I’m really liking the look and especially the knitting! After the set-up there’s only 2 easy rows to alternate before the final edging. Fine linen on 3mm needles is tricksy enough to knit without making it harder on myself. It’s already longer than this: 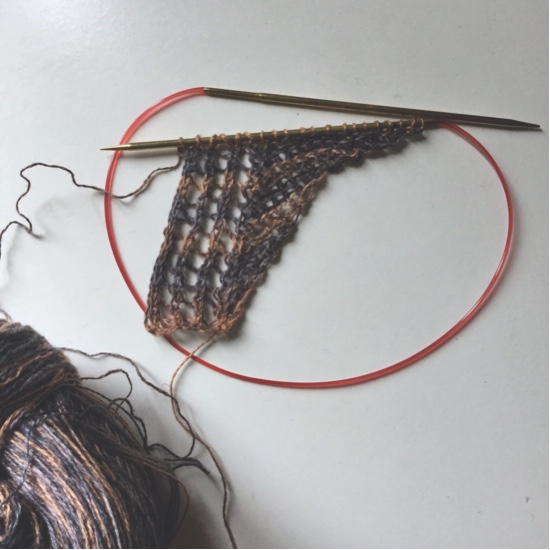 Obviously I’m liking this version much better. Why did it take me so long to frog it and try again? Must be my Scorpio stubbornness, huh?

The Lacca Laneway tunic is coming along too. I’ve just divided for the sleeves and the body after knitting the yoke: 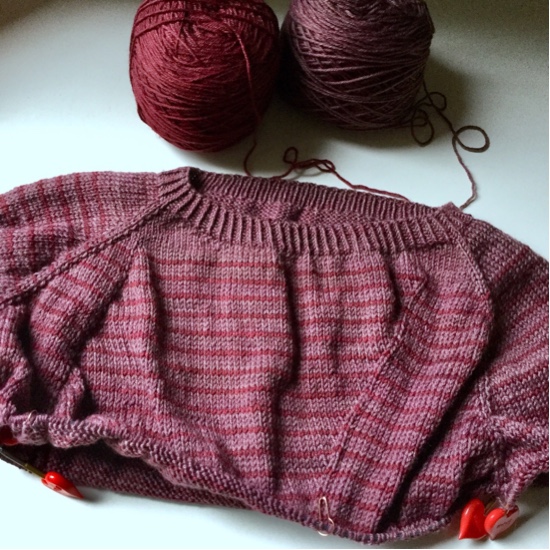 I’m not a huge fan of horizontal stripes but these are subtle enough to please me. I’m hoping the pattern is accurate in the yarn calculations are correct because I sure don’t want to run short of yarn before I get enough length. There ain’t no more! At least knitting from the top down there are easy ways to just stop if necessary: shorter stripe section, shorter body, shorter sleeves. Hopefully though there will be plenty to finish. I’d love to have enough left over to make matching socks. Is that asking too much? I’ve gotten this far and haven’t even used up that first ball of the main colour. There’s 4 more skeins, a total of over 1700 yards left to go. Socks sound promising anyhow.

What else on this now happily sunny Canada Day? I thought I’d start throwing in some random outfit photos for your perusal. This one is my “I’m wearing red for Canada Day but I don’t have anything white to go with it” look. Also I was cold. After this I added socks and switched to my closed-toe Birkenstocks. Heh. 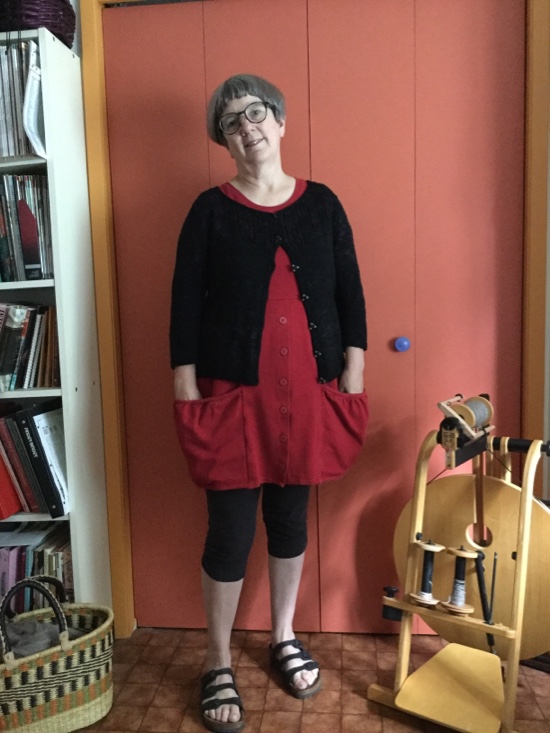 Happy Canada Day to all my Canadian readers, eh?

And a Happy Canada Day long weekend to you!! Love that shirt design you've customized for Thom. Men are so funny about clothes - if you find the exact, right, perfect design, well- you just have to stay with it!! Doesn't this man have giant feet too???? hahaha. Love your stripey sweater. And a RED tunic??? I only have two closets but both need attention - do you hire out by the day???? S.