Trying to carry on here whilst my brains are melting down into my toes. Yikes, it’s been hot! Currently it’s 30C (86F for you non-metric folks). And I think it’s even hotter than that upstairs in the Sweat Shop where I spent a couple of hours arm-wrestling with the Cargo Shorts project that I started a few days ago. The pattern as I’ve mentioned before is from Wardrobe By Me and is very well drafted. The instructions are pretty clear if a little succinct. I would not call it a beginner pattern since there are so many pieces and steps but a confident sewist should be able to manage okay. There are 3 different kinds of pockets (patch, slant and welt), a fly front, belt loops and a faced waist rather than a waistband. Lots of interfacing and topstitching make these shorts look very professional. The only difficulty I’m having is my fabric choice.

I decided to use a piece of my linen canvas that I bought in Victoria last summer. I’ve dyed and overdyed it and it’s thick but quite flexible. However, it’s really really hard to sew through! Even my tough old Pfaff is struggling and I’ve already tried and broken half a dozen needles. Currently a rather slender size 80 jeans needle seems to be working in the sewing machine while a sturdy size 100 universal needle is in the serger (not even a proper EL serger needle because I didn’t have one in that size). Go figure.

I didn’t go for anything exciting for the pocket bags. Just plain old muslin. And I’m using the SF101 fusible woven interfacing that I bought for shirt collars and cuffs. The shorts are coming along but I can only work on them for a couple of hours before I am just done for the day. With my luck the weather will change before I’m finished these things! He’d better wear them after I’ve struggled so much to make them. Just sayin’.

Nothing to see in the knitting department. It’s actually too hot to knit. I think I’m going to rip the colourwork back on the Deciduous sweater and start it again using the more normal stranding technique. It should work fine since the chart I’ve designed has no long floats until the last section where I can use some float catching techniques to make that part work. The issue I’m having with the Coast Salish technique which is used with every stitch is that it just looks too uneven in this fingering yarn and obscures the delicate design image too much. I think it will look better stranded though I may have to use a larger needle or knit it inside out to prevent the yoke from becoming too tight. At least I’ve only got about 2” or so of the chart done so it’s not that big of a sacrifice. I’d rather have it right than continue and not be happy with it. Unfortunately however, I was running in the loose ends of the colour changes as I went so it’s going to be a challenge to rip out! Sometimes I’m too smart for me.

In the garden, I finally decided that the Japanese indigo was mature enough to harvest some to play with. 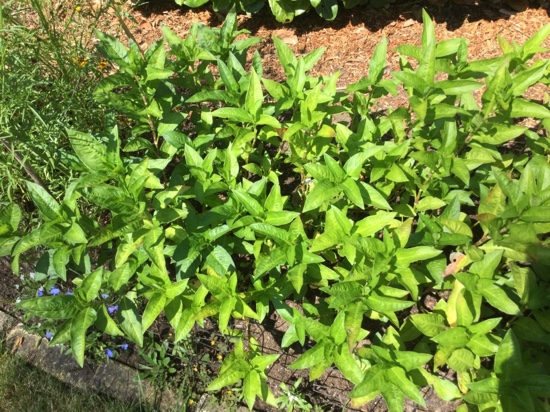 This is only about a quarter of the two patches in my dye garden though I don’t really have that much this year since I gave 1/3 of my babies to the Richmond guild for their new dye garden. I cut the stems above where they are starting to grow new branches and left some of the most mature stems alone. I want them to start to flower so I can get fresh seeds and if I cut them right off they take too long to grow back again to maturity. I still got a whole bucket of leafy stems.

After reading about a different method of extracting the blue from indigo other than composting (called sukumo in Japan) or my usual cooking the leaves a little. This new one I’m trying is a fermentation where you cover the leaves with water and leave them in a warm place for a couple of days to heat up and release the indigo precursors. Then as usual, you raise the pH and beat oxygen into the vat to turn it blue. I usually go straight from there to creating my indigo vat right away but you can also let the indigotin precipitate out, remove the excess water and let the paste dry for later use. It would be nice to save the product from a couple of extractions and combine them so I could actually have a dark blue vat instead of the diluted pale blue I usually get from my home-grown indigo. I could even try a 1-2-3 vat with fructose and chalk. The other advantage is that I don’t have to use it right away but can save it for when I’m more ready to dye blue. I’ve actually gone a couple of years recently just growing indigo for seeds and not using its dyeing potential at all which is rather wasteful. So I hope this works. 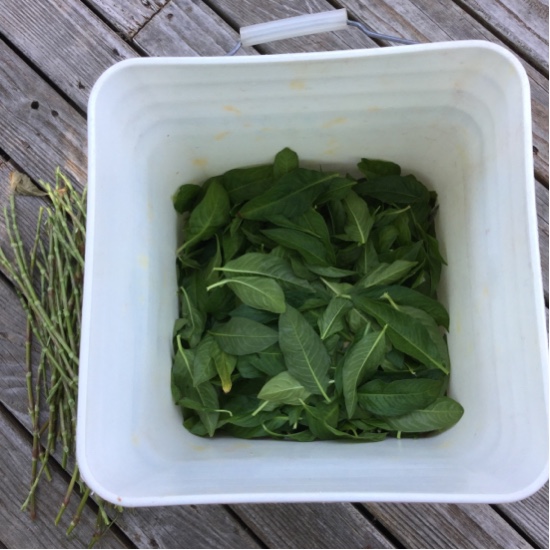 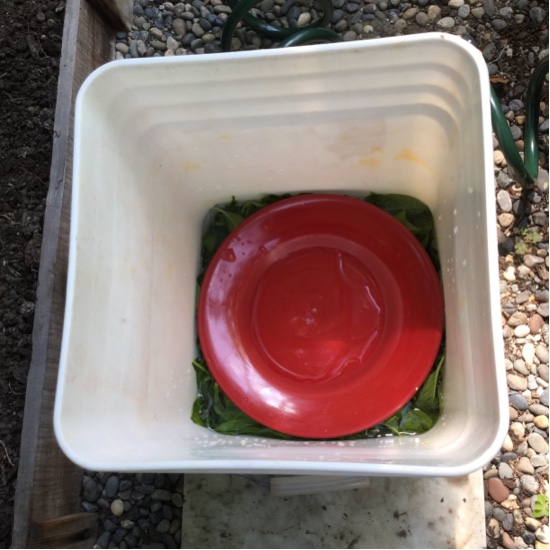 I weighted the leaves down with a couple of heavy plates to keep them under water. Now the bucket with a lid is sitting in my greenhouse where it will keep nice and warm. And hopefully do what it’s supposed to! Crossing metaphorical fingers.

So right while I was in the middle of stripping indigo leaves (I already have a blue fingernail!) I received this lovely item in the post: 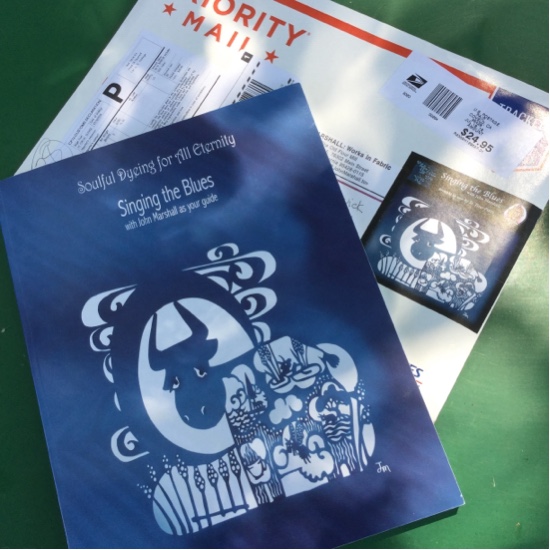 Cost me an absolute fortune thanks to our low Canadian dollar and note the ridiculously expensive postage. Not from Amazon obviously! But I’ve been waiting for quite awhile for this publication from the talented and ever-delightful John Marshall. See, tucked in the back there’s even a real dried indigo leaf, his autograph and a personal note on a kimono-shaped bookmark. 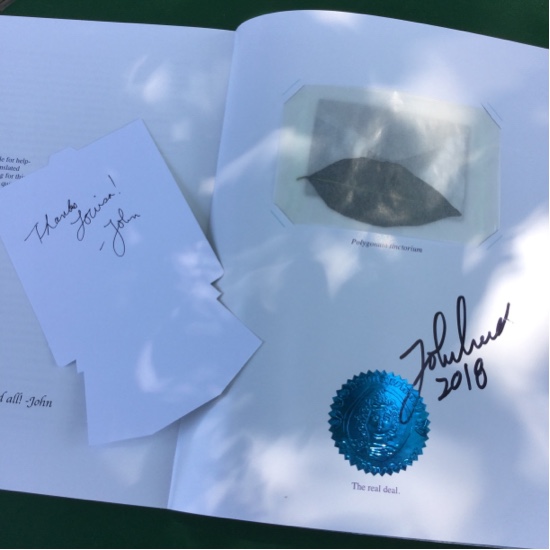 “Singing the Blues” is the perfect handbook for someone who grows their own Japanese indigo and wants to make the most of their harvest. John includes a whole selection of practical tips and methods of extracting and dyeing with this plant. Including the method I’m currently experimenting with! He doesn’t remove the leaves from the stems first. But then he has a lot more volume from his much larger plot. There’s so many exciting techniques in here that I’ve not come across before that now I want a much larger plot too! Oh well. One experiment at a time.

Man, those cargo shorts sound like waaaay too much trouble to me! Once I took my first Stretch & Sew class & learned about fast sewing methods without interfacing, double facings & all the other 'tailoring' needed for structure, I was hooked. I like knits that can be made with flat seams & wide elastic waists. The sleeveless knit top I'm wearing should've had neck & sleeve facings but I was shown how to cut a second short bodice, sew the right sides together & turn it inside out & top stitch - boy was that easy & fast!! And I agree it's too hot to knit! I haven't even worked on my short socks. Too hot in my west facing basement to do much of anything except drink ice water!