The weather has been pretty nice here this week - not quite as hot but still mostly sunny. I think it’s just about perfect except for the constant need to water the garden! That gets old really fast. The good news is that I’m harvesting lots of yummy veggies: zucchini, beans, cabbages, the last of the peas and the first of the cucumbers and tomatoes. My fridge is jam-packed and I’m hard-pressed to keep up with the largesse. I even made zucchini chips in the dehydrator after buying a mandoline to slice them thin. Anything to use the produce up before it becomes compost!

The only veggies we buy at the farmers market this time of year are peppers and root vegetables such as beets, onions, carrots etc. I can’t for the life of me grow them properly. As I’ve mentioned before, I did start some new seedlings for lettuce and Asian greens which are getting big enough to transplant soon. They need to be tough enough not to be eaten right away by the slugs. So I give them a good head start under the grow lights before they get out into the garden. Just works better that way. 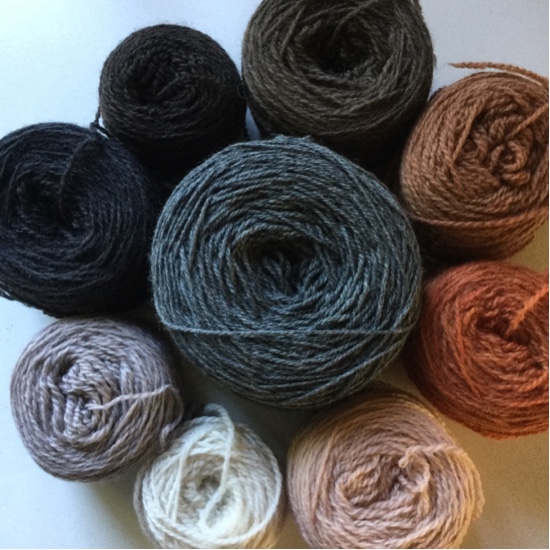 This photo is missing the darker grey Twist (Iron Heather) because I added it after I decided that there probably wasn’t enough of the Near-Black Highland to cover the area I wanted it to. The rest of the palette shows a nice selection of light, medium and dark shades most obvious when the above photo is rendered in grayscale: 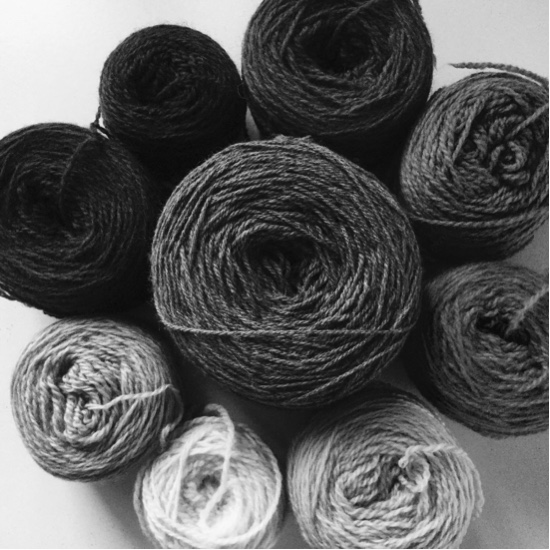 It took several days of playing with charts to get a hopefully workable design almost totally out of my own head. I still use Knit Visualizer which hasn’t been updated since 2008 on my Windows 10 computer. This software is a little clunky compared with modern apps but I paid a lot for it (remember when software cost more than a cup of coffee?) and it still works better than a lot of the alternatives. Although I might think I’ve got the pattern all set, I’ve still been tweaking it a little as I knit. All designers do that, don’t they?

I decided that this sweater, unlike my previous Combers Dress, was going to have a raised back neck similar to the Lacca Laneway Tunic (that I’m still knitting). It’s much more comfortable on my aging body with a neck that slopes forward. I used German Short Rows, fast becoming my favourite method because it’s simple to work and nearly invisible especially right next to the k1/p1 rib used for the neckband. Here’s what I have so far: 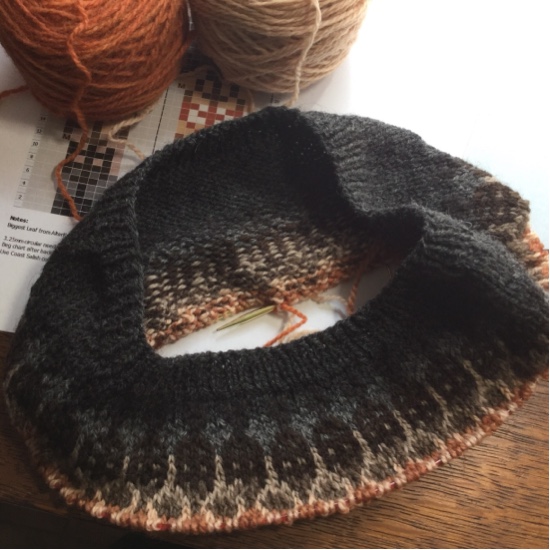 I’m calling it Deciduous because there’s a theme of falling leaves which I hope will be more obvious as I carry on. I’m also using the Coast Salish colourwork technique that I learned last summer and used previously on the Combers sweater. It’s kind of fun, though not as perfectly tensioned as I would like, particularly if you’re used to the more usual two-colour stranded knitting. Some of that evens out in the blocking and some is just the nature of the knitting, a combination of uneven yarns, the interlocking behind the stitches and the necessary make-one increase stitches every few rounds for the curved yoke. Fingering is an awful lot finer than the bulky yarns used for traditional Cowichan sweaters! I’m definitely remembering to keep the motif yarn in my left hand and the background in my right so the motif stays dominant as I discovered the hard way with my last colourwork project.

Of course I probably should have held off awhile on starting this third knitting project. But I couldn’t help myself! I usually like to have no more than two things going at a time, one more portable and mindless and one more complex. I already have the Lacca Laneway down nearly to the waist. I’m still undecided about the pockets but will have to choose whether to include them or not very soon! And the Trillian In Linen shawl is getting quite large. Or at least long. It’s been my TV knitting (while the Lacca is my reading knitting and the Deciduous is my listening-to-podcasts knitting) so it gets a hour or two of love every day. I have to remember to leave myself enough yarn to finish the geometric lace section on the wide end. Coming soon.

While it’s a little cooler I really need to get back into sewing. I have so many things I want to make and the month is just flying by. We have a couple of short trips planned for August but it seems we might be sticking around for September for a change. I’m running out of time for summer sewing so I’d better hop to it or everything will be waiting until next summer! OK then. Off to start on a couple of pieces of mending/refashioning left over from my clothing purge of a few weeks ago. Gotta start somewhere, right?