Well, goodbye August and hello September! And, August, don’t let the door hit you on the way out, eh? Can’t say I’m sorry to see you go with your excessive heat and smoke. Hopefully September will be an improvement. Besides being my favourite month in the whole calendar, it’s usually the time we go on vacation. But not this year. We’re staying home this month. Good thing we had a great vacation back in February and March, huh? Or I might be more inclined to leave than I am right now.

Speaking of the smoke/ground level ozone pollution, it certainly was bad enough, when combined with the high temperatures and no rain to speak of, to do some damage my vegetable garden. The cucumbers, squash and bush and pole beans were particularly susceptible: 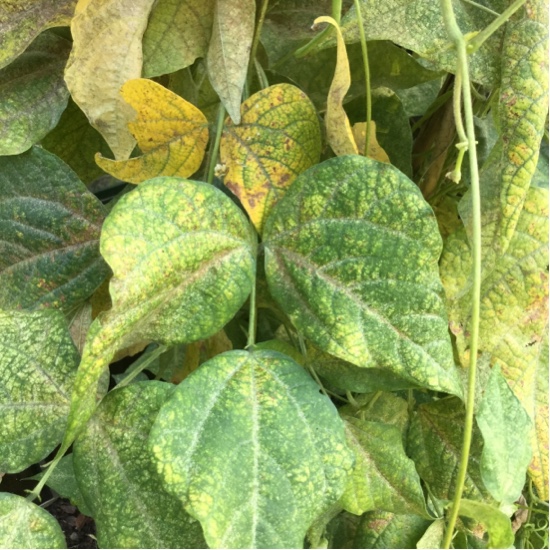 Interestingly, the scarlet runner beans look just fine although they didn’t set much fruit while it was still hot. 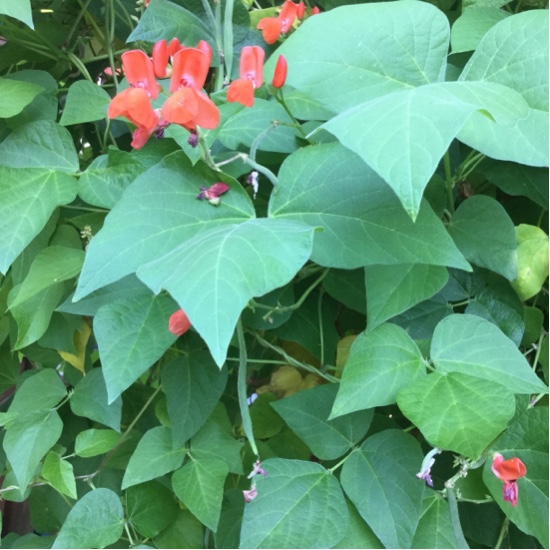 They’re just coming back now that the skies are clear and it’s cooled down. It’s been lovely to get back out into the garden again. There was a lot of work waiting for me now that I’m not so likely to melt into a pile of goo!

That goes for my studio too. My new sewing machine and I have been getting to know each other. The jumping bobbin case issue hasn’t gone away entirely but it has only happened once more since the last time I whined about it. Which leads me to believe that it’s possibly newbie operator error as suggested by the dealer. I hope because I have no desire to drag it back into them only to be told there’s nothing wrong with the machine.

So I made three garments, all out of the same cotton/poly french terry in navy: 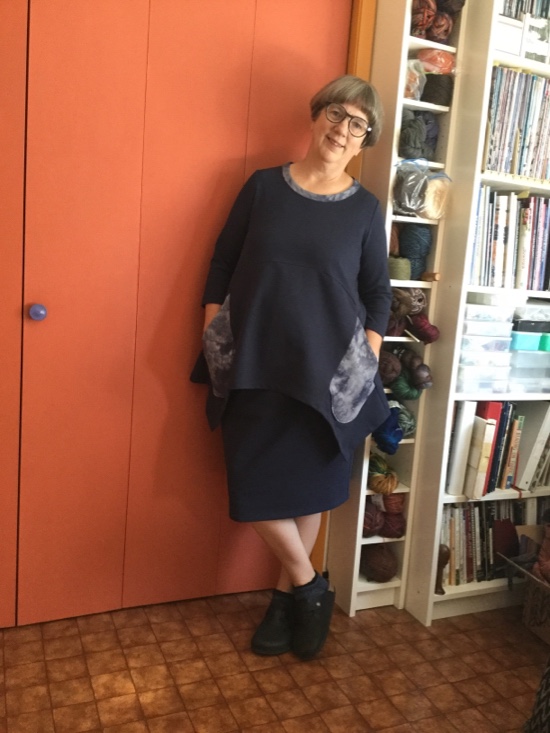 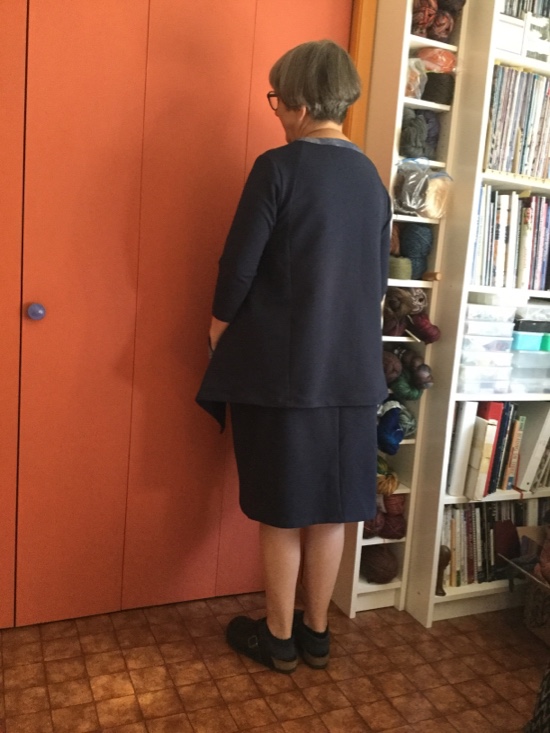 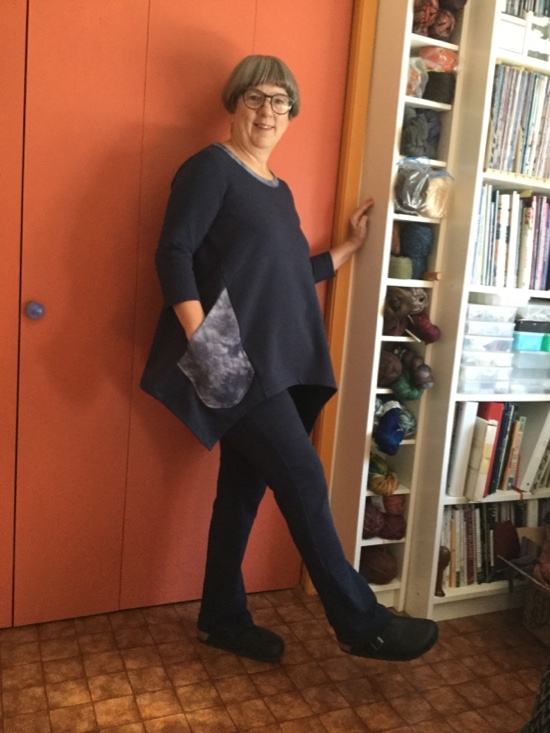 The pockets and neckline on the top (B6492 Katherine Tilton) are scraps from the tie-dye leggings I made last year. The pants are my TNT boot-cut pants long-ago traced from a favourite bought pair. The skirt is a new self-drafted pattern and I think it might need taking in just a little on the sides and the hem pegged a wee bit more. Which repair I need to get around to very soon or it won’t happen.

The top turned out better than I thought it would. I did my usual mods of sloping narrow shoulders and took 1.5” off the sleeve length. I had issues with the fabric being heavier than recommended so the top-stitching I thought I wanted didn’t look good at all and I had to pick it out. Luckily I had only done the curved front seam but it was 2 rows of stitching! Then I had to pick off the first pocket because the pattern markings were incorrect and I put in on backwards. Grrrr... Somehow nobody else has mentioned this issue? The tops of the points on the pocket and the side front piece are opposing instead of matching when they are aligned correctly and the notches do not match. Should not be. Not to mention the raw or exposed serging on the pocket edges. Not. I finished them off though the double-layered pocket, even with the lighter tie-dye knit on the top was still pretty thick and heavy. Could have been one layer instead. Next time, if there is one, I’ll try something different.

Another issue is that the sleeves are quite narrow fitting. They’re fine for me and my skinny arms (and actually matched my personal block quite well) but if you have more “normal” arms you might find them a little restrictive in a not-quite-so-stretchy knit. In the end however, I actually like my top and may even make another sometime. I’ve definitely made notes of where I need to pay attention.

Now I need to figure out what to sew next. I have fabric. I have patterns. And I have a new sewing machine! There’s shirts for Thom who needs them desperately for winter. I see a marathon cutting-out session coming on.

In other news, I finally bit the bullet and tried to rescue my mouldy (and now attracting flies) indigo pot. If you’ll cast your mind back to the end of July, I picked my Japanese indigo and attempted to extract the dye by fermenting it in a bucket to take advantage of the hot weather. That part worked well but the trouble came when I added soda ash to make it alkaline. I didn’t add enough. I needed more than I was used to since the fermentation made the vat very acidic. It didn’t separated out so I could remove the liquid and dry the pigment. It just went weird instead. Not realising what had actually happened I just left it. For a month.

Finally, after reading John Marshall’s book some more, I tried again. I had to filter out the mould. Yuck. And then added lye (a higher pH than soda ash) and thiourea dioxide (thiox) and heated it up on the dye stove to 50C. It actually reduced! Although it was still weird: 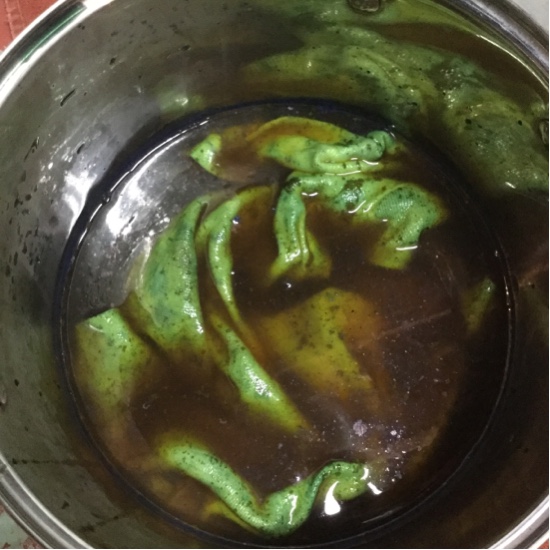 Full of bits (which came out on the vintage t-shirt I threw in) but eventually washed away or disappeared. Perhaps I should have waited a little longer before putting the t-shirt in? Dunno. After 6 dips the t-shirt had quite a nice shade of medium blue: 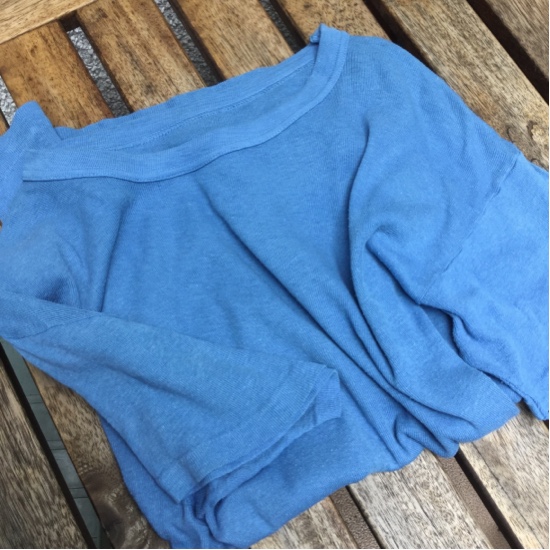 I’m quite pleased. At least I finally used my precious carefully nurtured indigo and it didn’t go to waste. That would be, like, a mortal sin or something, right? I’ve even worn the t-shirt a bunch of times since. I call that success. Next year I want to grow a larger plot of indigo. The fermentation thing worked well until I screwed up. Now I know what I did wrong. If I can keep my indigo pigment (or even sludge) and combine it together enough to make a more intense vat I would be very happy. But that’s for next year.

Your new duds looks wonderful, cosy and super wearable. Thanks for the update on the Tilton pattern. I have that one also and it's good to be forewarned. The sweater is just the prettiest colour of blue. At some point I'd like to talk with you about your new machine. I need one and it would be good to have a heads-up about it.

Wow, you're looking good in your new ensemble. Very classy, yet comfy. The Tilton tunic looks great with both the skirt and pants.

Even with Bouncing Bobbin you seem to have done well with your sewing. The three pieces look very comfortable - all you need is an orange hat, belt, gloves, shoes and/or bag, one more top, a sweater or jacket & you're good for a weekend away!!! It's a nice capsule wardrobe!! Love love love the color of your indigo tee shirt!!! All I can think of is Halloween & cauldrons bubbling away when you start talking about dye pots . . . . .

Double double toil and trouble! Yup, very Halloweenish. I do have all those things in orange, Sharon - except a belt. No belts on this pumpkin body!

Thanks for all the kind comments, my dears! And yes, Barbara, we can dish on sewing machines. Just send me a private email anytime.