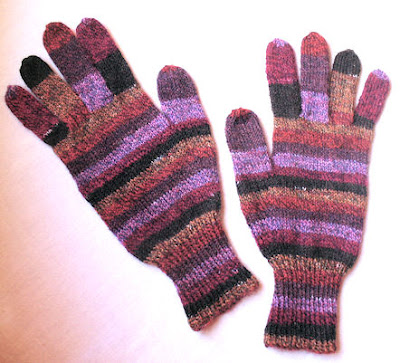 Comments: Since the sisters were fighting over the birthday gloves I made these just like the first pair only with a slightly shorter wrist ribbing and the stripes lined up differently. There was a teeny bit less than half the ball left so I was worried that I wouldn’t have enough. I only had a few metres of yarn left over so it was a good thing I started with less rib. Now to get them to her before it’s too warm to need gloves at all.

Surprise! I also finally have this one for you: 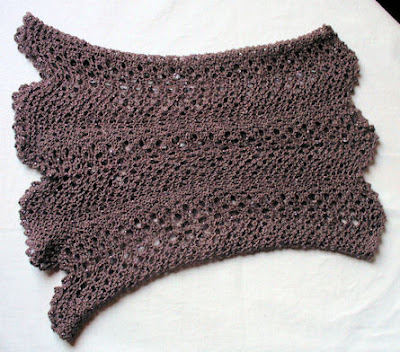 Comments: My handspun yarn isn’t fuzzy like the Kidsilk Haze called for in the pattern but I think my version is quite nice as still very warm. It has a silky look and a bit of a scrunchy feeling from the SeaCell. The logwood colour is very changeable depending on the lighting and background. Sometimes it looks grey, sometimes purple and sometimes brown or taupe. Interesting! I ran out of yarn and had to redo the top part not once but twice and finally reduced the 4 rows of 3/3 ribbing to only 2. I also had to move the beads in the rib down one row to be able to complete it. I had just over a yard left! Did I miscount the yardage or did I somehow take more yarn to knit the pattern? Because I thought I had at least 10 yards more than one ball of Kidsilk Haze. Doesn’t seem to have made much difference in the final outcome though so I don’t mind it being 2 rows shorter. It would have been nice if I didn’t have to knit that end three times in total though. Otherwise I would have finished last week. The picot bind-off is cute but it’s slow to do and uses tonnes o’yarn!

Two FOs in one day is about my limit and caused some necessary counterbalancing startitis. So I cast on for Milady Daughter’s Tulip Socks. I’ve expanded the chart so there is more reverse stockinette between the tulip motifs. Hopefully this will fit her OK especially if I knit the pattern area with 2.25mm needles instead of my usual 2mm. There was no hope of her being able to wear the same size as mine are. They barely fit me and I have skinny ankles. Hers are definitely not-so-skinny and her feet are also considerably larger than mine. “Excellent underpinnings” as we always referred to them.

I also plan to go back to the Hepburn Cardi now that I’m done the Twilight Queen. If you remember I’m nearly up to the underarm decreases on the back and the sleeves are already done. I’d really like to finish this before it’s no longer cold enough to need a sweater. I started it last July so it’s taken much longer than I had planned. Of course I had to frog the original sleeves which were up to the cap shaping because they were considerably off-gauge and start all over again. And then birthday socks, gloves and other things got in the way. It’s not particularly portable either though I’ve gotten the pattern down to where I only need to glance at the chart once in awhile. Until I get to tricky increasing and decreasing anyway. So at least I can watch TV or videos at the same time. I should be trucking right along on it now.

Wow! You knit gloves in seven days? You're my hero!

Your ice queen cowl is lovely.