It’s getting to be light now when I wake up and there’s still a hint of twilight at our (admittedly early) bedtime. It really energises me when the seasons shift like that. I’m not sure I would like to live somewhere nearer the equator where there aren’t any real seasons or where it’s sunny and warm most of the time. I enjoy the changes – though the recent weather is a bit much! The rain has been on and off like a heavenly water tap and the sun peeks through occasionally even though it could be raining at the same time. Yesterday morning was positively dumping but it was lovely and sunny in the afternoon. If you don’t like the current weather, just wait 5 minutes! Very April. Bring an umbrella and sunglasses.

Then I was surprised to notice that April is almost over already and we’re nearly into May! In the last few days I got a lot more seedlings into the veggie garden which is coming along nicely. I’m holding off on planting the warm weather crops quite yet though I can start the squashes and cukes indoors now. Then they’ll have a head start in a couple of weeks and be ready to go in the garden when it warms up a bit more. And I’m still hauling peppers and tomatoes in and out of the greenhouse every day. The bean poles are already in place for the runner beans (thanks to T-Man) and I will need to create my usual “warp” on them for the beans to climb up. Yes, I could use a purchased net but what’s the fun in that? Cotton string is also biodegradable and there’s plenty of it in the weaving stash. Now I’m just waiting on my weld and Chinese woad seeds which Richters have finally mailed. They should be here tomorrow or Wednesday I hope. Got the pots to start them in and space under the lights.

I need to concentrate on the front garden for awhile now that the back and the side are under control. There are lots of “volunteers” (cornflowers, bluebells, yellow poppies and Peruvian lilies among other prolific things) that need to be sorted and cleared out or transplanted to better spots. I have lobelias, sunflowers and marigolds ready to go out there asap as soon as their beds are ready for them. 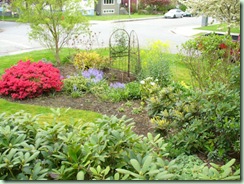 The last-year’s woad that I left in place is blooming now (that bright yellow to the right of the clematis ‘gate’). Quite a colour contrast with the elderly but gorgeously brilliant magenta Hino azalea that we always threaten to eliminate and always remember every April why we don’t. Now that I’ve moved the coreopsis to the new dye garden there is a large space right in the middle there behind the azalea which needs something medium-height, preferably perennial and still interesting in winter. That was the spot where our late lamented pyracantha used to live before it finally succumbed a couple of winters ago. Ah, decisions, decisions.

While I’m showing you the east garden, did I mention that while the grandbeasties were here on Friday we saw Mrs. Hummingbird come by to sample the Oregon grape flowers? We could see her out the living room window and she put on quite a show for us, hovering so we could get a good look! I’m not sure what kind she was, perhaps an Anna’s hummingbird which are quite large as these little guys go. We don’t see them very often in our garden so this was a really special occasion! Glad the kids (and their mom) could share it.

In crafty news, I got Pfaff-y back and she works fine now. Here she is in all her sparkly-stickered glory: 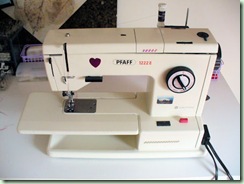 It cost me just over $90 including taxes but there were no issues. I guess that means she’s still pretty healthy for an old lady, right? (Good thing because they don’t make replacement parts for her anymore. You can’t even get new bobbins.) I also stopped by the Pfaff store to see about an adjustable zipper foot. I got one for $8 that the salesgirl insisted would work but it doesn’t quite. The one that came with the machine is fixed to the left of the needle and accommodates the walking foot. The new one can’t use the walking foot (which isn’t a huge issue) but it will only work properly on the right side and not on the left because unless you tighten the screw really tightly the foot skids out of place and it causes the tensions to go off. So perhaps working on the right will be enough to satisfy my needs? At least then I can sew piping into a seam without having the full body of the item stuffed under the arm. And I can sew both sides of a zipper in the same direction (even if I have to change feet in the middle)! If you go down, around the bottom and then up the other side, many fabrics will pucker and skew. Imagine, I’ve been putting up with this limitation for 32 years. Sheesh. Guess it would have been smart to do something about it back then when they were still being manufactured. Doh.

On the knit front, I’m totally annoyed at my Shamrock Cardi’s sleeves which though nearly finished, do NOT match! I’m going to have to rip them back to the underarms and put them on the circular needle together and do the decreases at the same time. Apparently I can’t count well enough to do them properly. It’s something about having to do it on every third row that puts me off. Sigh. I guess I’ll have to pay better attention and use a counter system to keep on track. I’m going to do that now. Right after I start the next load of laundry.

re: carrots
the only thing that protects against the rust fly is Reemay, as soon as you sow. It lets rain and light in but prevents the fly from laying the eggs. put rocks on the side to make sure they can fly in and you will harvest root veggies without the nasty tunnels. Cut a piece large enough to cover, accounting for the foliage as it grows.

Hah! The one time we used Reemay the flies took up residence under it and the cats thought it was a great toy. They shredded it and knocked it down. We no longer have cats, but next door does!