The Bad, The Ugly & The Good

It’s been awhile since I’ve posted, hasn’t it? I’ve been busy and when I’ve had the time available I haven’t been feeling like typing. The weather has been extremely changeable and cool and my garden is getting decimated by baby slugs. My poor beans have been reduced to leafless sticks! It’s very depressing. Kind of makes me lose my momentum, you know?

As I mentioned, T-Man was gone all last week on a training trip to beautiful (not!) Rochester, NY and I got a taste of the single life. On the first day the kitchen sink completely stopped up and I spent a good hour trying to get it unclogged. Fortunately, I was finally successful which made me very proud of myself. I didn’t want to have to call on my kids to come rescue me! Besides, I’m probably better at this type of thing than they are anyhow. I’ve watched T fix lots of things in our nearly 39 years of marriage and hope I’ve picked up a few hints. I do tend to lack real physical strength when that becomes necessary, but often the right tool helps. If I can find it in T’s workshop! Heh. Anyhow, I only needed a plunger and some lye, which is my Unclogger of Last Resort but it worked quickly when all my other efforts failed. Luckily I had some in my dye studio’s rather comprehensive chemistry set (sometimes used for vat dyes).

On Thursday I went out for lunch with T’s mom and we had a grand time! Nana met me at the Canada Line’s King Edward Skytrain station and we took it down to Waterfront Station where we caught the Seabus across Burrard Inlet: 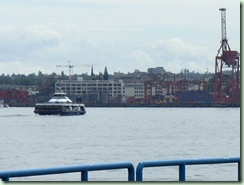 That one is going back the other way. And the happy travellers: 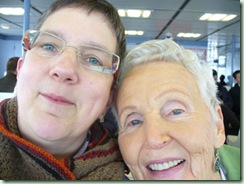 Wacky self-portrait! It’s hard to take photos of yourself with one hand held out.

We had lunch in Lonsdale Quay at the Cheshire Cheese with a view of a pair of bald eagles being chased away by the crows. We took a walk around the market for a look at all the goodies for sale (I bought some Rooibos Surprise tea for both of us at the Blue Teapot and Nana got some bread at Cobs). After I tried on a pair of cheap capri pants which of course didn’t fit me, we strolled along the seawall and a small section of the Trans Canada Trail that has been newly built on the native reserve land. Here’s Nana checking out the trail section’s dedication kiosk: 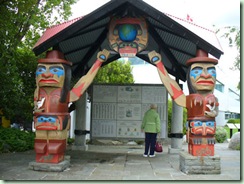 I love the Salish man and woman with their cedar hats holding up the roof. The carving style is a mix of traditional and modern. All in all it was a lovely day and one that we shouldn’t have waited so long to enjoy.

So T-Man happily returned safely on Friday evening and all he wanted was a salad from our garden greens. Apparently the food available on his trip was pretty awful and/or the portions were ridiculously huge. He gained 4 pounds in 5 days! I was as happy to have him back as he was to be home. We have rarely been apart over the years. It’s stressful for both of us.

But then I took off on him on Saturday and went back to the Seymour Art Gallery in Deep Cove to demonstrate spinning while our guild show was still up. There were quite a few of us demonstrating weaving, spinning and basket weaving and we had lots of visitors so it was a fun social day. I almost filled a bobbin with the slightly heavier yarn I’ve been trying for lately, though it’s rather uneven – what I call Demo Yarn. Not sure what I’ll use it for yet but perhaps a new beret, my favourite hat shape. Unfortunately for once the sun was shining outside but we were stuck in a stuffy windowless room for 5 hours! At least we got outside during our lunch break for a little while. I took my camera with me but was so busy that I forgot to take any photos at all. Doh.

Yesterday T and I went for a much-needed walk even though the weather was as iffy as it has been for weeks now. It did spit on us a bit but didn’t really rain until after we got home which fine with us because we were too tired by then to rush out to the garden anyway. It’s amazing how much we carried in two backpacks and a couple of tote bags. We shopped at a lot of different stores for everything from replacement windshield wipers for the VW van and replacement PlayDoh for the grandbeasties to the usual magazines and fruits and veggies. (Yeah, I know I could make some homemade playdough but I didn’t. Next time when they need fresh supplies for sure. Besides we got a cute barbeque set so they can make inedible hotdogs and hamburgers! It’ll be fun.

In crafty news, I’m up to the 10th colour out of 12 on the Multi-Multnomah shawl. It’s not going to be too ginormous even though I’m trying to use up the whole ball of handspun. I’m totally loving the soft colours from my garden. So different from synthetic dyes! It’s a pretty easy knit now that I’ve figured out how to count to six.

I’ve also nearly finished Debbie Double. She has a new sexy black cover that fits pretty well, although it took me two days to get it correctly sewn and hand stitched onto her! I’m currently trying to draw all the important lines (bust, waist, hip, centre and shoulders) on her body with narrow red cord. It’s not easy because apparently what I thought was wonky on Debbie was really because I am the one who is wonky! My right shoulder slopes more than the left and the right hip is wider. Who knew? So I think I need to glue these lines on because it’s just too much work to try stitching it all by hand. I might need new glue first unfortunately because mine all seems to have dried up. I hope to have a final photo when it gets light enough around here to show up the black. If that ever happens.

Pardon my excessive whining coming up here. Don’t think it’s solely the fault of the weather, which has been hard on the migraines and arthritis as well as the garden. But the Evil Psoriasis, which was improving quite a lot there for awhile has now gotten much worse than ever and has travelled over the top of my feet and up my ankles and shins with occasional spots as high as my knees. I’m so fed up with the constant application of goopy ointments and the itching and sensitivity. I’m tired of having greasy socks and stained pant legs. It’s not so much that I’m worried about grossing people out but that it’s uncomfortable and messy to go without some protection on my feet. And with the crappy weather I haven’t even been able to toast a little in the sun which does help some. It’s just no fair! I want to have pretty feet and to wear cute sandals like other people, darn it! Guess that’s too much to ask, huh?

Sometimes I think this trial is just to remind me that life can’t ever be too perfect because the Universe will balance it somehow. Phooey. Meanwhile I have another appointment with Dr. Serious Dermatologist in a week. Though he’s probably tried pretty much everything in his medical arsenal – except light therapy which he is reluctant to start because it’s very time-consuming for me (not him because it’s at a different place entirely). We were both hoping that regular sunshine would be enough. Unhappily, Evil Psoriasis is very sneaky and very persistent. A chronic auto-immune disease, in fact. No wonder I’m feeling depressed about it.

OK, end of whine. Back to working with Debbie. The beasties are coming over later this afternoon and I want to get something done before then. In the meanwhile, here’s a view from the trail over the marina and south across the inlet where you can just see my city: 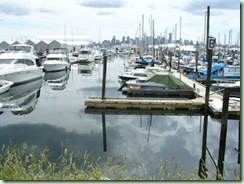 I love that shiny silver light from the thin overcast!

Canadian need to be reminded that we don't have to eat everything when going to US restaurants.

The serving sizes in the US are nuts if you ask me.

We found that out during our trip to Southern Cali in February.

As for Uncle T gaining 4 pounds... Well all I can say is I know how he feels. When I got sick in December I dropped down to 254 which is the lightest I've been in years. But after Southern Cali I've gained about 20. I think finding a job may help me start losing it again. :)

No way could he finish those monster platters! He didn't even try. Just the quality of the food as much as the size of the portions.