I’ve been reading a lot of sewing blogs lately – just trying to get back in the mood now that my sewing space is free from the Quilt That Ate Vancouver Watercolour Quilt. (Which I might add is pretty comfy-cosy to sleep under but is still shedding some lint.) One issue that I’ve noticed is probably the largest for sewers (I hate the term “sewist”) is pattern fitting. Some are getting much better at it and are willing to post their successes and failures to assist others who are learning this difficult art. But I wonder if they take it a little too far sometimes and over-fit? I can’t imagine how comfortable you can be in really tight-fitting garments unless of course they’re made with a knit. For me it’s much more about comfort than style. But then I probably have no style to speak of anyhow. This is the person who wears sweat pants and t-shirts and fleece nearly every day speaking here. However now I want to make at least some modest changes in my wardrobe. We’ll see how far I get, won’t we?

I think it’s fun that so many are into retro-fashions. Though I can’t imagine how they actually use real vintage patterns. Not only is the sizing different from today but garments were made to be worn with truly formidable undergarments! Girdles and long-line seriously boned bras: 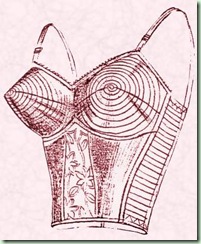 Less restrictive than previous generations but much more than today’s little bra and panties sets. Exercising for body shape was not popular. Also fast food didn’t exist. Regular folks didn’t eat out very often and you cooked your own food from scratch. Body shapes were mostly more in the mid-range: neither as lean nor as fluffy as the two extremes are these days. I would imagine that there are a lot of pattern mods necessary, especially if the pattern isn’t available in your size. No wonder fitting is such a popular topic! Hopefully those killer undergarments will remain in the vault of time though there’s probably some out there who think they are the bees’ knees. LOL! Modern shapewear is truly comfortable in comparison and even it still makes me feel like a sausage. Ewww…

Of course some of my old patterns would probably now be considered vintage. I still have a few from the 1960’s and ‘70’s which of course I can’t fit into nor would I want to wear them. I think I just hang onto them for nostalgia. A few from the ‘80’s and ‘90’s are TNT (tried ’n’ true) though I still have some I will never make. Perhaps I should donate them. They’re not in good enough shape or desirable enough to sell and really I just can’t be bothered. One day I’ll go through the boxes in the attic again and cull some more. Meanwhile, I have a lot of things I want to make so I had better get to it. But first some fitting. But not too much.

Speaking of projects, I’m nearly finished my Ambitus neckwarmer/cowl thingy. It should be done and blocked today. Also yesterday I finally cleaned up the leftover dyestuff from our Spectrum Browns episode last Thursday. The walnut goo was going mouldy again which encouraged me to finish it all up. So to that end, I decided to do a “make-do and mend” on my 40-year-old yellow wool blanket: 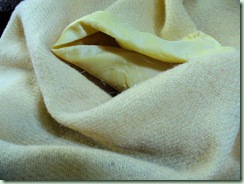 This was a wedding gift from a relative and though it’s thinning it still has some life in it. I used my nifty sharp stitch picker from Lee Valley Tools to remove the tatty satin binding and soaked the blanket in warm water in the washing machine. After gently extracting the water I scrunched it into my stainless steel warming tray: 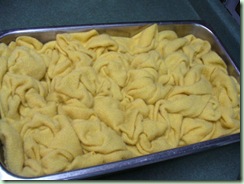 It weighs about a kilo and just fit in the pan. Next I brought the walnut goo (still with the husks in it) up to a simmer and then poured the hot stuff over the blanket using the strainer to catch the husks. Then I brought the leftover cutch up to a boil and poured it over too. Luckily both walnut and cutch are substantive dyes and though they are perhaps more colourfast with a mordant, they don’t actually need one so I didn’t bother. Here it is simmering on the dye stove: 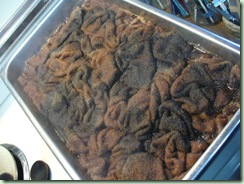 It fits over two of the burners though I have to keep turning it around because one is large and the other small so it gets hotter in one area than the other. Works pretty slick though. Yes, I know it’s kind of an odd colour. T-Man calls it Root Beer so that has become it’s name. I have no idea what exact shades it will be when I rinse it. I left it overnight to cool and absorb so I’ll be dealing with this later this afternoon. Might be lovely and might be yuck! It doesn’t matter anyhow because it will be used on the bed between layers so nobody will see it but me when I make the bed. It also needs some serious binding on all four edges so that might be a good area to apply some brighter colour(s). I haven’t decided what to use for that yet. More anon. Oh, nearly forgot. What did I do with the red sandalwood? Ummm…nothing. It’s still in a pail with a lid on it. Sulking. 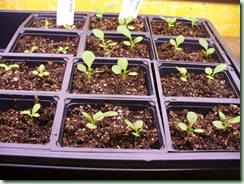 Aren’t they cute? Thanks for the seeds, Nancy in Virginia!

I am going to try japanese indigo this year as well - just waiting for my seeds to arrive. Perhaps a bit late already?

I'm sure you have plenty of time still to plant your seeds. I was a little early (OK a lot early!) off the mark and will be either planting things too soon or waiting too long until the beds are ready. Spring has been slow to arrive for the last few years.