That Was The Week That Was

It got away from me. That’s my excuse for my radio silence and I’m sticking to it. Oh, and there was a lot of family involved there also. I babysat Rosebud at her house on Monday night and slept over on the couch. Then I spent Tuesday morning continuing with the visiting until Milady Daughter had a chance to drive me home. They live in Surrey which is anywhere from three-quarters-of-an-hour to an-hour-and-a-half away – depending on the traffic. Wednesday was Rosebud’s next appointment at the hospital clinic and we learned several exercises for her foot. She has resigned herself very well to her boots and bar system and her parents have a spiffy new clip-on bar on order. It’s sparkly purple! And it will do her until she doesn’t need it any longer. Unfortunately they haven’t gotten a new batch in yet so Rosebud has to wait awhile to switch over.

Then right into Thursday which was my Spectrum Study Group. This time we played with browns: Persian walnut (Juglans regia) husks, cutch crystals and red sandalwood powder. I had the walnut soaking for about 2 weeks and it was a lovely dark mud! The cutch was in large crystals and took about half an hour to dissolve in boiling water with lots of poking and stirring. We poured some cheap akvavit (donated by our Danish Member) over the red sandalwood and it became a lovely red mud but it never released much colour even after simmering for an hour. The walnut (about 3 litres of husks, no idea of the weight) gave us cool browns on the wool and silk yarns but much lighter tans on tencel and cotton. Cutch at 50% WOF gave lovely dark golden-browns on everything and more golden colours in the exhaust bath. The red sandalwood at 100% WOF was a PITA to strain out with cheesecloth and then coffee filters and produced only pale apricot colours. Pretty but not what we were expecting. I know there is lots more colour in it but no idea how to extract it! The literature warns of dulling the colour with too much simmering. Any ideas welcome. I still have the “sludge” in a bucket waiting for inspiration.

Of course I was too busy and tired to remember to take photos. Doh. There were only 5 of us this time and I didn’t have anything to dye myself. I did get a donation of a skein of wool yarn but it still avoided getting itself photographed.

However I do have a Finished Object! Drum roll please… 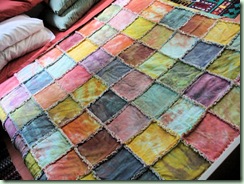 Fabrics:  5 elderly cotton sheets and a couple of curtains, plus 2.5 flannelette sheets that I kept undyed for the “batting”. The rest were “parfait” dyed (technique from Ann Johston’s Colour By Accident) using Procion dyes and soda ash.

Notes & Comments:  I had collected a number of cotton sheets from both my adopted mom and T-Man’s auntie and wanted to make a rag quilt for the bed as an alternative to our usual wool blankets. After dyeing the cloth I spent quite a long time (months!) slowly tearing it all into 8” pieces and making sandwiches of two pieces of plain cotton with a piece of flannelette in between. I needed 195 of these to make a quilt 15 squares X 13 squares with 1/2” seams. That’s 585 individual squares. I counted.

When all the sandwiches were pinned together I spread them randomly across my study floor and arranged them in rows and columns. I needed two folding tables to support the weight as I sewed them together, wrong sides facing, and I still managed to break about 4 needles in the process. There are the places where the seams come together and the machine has to go through 12 layers of fabric! I’m glad my old workhorse can handle the pressure – even if the #90 needles had occasional difficulties keeping up.

Once the quilt was sewn together I clipped the seam allowances so they would fray. I was a bit afraid to do too close together and didn’t clip right to the seam line either. It was still a very big job and took me about a week to finish. I wore seamless quilter’s gloves which helped avoid blisters and used my sharp little Fiskars sewing scissors. 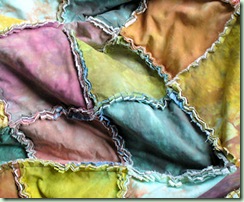 After all the seams including the edges were clipped I washed the quilt on a full cycle in the washing machine. I have a very large old top loader that pretty much handles everything I throw at it and this was no exception. Lots of lint came out and I should have used the drain sieve! Then into the dryer and I had to clean out the lint trap three times to keep it from completely clogging up. The seams are now maybe not quite as frayed as I’d like but I’m sure they will continue to do so in subsequent launderings so I decided to leave it at one time through the washer and dryer. 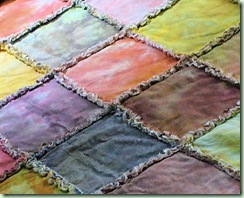 The only thing I might have done differently is make it 14 x 14 squares which would have fit our double bed a little better. It’s still shedding some lint but the seam allowances are quite puffy and full which is what I had in mind. We slept under it last night with the Circus Blanket underneath (and a plain sheet). That’s a lot of weight on top of us because they each weigh about 8 lbs! I found it very cosy but definitely not as warm as all wool. Which is kind of the point for an intermediate season’s bed cover, no?

Beautiful blanket! I wonder if the sandlewood needs longer soaking in alcohol to release the colour. I have never tried it so have no suggestions for straining.

Beautiful quilt! Care to make me one? ;-)

As much fun as the dying sounds, it just isn't something that I feel I need to do... at least not yet.

Louisa, that quilt is gorgeous!! Quilting is something else I've never felt called to try but I do love seeing, and very much appreciate, what others do.

Thanks for all your lovely comments! And no, I'm not making another of these anytime soon - for anybody. It was a *lot* of work. I thought the rag technique would be a shortcut but I think it's nearly as time-consuming as a regular quilt: less stitching, more cutting. The results were pretty satisfying though!

The quilt is luscious, wonderful.
Your dye experiments are always so interesting.