The Zombie Apocalypse Is Upon Us!!

OK, maybe not a full-blown ZA but I’m sure I saw some undead types out there. And superheroes, unicorns, princesses, fairies, lions and tigers and bears…oh, my! I love Halloween, not just for the little ones but I’m even glad more adults are getting into the act of dressing up and embracing their alter egos, both dark and light. Unfortunately it’s starting to become just another marketing opportunity – like that other holiday in December. Don’t wreck it for me, people! Keep it Unreal.

Yesterday T-Man carved a really nice little Jack the Pumpkin King and we’ve got our goodies all ready to hand out. My favourite part of this is eating the roasted pumpkin seeds. They’re half gone already. Yum. We broke down this year and bought a disposable light for Jack at the dollar store instead of a candle, even though T insisted he’s going to miss the smell of burning pumpkin. Heh. I’d rather not start a house fire myself.

In crafty news, I’m totally bummed with my Oatmeal Jacket. I’ve been struggling with the darn thing since the beginning of September! I finally thought I had finished the body and sewed the shoulders together…backwards. Then I tried it on (inside out) and it…doesn’t fit at all on the shoulder and neckline area. It’s much too wide even though it’s on gauge for a medium. Pooh. Now it’s in time-out yet again while I decide whether or not to frog it right back to the armholes and try again or whether to give it up as a total loss. The jury is still out. Now I know why there are only 9 projects on the pattern’s Ravelry page and a number of them have modifications or aren’t finished – including mine. But it looks so cute on the original model! Deceptive little bugger. Grump. Grump.

Progress is also slow on the Dark o’the Moon Gloves. The Knotty Gloves pattern and the knitting of same are working out just fine except that it’s dark yarn on teensy black needles and hard to see without good light. Not evening knitting for sure and also needs too much attention to read while doing it. For me, that slows down the production considerably.

Instead I’ve been knitting with this yarn that I bought for $.97 a ball at Michael’s the other day. (Thanks to darling Sharon’s influence! Hi, Sharon!) Aren’t these just my colours? 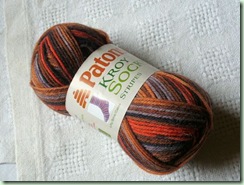 I’m using a ribbed long sock pattern from Drops and so far my Autumn Kneehighs look like this: 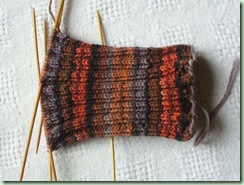 Too bad they aren’t ready for Halloween but I can’t knit that fast! This Patons Kroy Socks Stripes yarn is considerably thicker than usual for sock yarn and the yardage per 50g ball is only 166 so I got 6 balls. And for less than the usual cost of just one ball! Hopefully that will also be enough for some fingerless mitts to match. We’ll see.

Off to work in my studio for awhile today. I need to get brave and finish some pattern drafting for new sewing projects. More anon.

Happy Halloweeeeeeennnnn!!!! Watch out for the zombies, OK? Apparently they want to eat your SKEINS!