Is It November Already?

I learned a new word: backblogged. That’s what happened when I wanted to blog my fabulous holiday but it was sooooo much work to do. It took me a long time to choose the photos (out of 1000) and format them, write up the travelogue, check forgotten facts and post. It had the effect of stopping me from posting other things because I was holding off until I’d completed the trip posts. Now that I’ve finished them, I’m finding it much easier to blog more often. Blog dam broken; flood ensues.

So, we survived the Zombie Apocalypse. We were attacked by a small dragon: 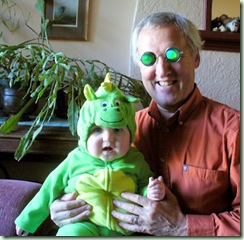 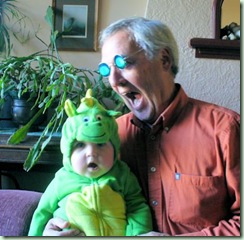 …though who’s eating whom here? Drive-by trick-or-treating granddaughter (and her silly Grampa-Monster). Her parents got the candies and we got to play with the mini-dragon for an hour. Fair trade.

We didn’t get very many trick-or-treaters at the door even though the weather was clear and not too cold. I think a lot of parents are substituting local events and parties for the door-to-door schlep. Too bad because we really enjoy the kids, especially the little ones. Now we have way too much candy left, even though we doubled up on them while passing them out. At least they’re ones we like ourselves! But we’ll have to ration them rationally. Heh.

T-Man and I also spent a good deal of time yesterday afternoon roasting and peeling some of our chestnuts. It was windy all day and the neighbours were doing a good job of picking up the nuts outside our fence so I got the ones inside our yard. Technique: cut an X in the shell (so they won’t explode), put on a cookie sheet and roast at 425F. for 20-30 minutes until skins loosen, cool just until you can handle them without burning your hands, peel while still hot. They were really yummy right out of the oven. All we ended up having for dinner were chestnuts and some cold leftover barbequed pork ribs eaten on the run. Weird, I know. But just about then the knocking at the door started so I didn’t have time to cook anything else. Chestnuts are filling and nutritious anyway. And, if I can beat the neighbours to them, free. We won’t talk about how much work they are to roast and peel! Nope.

Shifting gears here, I want to talk about 2 new magazines just out from Interweave. 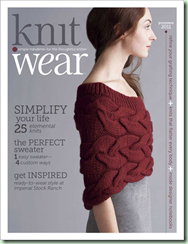 knit.wear is a new publication, one of the thicker and pricier editions. I couldn’t find it in my favourite magazine shop so I used a 25%-off coupon and bought the digital download (PDF) instead. At least the file is on my computer and not in cyberspace like the one magazine I have on Zinio. I prefer personal control over these things instead of trusting that an online service will stick around in case I need a pattern years after the publication date. It’s not like a gossip or fashion magazine that gets stale almost immediately! And PDF is easier to see on my little netbook than the eMags in Adobe Air format which I have to read on my desktop computer because they aren’t formatted for this screen shape. This is exactly the printed magazine right down to the page numbers and advertising. Page spreads are split into singles though which sometimes looks a little odd.

Enough of the technical stuff, let’s get to the content! The esthetic of the cover speaks to what’s inside. There are some very lovely wearable sweaters in this new issue! They are generally restrained and elegant and use a lot of plain stockinette and add texture rather than colourwork for interest. I also like that they’ve expanded some of the construction details with a special focus on grafting seamlessly. Lots of illustrations make the how-to clearer. They have allowed 144 pages so there’s plenty of room. My fingers are itching to knit Pam Allen’s Tern Vest but there’s too many other projects to finish first.

Definitely a keeper – as long as I can continue to access the PDF file format and don’t lose the file! It will be interesting to see if/when they publish another issue. I’m betting soon because this should be a popular magazine with knitters. 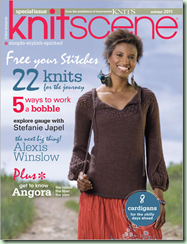 The winter issue of Knitscene is just out too and also a keeper. There’s quite a few sweaters that I’d definitely like to make! I particularly like the cover sweater by Romi Hill and the kimono jacket (Uxbridge) by Kyoko aka Cotton & Cloud. This magazine is supposed to be for the younger edgier knitter but I find many of the styles appeal to me too – definitely not the target market! Now I just need to spin and knit faster so I can make more sweaters.

Speaking of which, T-Man has been getting a lot of use out of his new sweater. He loves it! And says so frequently. That makes me very happy. Totally worth all the work it took to make a man-sized handspun sweater. Unfortunately now he wants another one. I should have learned my lesson after I knit his first pair of socks, shouldn’t I?