Who needs that stinkin’ old holiday that comes near the end of December?! We got presents right now! Lots of them – mostly purchased by ourselves but that’s OK. At least we get exactly what we want, right?

Firstly, I actually got a real birthday present: 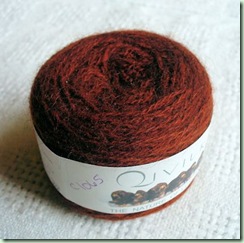 Yes, that is a teeny ball of 100% Qiviuk 2/14 (laceweight). Squee!! From my dear MIL who got it for me when she was on a trip to the Arctic. And it’s such a luminous burnt red embers colour. Love. At only 218 yards it’s going to become a neckwarmer. Probably this one. With beads of course.

And I get to knit my neckwarmer with my new set of Addi Lace Clicks interchangeable needles! More squeeI haven’t really worked with them yet but I think I’m going to like them. For one review go here. Don’t miss her review of the original Addi Turbo Clicks too for a discussion of the connections. (BTW the reviewer is Kyoko whose kimono jacket pattern I admired in the latest Knitcene. Small world, huh?) If that’s not enough of a recommendation then you might try Clara’s post on Knitters Review. Do note that the new Lace Clicks are nickel-coated like the Turbos though, not brass like her review set.

Personally, I like the tips. Nice and pointy but not too sharp. I’m OK with the fact they’re nickel-plated instead of brass. I like the fact you don’t need a tool to connect things and the joins seem pretty secure. I don’t mind the short tips. I’ve got very small hands anyway and the fit within my grasp just fine. I like that the sizes start at 3.5mm, one size smaller than other interchangeables, but I don’t like the fact they skipped sizes between US 10 and 11. In metric sizing there are actually 3 in between 6mm and 8mm! Apparently there are 6.5mm and 7mm tips available separately. I’ll order them if I find I miss those sizes. I don’t especially like the super-long connector. I’d rather have 2 shorter ones instead. And there are no included stoppers. I use stoppers a lot in my Denise set but here those are also a separate item, adorably called Heart Stoppers. The case is elegant but rather larger than it needs to be. The real negative of course is the price, equivalent to nearly 3 sets of Denise or 8 or 9 regular Addi Lace circulars (which BTW I use all the time). But with 8 sets of tips and 5 cords the Clicks give you many more options. Can’t do good work without good tools! That’s my excuse and I’m sticking to it. Now I can ditch a bunch of old stiff needles that I never use unless I’m desperate. I like the tips on my old aluminum Aeros but hate the horrid plastic cables. Anybody want ’em before they hit the thrift store?

More spoilage! I’ve been looking for some in-between boots for awhile. Something higher than my Blunnies but lower than my shiny black pirate boots. Something a little casual and funky and perhaps brown. I finally found some that I like: 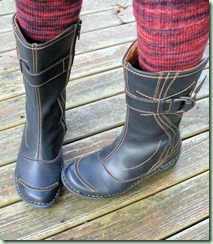 Josef Seibel’s Bergamot boots. Unfortunately they aren’t brown, though with all the gold hand-stitching and golden-tan lining they give that impression in some lights. They’re actually supposed to be black but look more like a super-dark gray in bright daylight. They also are not waterproof which would have been a deal breaker except that they were marked down twice from $199.99 to a final cost of just over $60 including tax! I have a waterproofing product that should help but I just won’t wear them in the rain if I can help it. Though the heel is a little high for me, they’re very comfy. My only quibble is that the top of the zipper stitching chewed up my new tights. The inside flap doesn’t quite reach the top to cover the rough edges there. Definitely something to watch out for. Perhaps that’s why they were on deep discount? I need to take them to my cobbler to see if he has a solution. Or maybe I’ll just take a nail file to the area and see if I can soften it up. Also maybe knit a cuff to cover it. Need to hunt for a appropriate yarn and make up a pattern.

And that’s not all! T-Man and I have been reviewing our current television-watching habits and realised changes need to be made. We usually spend dinnertime eating in bed watching TV on his computer screen. Besides the crumbs in the sheets, this seems rather silly. We have a perfectly comfortable living room. It even includes a nice woodstove which hasn’t gotten used for the last few winters because we weren’t in the room with it. So why were we watching the computer? The truth is we only had an ancient and rather tiny CRT television and (gasp!) old VCR system in the living room so we’ve been using the PC’s Media Center to record shows instead. When you go to bed at 9pm you almost never get to watch them when they’re actually broadcast. And then because they were recorded on the computer we had to watch them there too. In the bedroom. And with only one chair and no room for another, we sat in bed which is naturally comfy (pllows! blankets!) but the computer screen is a little too far away for good viewing. And we ate dinner there too because that’s the only time we get to watch TV. Something had to change to get us out of this rut.

So T decided now is a good time (before he retires next spring) to get a PVR and a new flat-screen HD-TV. Since we have nowhere in the living room to hang it on a wall, we got a 40” Sony LED screen and put it on the table at the back of our handmade couch – right where the old TV set was. It’s big enough that we can see it comfortably from our chairs (a big improvement right there) but it’s not too overwhelming. I think he wants to screw the base down to the wood for security though. (Grandbeasties have a tendency to jump around. Funny how that happens, eh?) Now we just need a course in how to use the darn PVR remote! You need a computer science degree to figure it out. There are too many buttons and none of them are intuitive. I’ve been a competent computer user for 30 years and I’m not stupid but it’s like learning to use a complex program all over again! Who designs these things? Did they test them on real people or just fellow techies? Even T, who helps people with their technical problems for a living, had to call the cable company’s support line for assistance in getting things set up properly. No wonder the store offers to hook things up for you for an extra fee. Most people probably need all the help they can get.

Now I’ve got one DVD I need to review for you. After I’ve watched it on the new screen of course! I’ll give you a hint: there are natural dyes involved.

Do I feel totally spoiled now? Yes, I do!

It sounds like a Happy Birthday was in order! The colour of that qiviuk is gorgeous.