It’s been awhile, huh? Sorry about that. I got a little occupied. There was family, babysitting, a friend’s funeral Celebration of Life, long walks, much gardening and when I looked up for a moment more than a week had gone by. Where the time goes I have No Idea. It just disappears. Poof.

Anyhoo, the garden is looking pretty spiffy after a lot of hard work. Here’s the veggie garden (aka the Back 40) from the farthest end: 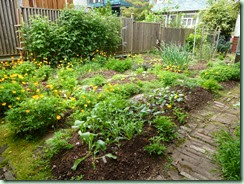 And here it is from the end nearest the house: 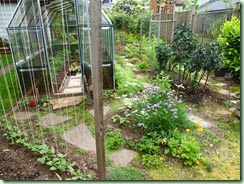 It’s grown some since I took these photos! I left them bigger than usual so you can click to see details if you want. Yes, we have too many Welsh poppies back there. Thom likes them especially and they add some welcome colour. We sadly lost a lot of the creeping thyme between the stepping stones in the pathways this winter but the star creepers (blue and white) came back just fine. I have to beat them back from out of the beds but I don’t really mind. The whole thing is planted now and all that’s left to do for the next while is maintenance and harvesting. Yum! See the pretty lettuces? 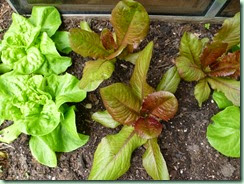 The light green ones are my usual Esmeralda butterheads and the lovely bronze ones are Cimarron romaines. There’s lots of other greens too including arugula, mizuna, red komatsuna, and various Chinese greens. I’m still getting kale buds though production is slowing down. I’ve stopped harvesting the asparagus but I might be able to get one more batch of rhubarb. Don’t want to tax the plants too much or next year will be slim pickings.

The crab and Christmas cactuses and the disocactuses plus the aloes are enjoying their outdoor time on their very own little patio: 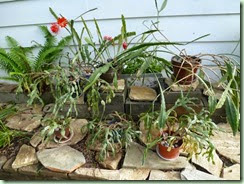 Only one disocactus is blooming currently though I’m hoping the other two will get the idea soon. The big bright red flowers are so lovely! They compensate for the otherwise hideously ugly plants that I nurture all winter in my living room.

The dye garden is growing though the madder has lots of spittlebugs. They don’t really hurt it much but the new leaves get somewhat distorted. It’s not exactly an attractive plant at the best of times anyway. I just want the roots! Ahem. The front garden is nearly done except for some weeding in the west side. We’ve already gotten some nice comments from passersby too. Now Thom wants to remove some fairly major branches from the huge hazelnut tree before it splits down the middle. Hopefully it won’t be a Major Project but you never know until you’re in the middle of it. I’m going to have to help because I don’t think it’s a one-person job. Not particularly looking forward to this.

What else? Oh yeah. I finished the second pair of gloves: 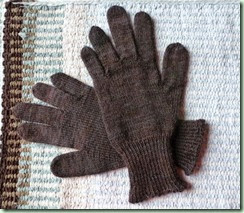 More details on my Ravelry page.This was the pair that displeased me so I overdyed them with Lanaset black. You can still see a hint of the underneath colours but not the really off-kilter gray stripes. I like them much better. I’m totally done with gloves for awhile. Twenty fingers somehow managed to over-stretch even my legendary tolerance for knitting with dpns. Whew. I’ll be good for gloves for a couple of years now, at least until I wear something out.

My next portable and TV project is yet another pair of socks for Thom. This is the Grey Tabby yarn from Ancient Arts Meow collection: 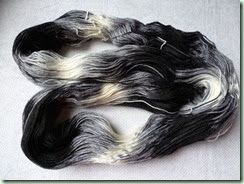 I took this photo before I wound it into balls because it never looks the same after and I wanted to remember it. So far it’s knitting up nicely with interesting flashing and pooling of colours. I know some knitters don’t like that but I do. It’s like automatic ikat. I’ll get a photo as soon as there’s enough to see.

I also received the replacement connector for my spinning wheel from Jane Stafford. Even though I asked Jane for confirmation ahead of time, I got a bit concerned when the instructions said something about not fitting the S90 or the Victoria wheels. However, what it actually meant was that one of the screws supplied was too long so I just used the original one instead. No biggie. I don’t even know why they give you the screws as well since it would be a very rare occurrence to either break or lose one. Not to mention they could be easily replaced from the hardware store. What you really need is the flexible polyurethane cylinder connector. In the end I fixed it myself without Thom’s help. I have a screwdriver and I know how to use it! Plus I kept the glue stick substitute that kept me spinning in the interim. You never know when I might need it again although hopefully this will keep me going for quite awhile. After all the last one lasted me for 22 years, didn’t it?

Speaking of spinning, the Rainbow Dark project is coming along slowly. I had to slow down on the hackling because my thumbs were extra sensitive from too much gardening. I learned the hard way to quit before I hurt myself! After some rest days I’ve been alternating hackling and spinning which seems to be working ok. It actually takes a longer time to create a length of hackled top than it does to spin it up. I’m partway through the fourth bobbin-full and have the first 2 skeins already plied and washed. I noticed that I had spun a little thicker toward the end of the second bobbin-full so I’ve been watching more carefully to keep consistent. I may have to use that thicker bit for the yoke or something where the difference won’t show as much. Obviously I’m a little out of practice! Usually I tend to go thinner rather than thicker if my attention wanders so I don’t know how I went the other way this time. Anyhow, it’s been lovely spinning out on the back deck in the warm spring sunshine. I can watch all the colours glisten as they turn into yarn in my fingers. It pleases me immensely.

More soon! Gotta get out in the garden today before rain happens or something. I still have marigolds, alyssum and lobelias that need a home.

Wow, you are ambitious gardeners! Everything looks so nice. I have a small flower bed and I haven't even touched it this year. Guess I'd better get to it, if this rain ever stops.

your garden looks terrific! Love the greens - I need a tall box to grow mine in now that my knee doesn't quite bend enough to let me get down to ground level. My cacti are screaming to get outside but I haven't got them there yet, sigh. Funny thing about aging, your spend more of the day remembering stuff to do instead of doing it. LOL

Thanks, Dixie! We are definitely overly-ambitious gardeners. But it's fun. I'd rather do that than go to the gym anyhow!

And thanks, Sharon, too! Yes you need a box on legs so you can reach it easier. I know what you mean about thinking about doing but NOT actually doing it. Heh. Hope your cacti get to go out and play very soon.