Ah, here we are again. Firstly good news: we have a dryer! Yay! It's a bit futuristic in that it has one magical dial and a bunch of touch censors. And a sloping top surface. Really, do they not want you to fold things on there? I mean, who doesn't do this? Style trumps function. Boo. I'm hoping my towels don't end up on the floor. Plus I'm not especially thrilled with the flimsy and hard to catch door latch. I'm expecting this will ease as I become familiar with how hard I need to close it. (Clue: a good slam does the trick, though it seems rather excessive.) Ahem. They sure don't make appliances like they used to! A practical test coming up very soon.
Meanwhile I was revamping (yet again) a top that I made awhile back and already fixed once. It's an interesting black ruched texture with Lycra threads gathering a fine woven fabric. Can't remember if it's rayon or polyester at this point. Sleeves and bottom band are cotton/Lycra knit in charcoal gray. It still wasn't working for me. See how the hem sticks out awkwardly? 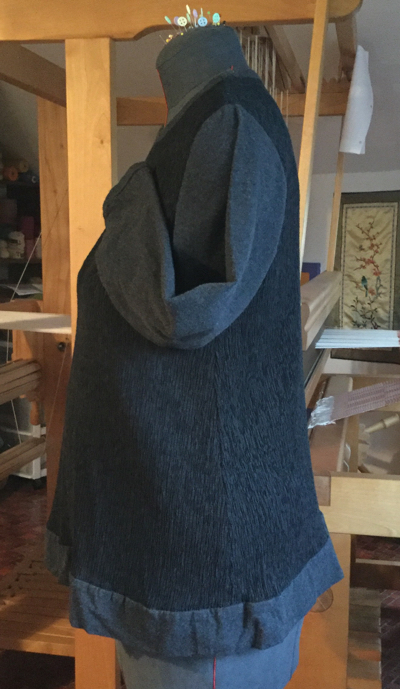 Yuck. So I dug out the rest of the yardage and started chopping and pinning. I ended up with this: 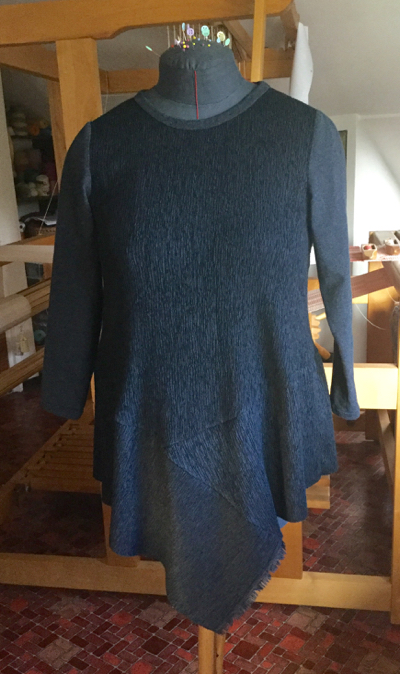 The off-grain areas reflect the light differently but it's the same fabric. I left the cool fringed selvedge on and stitched a piece also onto the back point. 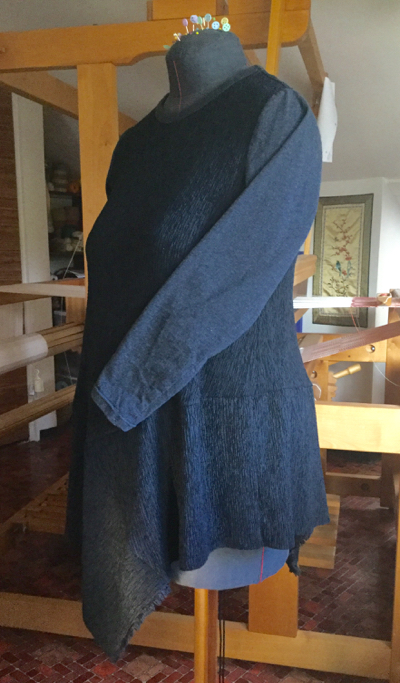 I like it a lot better now. Even if some people have issues with pointy hems. I love them! And I also had enough of this fabric to cut a sleeveless triangle top layer. Of course the points go the opposite way - side to side instead. I can wear it as a nice light top for hot weather with shorts or layer it over this one or the other T-shirt that I made in the same charcoal knit. Nice to have options. I haven't had time to sew that last one though it should only take a short while. I'm going to recycle the hem from the original for the neck and armhole binding. Waste not and all that.
Another mod I did today was to fix the Ribbon Cardi. As I wore it the neckline stretched and tried to slip off my shoulders. So I worked a row of crocheted knit stitches across the back, including the raglan sleeve areas, to snug it up a little bit. I think I'll be much better now.
Plus I finished the Featherstonehaugh: 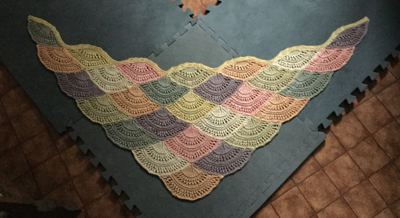 It took two days to dry! And a gabillion pins. I think it's rather pretty. 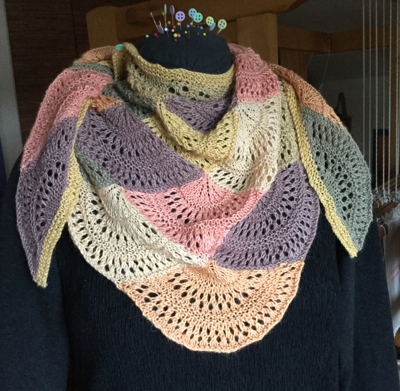 Kind of Easter-eggish springy pastels - very seasonal. If nothing else it goes perfectly with my Stripey Cardi. Hard to believe those are all natural dye colours, isn't it? No "mud"!
So now we're cleaning house and packing for our camping trip south. We're both really looking forward to getting away for a week or so. The weather promises to be reasonable for several days at least. After that we'll take it as it comes. Can't expect more this time of year, can you? We will try to be ready for virtually anything.
I'll leave you with one of our resident Anna's hummingbirds. We currently have at least one nesting in our arborvitae and as many as half a dozen showing up to the two feeders. So cute! 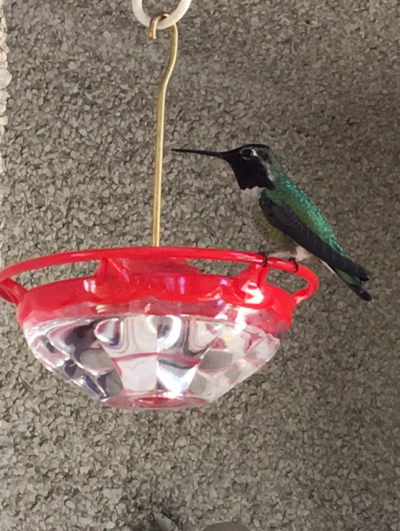 That's one of the males. It's hard to catch their magenta chin feathers. They have to shift them in sunlight to show the iridescent colour! The rest of the time they just look black. They move so fast that it's hard to photograph them at all! Thom took this one with his cellphone.

I love the "mods" made to the top. The pointy hems and the way the light changes the color the crinkled fabric when it changes directions. So interesting. I have a 35 year old Maytag washer and dryer I wish would die. But DH say no need to buy a new washer and dryer until they do.

Thanks so much for your kind comments, Audrey! I hope to get a lot more wear out of that top now.

I really like my new dryer so far (2 loads worth) though I'm not sure how much I'll be using some of the fancy programs. Don't wish your appliances' lives away though! They can do amazing things but they don't last.

You redo redo looks great and is certainly a keeper this time around. Were you influenced by the Tilton class at all? And that shawl is a real beauty. awww. And the humming birds.