I hope you noticed that I’ve refrained from my usual bah-humbugging this year. I’m trying to be all zen about it and let it flow off me. Who am I to tell people to stop being crazy? They have to figure it out for themselves. Quite a number of folks have already lowered the expectations and slowed the manic pace. The advertising is still as relentless as always but somehow it seems easier to resist it. Or ignore it as much as possible. Works for me.

I have a couple of traditions that I really do like to keep though. One is the lower key Solstice Dinner with our family. That one is tomorrow at Milady Daughter’s house. Then there’s the actual Solstice on Thursday (at 8:28 am PST). I have my Guild’s Christmas party in the early afternoon. And then Thom and I plan to walk down that evening to Granville Island for the annual lantern procession. Hopefully the weather will cooperate. It can’t be nearly as bad as last year when we just about killed ourselves on the icy pathways and streets. It’s been much milder this year - at least so far. Rain of course is always a possibility but we’re hoping for reasonable weather.

Then Christmas Day is at Thom’s brother and sister-in-law’s. See how we got out of hosting anything? Slick, huh? This year the family has split up into smaller groups too so it’s not so onerous for anybody. Then one more even smaller gathering and we’re right into the New Year. So relaxed.

Well, I have actually been doing a few things. Like baking shortbread and butter tarts because my family would disown me if I didn’t provide them! We decorated Scheff, my Schefflera arboricola tree and Thom put up some pretty red and blue lights outside. So we’re at least somewhat festive around here. And I dyed my warps and weft yarns for the Stashbuster Blanket: 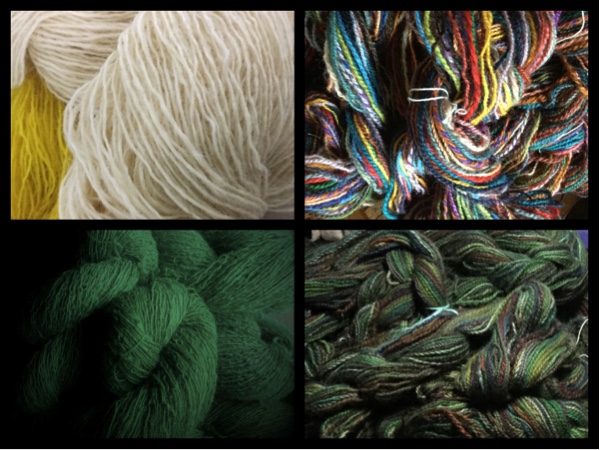 See? The green dye toned down all the colours into harmony. Despite what I said last post, I didn’t have enough of any of the warp yarns to serve as weft so I dug into the singles wool, including some pink and some yellow in order to have enough yardage. They also got dyed in the green. It took 6 dyebaths to get all that wool done, 2 pots on the dye stove at a time. One moment of panic as I was pre-scouring the singles they turned all corkscrewed the minute they hit the water. Yikes! 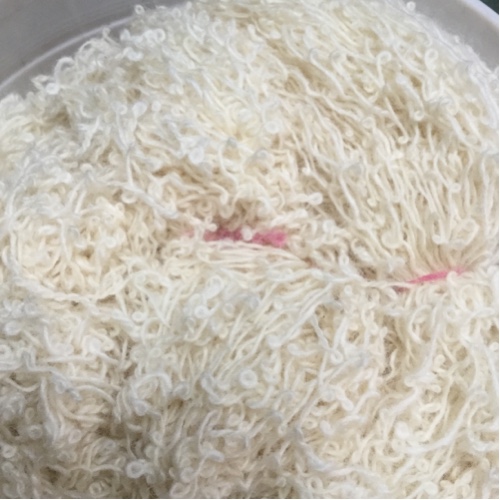 I managed to straighten them a little but they had better behave when I wind them into balls and then onto the pirns ready to weave. The warp sections I left in loose chains to dye and they handled perfectly. No tangling. The dye stock was mixed with ancient synthetic dyes of all sorts but they worked just fine. Perhaps not as strong as fresh dye powders but considering that some of these are probably from as far back as the 1970’s I would say not bad at all! I was going to chuck them out but have been dipping into the box whenever I can in an attempt to use up as much as possible. Just on projects where the outcome isn’t terribly important just in case they are total duds. Totally in the spirit of this project, right?

So next I have to get the warp yarns onto the loom. The structure is plain weave so I’ll just use all 8 shafts and thread a straight 1-8 repeat. Easy-peasy. I hope. It will be just over a yard wide on the loom and I’ll weave enough length to cut it into three pieces to stitch together. I like big blankets that tuck in properly so that’s the best way I’ve found to get the width I want. Done properly you can’t even see where the joins are unless you’re hunting for them. Warping will have to wait until Monday to begin though because it’s family party time tomorrow. Bet I’ll get a request to make my patented lumpy gravy!

Meanwhile I hope you are taking it easy, having fun, eating yummy food, and cherishing family and friends. That’s what it’s all about. The rest is just marketing. Take what you enjoy and leave the rest.