The Dyepot That Never Ends 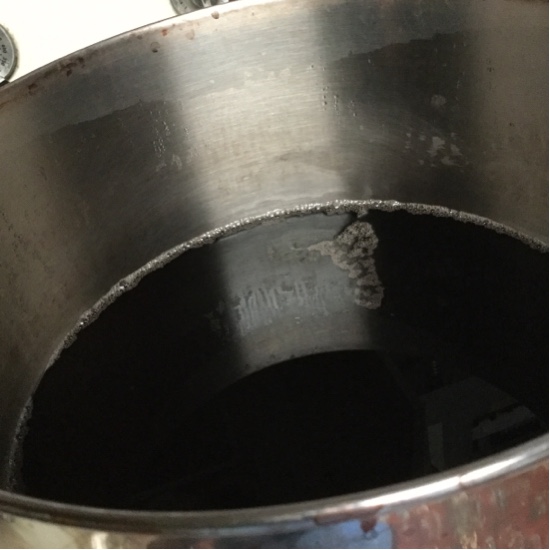 Over the last couple of weeks I’ve been playing with a pot of cutch dye. Cutch is extracted from the heartwood of a leguminous tree Acacia catechu which is grown in India on plantations and is a very useful dyestuff. It contains tannin so is good on cellulose fibres like cotton and linen but also is fine on protein fibres including wool and silk. It doesn’t even need a mordant which makes it very easy to use and has quite good light- and wash-fastness. I’m very fond of the many shades of tans and browns it can produce alone or with modifiers such as soda ash and iron. Since it isn’t something I can grow in my garden and must instead be purchased, at least it’s a reasonably priced dye as these things go. My source is of course Maiwa Supply on Granville Island in Vancouver.

So in a previous post I showed you the first piece of fabric I dyed in this pot, the 4 yards of linen. After that I split just over 1.5 yards off that piece (including the part that had gotten stained) and soaked it in an alkaline soda ash solution for 20 minutes. It took on a more reddish cast but the stains are still evident. 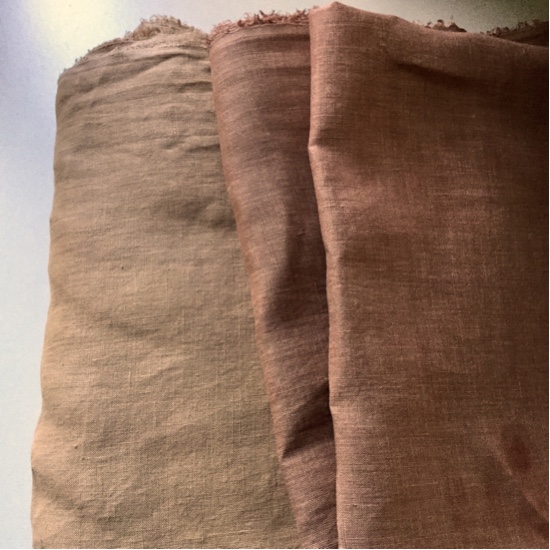 You can see the difference in colour between the alkaline-treated linen (right) and the original fabric. Then I decided to throw in the leftover khadi check cloth and actually heat the bath for the first time. 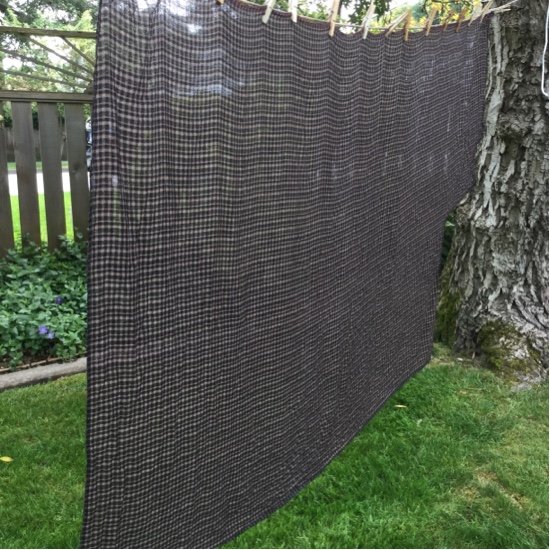 Now that changed the pot’s colour entirely! If I’m correct there was quite a lot of iron mordant still in the khadi and possibly whatever else was used for the black dye affected the cutch. The result was a more grayed brown. And it looked like plenty of dye was left in there so I threw in a small skein of crochet cotton for later use in boro stitching and a very elderly tablecloth that was stained and had holes in it. The needlelace areas are still in pretty good shape though: 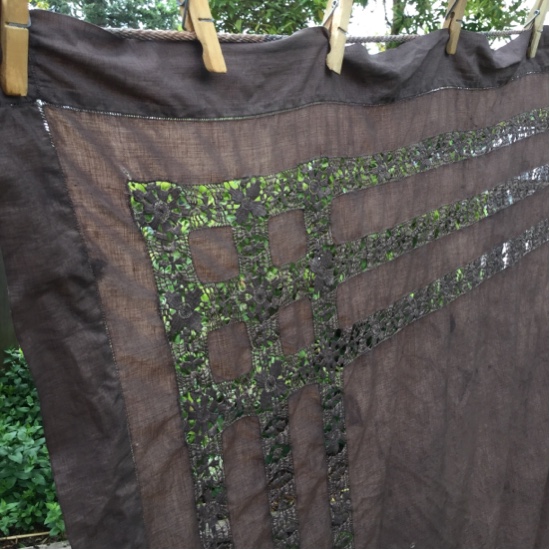 I’ll probably cut this up and use it in another project. Then, because I really liked the purplish brown, I scrounged up 1.5 metres of linen/rayon blend fabric and threw that in after the tablecloth came out. Just to recap (besides the first 4 yards of linen which didn’t get heat) each of these were in the pot individually, heated to barely a simmer over an hour or so, left in the pot to cool at least overnight and hung without rinsing to oxidise for another day or two. Only after all that did they get rinsed and dried again. Let me tell you, that rigged-up clothesline got a lot of use!

So here’s the final tally all washed and pressed and prettied up: 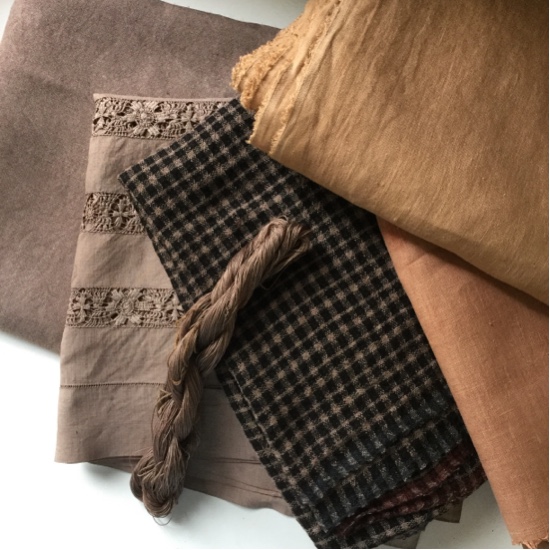 They are in order of dyeing from right to left. The total weight of dye to fibre was 250g of powdered cutch to a grand total of nearly 1600g of fabrics. They all are so pretty it’s going to be hard to cut them up! There’s still colour in it but now I am going to go Dump The Pot. Quick before I’m tempted to go hunt the stash some more. I’m done.

Guess the dyepot did finally have an end, eh?

The colors you created are just gorgeous, Louisa.