OK, so I succumbed to the top I mentioned in the Spring/Summer 2006 Vogue Knitting. Better finish quick since this isn’t what I’m supposed to be working on right now! The pattern looks like this: 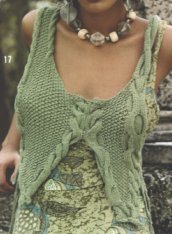 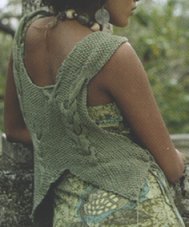 Wild huh? Notice that I flopped the picture of the back to the right way around? It was backwards in the magazine. I also checked out the errata on the Vogue Knitting website. There was quite a bunch for this pattern already, though I found most of them myself already. Just problems with the descriptions/symbols for the wacky cables. The charts are ok so far. One important one they missed is the fact that the right and left points of the back were mislabeled and you’re supposed to start on the right point. Guess the flopped photo confused them? I left a message telling them about it but it hasn’t shown up on the errata page. I don’t think it really matters which point you start with as long as you get them oriented on your needles correctly when you go to join them together.

I actually scanned and printed out the two charts because you need to follow them very carefully if you want the same thing as in the picture. Otherwise I guess you could make it up as you went along — which would definitely be a whole lot easier! As it is, I’m being anal and doing it as the chart says. I carefully annotated the charts with every row indicated, all the edge stitches of the moss stitch marked whether it’s a purl (with a dot), and counted and wrote the exact number of stitches for each part of the cables and whether or not they are held in front or in back. This has been really helpful and so far I’m right on track. See?

Note that I used stitch markers to divide the cable areas from the moss stitch. Those are my elegant handmade markers and they’re made with sterling silver headpins, jasper stone beads and tiny sterling flower spacers. (No ugly plastic markers for this knitter!) They’re a wee bit small for my size 4.5mm Denise needles though because I made them for my smaller sock needles which makes them a bit tricky when transferring from one needle tip to the other. But they really help in knowing exactly where I am. Have I mentioned that I loves my Denise needles? I know they’re not beautiful but I really like the heavier but soft cord and the moveable tips. When I needed to hold the first back point while I knitted the second one, I just switched the tips for stoppers on the right point, put the tips on a different cable to knit the left point, and moved the tips as I knit the two pieces together. It worked beautifully and saved me from transferring stitches and fiddling with holders or thread.

Oh yeah, you want to know what yarn I used. It was some that I bought a very long time ago (at least 20 years?!) for a cabled sweater I never finished because A) I ran out of yarn and couldn’t get more and B) it was tooooo heavy to be wearable. This stuff is 50% slub cotton and 5o% linen and made by Dilthey Wolle, a German company that spun mostly cotton and some linen (don’t ask me why they were called “wool”) since the 1800’s. They are still in business but apparently they only make cords now, not knitting yarns. I learned this from a website that was translated from German and, of course, not translated very well. One good thing is that I have LOTS of this yarn for something this small. I haven’t even unraveled the back and most of a front that I’ve already knitted and I have 7 balls still with the ball band on. There’s at least that much still in the knitting so I could make something else relatively small if I want. The colour is a dark grey with the cotton a slightly lighter shade than the linen. It consists of 4 2-ply strands, each strand having one ply of slubby cotton and one ply of smooth linen. 50 grams = 80 metres. Sometimes fibres just need time to figure out what they’re ultimately going to become, right?

This pattern is knitted from the back points through the shoulders to the front points. Sometimes you’re working on one side and then the other and sometimes you’re working across the whole width. The sides are laced together to fit the body. This is a great place for me to use kumihimo! Obviously you’re not going to wear it without something else underneath. At least I wouldn’t! And even the lovely model is wearing a dress or something under. There isn’t one row on this thing that is the same so you really have to pay attention, move the magnet on the chart carefully (I’m using a large Lo-Ran magnet board), and count a lot. Mindful Knitting for sure.

Awesome Vest! Love that - may just have to get that magazine. Did my first blog in 10days. It's been busy here and I'm way behind in reading yours. This gardening season does spread us thinner....our time that is, you're thin already :)