We broke records with the heat yesterday and it’s even hotter today. We’re not used to such extreme heat in the Vancouver Lower Mainland! There’s poor air quality advisories out for the valley but the wind is blowing enough here in town to keep the air fresh, if much too warm. No, I’m not complaining. They say it probably will cool a bit tomorrow. But the high pressure is supposed to stick around for close to 2 weeks. Yay! Summer at last! Watering all the plants is getting to be a bit of a pain however. But I’m still not complaining. Nope, I’m sitting here with the fan blowing on me and wearing shorts and a sleeveless tee. And yes, I still drink my extremely weak tea hot, even in the heat.

In crafty news, I’ve turned the heels on the Africa Socks which are turning out rather nice actually. T-Man likes them which is all that really matters since they’ll be on his feet, not mine. I’ve been plugging away at Mu Ni's beading and she only has about half an arm and a bit of her back left to do. I plan to go sit out in the shade on the deck shortly and work on her before I have to start dinner. Today I hauled out a bunch of fabrics that have been variously dyed and monoprinted in an attempt to get inspired to make a tablecloth for my ugly bistro table. I plan to even bead weights for the corners to prevent it from blowing off. However it got too hot in my studio and my brain seized up so I’ll wait until tomorrow morning to work when it’s cooler. Nothing like trying to iron when it’s about 35 Celsius. Ick.

I got a copy of the 3rd issue of A Needle Pulling Thread magazine the other day. This is a Canadian magazine, mostly embroidery which I don’t do, but there’s quite a few other crafts included. This issue has an article from my friend Ania and includes her story and instructions for a necklace. As well as wonderful beadwork/bead stringing, Ania makes lovely lampwork glass beads — she was the one who got T-Man hooked on it! Also in this issue is a really nice modular knit sweater-vest, a hooked sunflower pillow, an elegant jacket where the fabric has been shibori dyed in natural dyes, a mermaid doll pin and lots more. I’m still reading and enjoying it. This magazine is very well done and the articles are more in-depth about the designer than is usual for a craft magazine. I think this is the best issue so far and the editor is finding her voice very well in focusing on Canadian crafts and craft people.

You might like to know that Darth Dragonfly is now installed in the grass on the boulevard near the corner of our property. He’s already garnered much interest from passersby and the real dragonflies have flitted over a few times. This isn’t a great pic but it’s the best I can do. I’m too short to get the higher perspective. Our house is behind the shrubbery. Notice that Darth is aiming directly at the house! 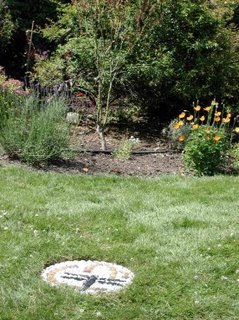 We also finally got the kitchen sink epoxied yesterday but we can't use it for another week. I'm getting a little tired of doing the dishes in the bathroom but I'll survive. It's kind of like when you're camping actually except that you can't splash as much! While T-Man was painting the sink 4 separate coats, I was painting the inside of the back door. So once the sink is properly set, we'll be done the kitchen renovations that we started last summer. Well, except for the window I'd like to replace, but that could take another couple of years before we get around to it. Good things take time. That's why we've been here so long!