That’s what the weather has been for sure. Yesterday was so sunny and warm (after the frost melted!) that it was shirtsleeves for everyone. Today we’re back to cloudy with a threat of rain and somewhat cooler but there was no frost. I’m dizzy. Though that just might be the migraine probably brought on by the barometer’s speed fluctuations. BTW yesterday’s frost was a record cold temperature for that date.

I spent yesterday afternoon taking the grandkids to the park to play. We had a great time! It’s so much fun to get down to little kid level and play pretend. Later when their parents returned from a much-needed movie date and T-Man got home from work, we all went to our favourite local sushi restaurant for dinner. Believe it or not, Princess Fussy loves ebi and salmon nigiri and especially masago (fish roe). Go figure. Her brother Stargazer at 16 months likes California roll, except the avocado which he hands you when he’s eaten the rest of the piece. Cute! Luckily his grandpa is a big avocado lover. Now that we’ve had a nice baby fix, we’ll be good for a couple of weeks. Heh. Meanwhile my shoulders need to recuperate from lifting cuddly but increasingly heavy weights.

Since I’ve finished the hearts and they’re all ready to be mailed, here’s the FO scoop: 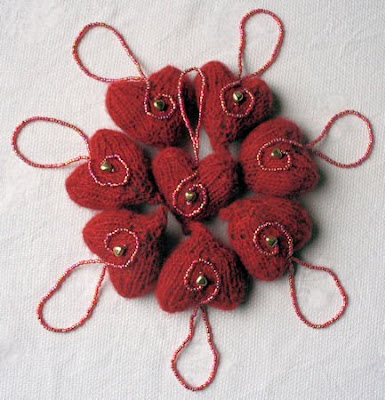 Comments: My version of the Heartfelt pattern came out much smaller because of the thinner yarn and needles. I stuffed the knitted hearts quite full with fleece which shrank somewhat along with the knitting wool when fulled. I did it by hand using an old washboard and hot soapy water. The beadwork was my own design that came to me when I was half asleep in the middle of the night! I found the best way to work it was to attach the heart bead, thread on 2.5” of beads for the spiral and take a stitch at the top of the stuffed heart, then thread 5” of beads for the loop (go through twice to reinforce), and finally thread 2.5” of beads for the second spiral and secure the second heart bead. Then I went back with the second needle and thread and couched the spiral line of beads down from the top to the heart on both sides, holding it in place with my left thumb as I stitched. I buried the tails in the felt under the gold heart.

You could use this decoration all year, but it’s especially festive for Valentine’s Day or Christmas. Just watch out for moths if you store it away in between! I usually send my wool items for an occasional “Arctic vacation” in the deep freeze which seems to keep the bad guys at bay.

I’m going to concentrate on the Unmentionables and try to get that completed asap. Plus I’ve been plugging away at the Hepburn cardi while TV watching in the evenings and am nearly up to the armhole decreases on the fronts. These are the last big pieces to finish with only the front and neck bands to go after blocking and sewing the main pieces together. Then I can get on to the Red Fields Shawl. I like to have no more than 3 knitting projects started at once but if you’re counting, I’m still at 4. There is no deadline on the A-Maizing socks. They’re just my almost-mindless knitting. Which is about where my head is at today.

Those hearts are really pretty!