Continuing yesterday’s riff on weaving, I was pondering the reasons why weaving isn’t more popular. After all it’s faster than knitting (really!), makes cloth that you can use for anything you can envision, doesn’t necessarily need to be sewn (think scarves, shawls and runners), has tons of scope for invention/variation/experimentation and you can get a lot of cloth for your yarn buck. There are drawbacks of course. The big one is the equipment can be very pricey and take up a lot of space. That’s not to say that you can’t weave on tiny Weavette looms or with two clamps and a deck of cards, but most people prefer to use a floor loom. And a floor loom isn’t portable so it can be a very lonely pursuit. We don’t actually weave at guild meetings but that’s where we get our social contact from. It’s quite different from a knitting meet-up — or actually not. There’s often many folks knitting (me, for one) or occasionally spinning at a weavers meeting! Not so different at all.

However, weaving isn’t out there in your face. We don’t have official Weave In Public days. We do demonstrate in various venues but that’s probably the only contact the Muggles have with looms. It’s amazing how often I have to explain that I’m not a living history performer but I do all this stuff in real life! With modern equipment (not antiques) and often using modern fibres (tencel, bamboo, soy silk) and I even (gasp!) use a computer to design and record my work. Some weavers even use computer-driven looms. I once was told by a gentleman watching me that it was a dying art. I said I was feeling very well, thank you, and was hoping that not only would I live a long and happily crafting life but that I would also pass it on to as many others as possible before I kick off. No dying happening here. (Though dyEing, yes!) It’s just in the closet — or the studio — and not out in the open where everyone can see it.

Of course we’re having some difficulty in attracting younger members to our guild though and I think it’s a universal problem. Interestingly I often hear knitters who’ve recently discovered spinning and dyeing mention weaving as seeming very interesting. It’s not that they aren’t intrigued. But they don’t have time, money or space for yet another craft. They are busy with their work and families or whatever. They might even see us as a bunch of old ladies that aren’t terribly interesting. Or maybe intimidating. I don’t know. I know sometimes it takes newbies time to feel comfortable and to find mentors and friends, particularly if they are at all shy. We do try to be welcoming and friendly but we just might not be what they were expecting to find.

Along with the difficulties that newbies have finding their place in the Weavers’ World is that there are very few formal classes offered for them either through the guild itself or in the community. There’s a couple of reasons for this, the big one being that there just aren’t enough people to fill more classes. Also having enough proper equipment for each student is problematical. Putting a beginner on a crappy table loom is an exercise in frustration. They have to really be fired up to work past the limitations. Truly it’s a rare person who can afford to put out hundreds or thousands of dollars on a new hobby before they even know if they like it or not. It’s not like knitting where you just need a couple of pointy sticks and a ball of yarn or spinning where you only need a spindle and some roving to get started. Weaving is a much bigger leap.

That’s not to say it can’t be done. One person I know makes lovely textiles on rigid heddle looms. These are small and reasonably priced with a shorter learning curve than a shaft loom. And if you’re willing to do some pick-up or use mulitple heddles, you can get some very complex effects. Still, most folks want a “real” loom eventually but it’s an excellent and much more portable option. Another good option if you have more space is to locate a secondhand floor loom. They are usually still in good shape if reasonably cared for or can be rehabilitated. Leclerc looms are a good bet here in Canada because they are the most common manufacturer and parts and manuals are usually still available even for decades-old looms. I also have to say that not all table looms are bad! I own two of them myself and find that a floor stand is ideal so that you can sit and work. Check out the lever system to make sure that it’s comfortable for you. Leclerc Dorothys are the most notorious for noisy metal-on-metal and I break at least one fingernail every time I use one. Better than nothing (I’ve woven a surprising amount on these at workshops) but not recommended. My favourite looms are of course the ones from Woolhouse Tools and not just because John and Teruko are a small BC family business but because their equipment works really well. Unfortunately they would like to retire and the business is up for sale so I’m not sure how long their products will be available. Secondhand ones rarely come up because I’m not the only one who thinks they are great. Here’s Gertrude #27, the 45” 8-shaft 10-treadle countermarche, wearing the Circus Blanket: 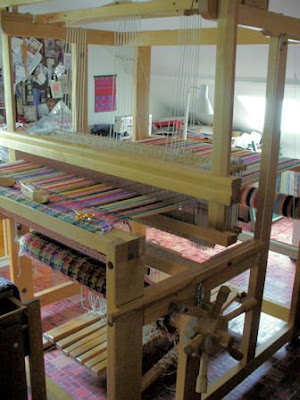 And Carolyn, the 23” 12-shaft table loom on a stand with two trays, still wearing the remains of the warp from the woven shibori workshop I took ages ago: 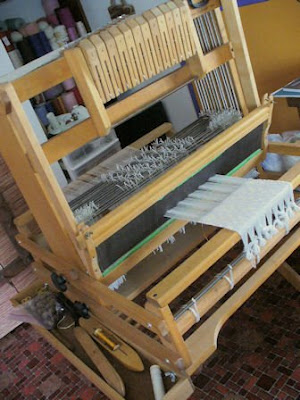 I got my yard woven yesterday and I’m into the last third of the blanket. Less than 3 yards to go. If it seems like a honking great piece of fabric, it is. I plan to full it quite well (not to felt though) after stitching the three sections side-by-side. As I’ve said before, I need a large blanket to tuck in properly. Sort of like king-sized but for my double-sized bed. I’m aiming for around 100” square when it’s done. That way I can turn it different ways to help it wear more evenly. It’s going to last, darn it! Because I’m not doing this again any time soon.

On the knitting front, I’m nearly done the Stargazer Pullover. Just a bit of sleeve left and then stitching the side seams and blocking. I need to get today’s yard done now that I’m back from getting my hair cut (desperation!) and picking up a few groceries but I’m still hoping to complete the sweater today. That only leaves 2 projects on my needles! Oh-oh, I feel some startitis coming on.

Hi Damselfly,
I'm happy to tell you that the Lows of Woolhouse Tools hope that the new buyer ( when one appears) will carry on the business and so the looms and equipment will continue to be there for weavers.

As you know I have two of their looms as well and simply LOVE them.

Susan
PS the circus blanket looks great! I'd sleep under that! Love the colour mix....

I know they want the next owner of Woolhouse to carry it on into the future. But first they have to find someone with all of the right elements to do that: money, time, technical skills, business sense, the right personality and most of all, the desire to do it. That's a pretty tall order! But I'm holding out hope.