Still rocking on that boat that my head somehow thinks I’m floating on. I still managed (between bouts of nausea) to get the fridge cleaned out yesterday. A lovely Sikh gentleman and his son showed up just before supper to fix it which took about 15 minutes. Just a new thermostat and now it’s working fine again. Fridges are supposed to be cold inside! Go figure. I’m glad it was relatively easy to repair because I do love that big old thing. Everything is arranged just the way I like it and it holds loads of stuff. With the freezer on the bottom (with a door not a drawer) everything in the fridge section is at eye level, no bending over to find the veggies. I was having nightmares about having to get a new one. It seems that they only come in white or steel these days, neither of which appeal to me. Almond has gone the way of the avocado green and harvest gold of the ’70’s now unfortunately. What is it with the stainless steel appliances craze? Is that what they mean by a “gourmet kitchen”? Because it looks like you’re some kind of professional chef? Too cold and industrial for my taste and besides it shows every fingerprint.

T-Man helped finish up staining the deck railings plus the one around the basement stairs. So now there’s only the front rails to do but they have to be cleaned first. We seem to be getting an awful lot done on the outside of the house this summer. Somehow we’re feeling pushed to do it. Maybe the perfect weather has helped? It’s been dry for a month and lately a bit cloudy in the mornings and not too hot. Couldn’t ask for better for painting and scraping and cleaning. The only drawback is the fact that I have to spend so much time watering everything. The lawn has been ignored (civic watering restrictions) and it already looks like it usually does at the end of August with expanding brown patches.

Cleaning the fridge inspired me this morning to clean the oven to match. But first I baked a crustless quiche. I put the last of our asparagus and garlic scapes in it along with ham and mushrooms and lots of cheese. Yum! I’m not feeling quite as bad as yesterday so I just keep plugging along. Playing the “As If” game with myself and trying to act as if the world was holding still for me. Sometimes it actually works.

Just thought I’d show some of the sock knitting I’ve been doing. First the A-Maizing socks that have been going on forever. They’re just past the side gussets on both: 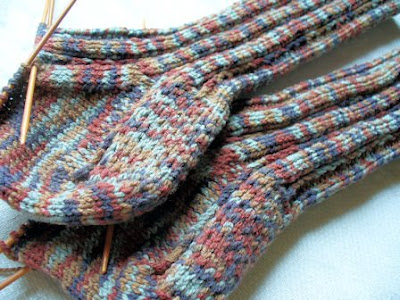 Check out the cute heel flap treatment thanks to Criminy Jickets’ excellent Ridges & Ribs pattern. I think what’s slowing me down with this project is the elongated twisted stitches are rather difficult to accomplish in this yarn because of its splittiness. I have to make sure I have all of the plies caught on the needle. It wouldn’t be so bad if I was actually looking at what I was doing but since I try to knit while reading, that just slows me down. On both the knitting and the reading part. Plus there’s no deadline for these because they’re for me. So I also started the Purple Passion Socks which do have a deadline (or at least a general timeline). Unfortunately they aren’t any easier to knit while reading. But I love the pattern stitch: 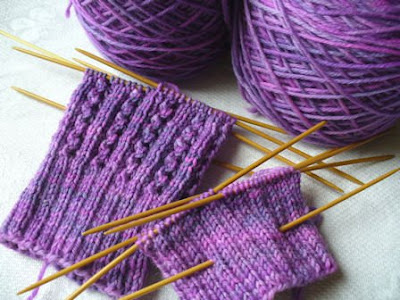 The yarn is Knit Picks Bare which I dyed in a range of purples. The Bare yarn is very soft, softer than the usual sock yarns even though it’s still 75% wool/25% nylon, and you get slightly more yardage at 462 yds per 100g skein. I’m hoping to have enough left to make a pair for Princess Pink out of the leftovers.

So go check out the AntiCraft’s new issue (link in my sidebar). I love the Bat Shawl! Of course it depends on one’s twisted sense of humour, but the two Vlad the Impaler hats are pretty cool too especially the one with little people (impaled, of course) around it. Not that I’d make one but you have to admit it’s a pretty ingenious way of using cable and bobble stitches. I am tempted to make a shrunken head necklace though and the Algormortis tea cosy is great too. Perfect for celebrating International Talk Like A Pirate Day (Sept. 19th, if you didn’t know). This is a really exceptional issue with lots of quite functional stuff for knitters. Alright then, knitters who are even weirder than usual. Quit looking at me like that.

Hope you feel better Louisa.I DO check your blog often even if I dont comment. So many things in common, grandkids, greenhouse, gardening and health (or not...) . Always entertaining and informative. thanks for sharing.

"Still rocking on that boat that my head somehow thinks I’m floating on."

That's a great description! When I read that I knew immediately you are experiencing what I had a few years back. I hope it clears up for you very soon, it's quite a drag.

I'm a knitter and spinner from Seattle. I love seeing your beautiful work.

We have been busy with outdoor garden/ house stuff too... and inside as well. It has been a *very busy* summer so far..

But think of how nice it will be when all done!

As for your 'dizzies': while the cause may be uncertain, the vertigo is not pleasant and you seem to get it often. There is a drug called 'serc' that works and is very effective to stop it when you realize its coming on. It's also not expensive either...a nice additional benefit. It has controlled my vertigo nicely.. hope it works well for you too!!