I Need A Vacation

I’ve been continuing to work very hard around here which is why I haven’t had time to even turn on the computer for the last few days. On Friday I cleaned off the deck furniture and put it back on the newly stained deck. I had to wash each of my cactuses off also to get off the grit and leaves and spider webs before I put them back on the big table. The big disocactus has about 2 dozen blooms coming very soon so I’m looking forward to how spectacular that will look. Here are some of the opening buds: 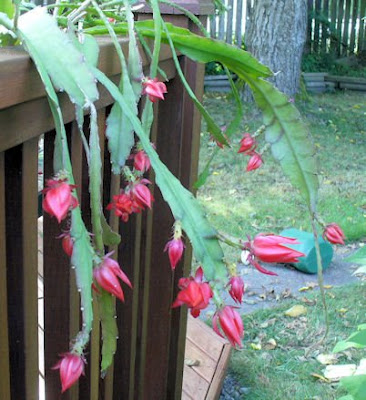 Then I just had time to make a birthday card for Milord Son-In-Law plus a potluck dish of blanched peas in ginger dressing with sesame seeds before we were off to the wilds of Surrey. We didn’t want to get caught in Friday’s rush-hour traffic so we left 3 hours before we were due to arrive at the birthday party. While we were waiting we went to nearby Bear Creek Park and went for a walk. We checked out the miniature train (it wasn’t running so we didn’t ride), the playground (where the kids were having a ball), and the gardens (lovely). We walked the Salmon Trail along the creek and finally sat for awhile in the car while I knitted and T-Man phoned his mom to find out how she was doing. We had spent 5 hours Thursday afternoon and evening with her in Emergency after she had a bit of a fainting spell when lunching with friends. Nothing wrong was discovered but it did give us a bit of a scare. Scared herself too! It was probably just stress.

Where were we? Oh yeah. Milord liked his Imperial Purple socks I made him and it was a lovely party with lots of chatting and munching. The birthday boy manned the barbeque himself so we had yummy hamburgers, hotdogs and veggie burgers. We sang both the conventional Happy Birthday song and the really funny dirge the local SCA like to sing: “Now we know how old you are; Your demise cannot be far. Happy Birthday (thump!) Happy Birthday (thump!)” There’s more, with references to “sheep” and such. I think there’s an infinite number of verses with more being improvised on the spot. We got home at nearly 11 pm which for us is the equivalent of 1:00 am so we slept in until 8 the next morning.

As if Friday’s walk in the park wasn’t enough, we went on our usual magazine/grocery run on Saturday morning. It was overcast but still quite warm so when we got back T continued his scraping the paint off the garage (and cremating the chicken on the barbeque) while I tediously weeded about 1/3 of the veggie garden and watered the whole thing. It rained some early Sunday morning but it barely watered under the trees so my time with the hose wasn’t wasted. I managed to make it to my knitting meetup on Sunday afternoon at the usual coffee shop. T stayed home to see The Ninja and Snow White and take the grandkids while their parents went to a movie to celebrate their 6th wedding anniversary. On the way home I met up with the train of Stargazer’s stroller pushing Princess Pink on the tricycle toward the park and joined in the fun. Later I cooked supper of slightly-singed leftover chicken quesadillas for everyone after their parents returned. It was a hit with the grandkids. Finding something that the Princess will eat isn’t easy sometimes. (Apart from her picking all my blueberries.) I’m tired today. Wonder why?

Unfortunately though the weather is nice this morning, it’s supposed to rain some more and be cooler this week. That might keep me out of the garden but it should be perfect for cleaning out the attics. However, today I’m on strike. It’s all been catching up to me and I need my batteries recharged. I’m going to read and knit until I can’t stand it anymore. Oh and do a mountain of dishes from yesterday, put away the laundry and maybe vacuum the main floor. Guess that’s not much of a vacation, huh?

Thanks so much for the kind comments on my health. The Dizzies are subsiding and haven't really slowed me down at all. (See above.) Wish I knew what causes it or how to avoid it in future though.

Louisa
There is a vertigo clinic in Vancouver. E-mail me and I will give you more information.
Karen

Thanks, Karen, but I'm sure the clinic is more for those who get it bad where it really changes their life and is truly chronic. I'm pretty much better now and I really only had one morning where my labyrinthitis was somewhat serious (even though I complain a lot!), so I don't think I need to go that route. Although I will keep it in mind, just in case.