I seem to be moving right along on both my current active projects. This must be because I’ve been staying out of the garden for the last few days except to water as necessary. It was also considerably cooler yesterday and today which meant that the huge and heavy wool of the Circus Blanket wasn’t quite so hard to take. It now has two pieces joined and part of the third.

Well I’m back! Betcha didn’t know I was gone, didja? We had a short-lived power outage so I went outside to water the garden while I was waiting for it to come back on. Now where was I? 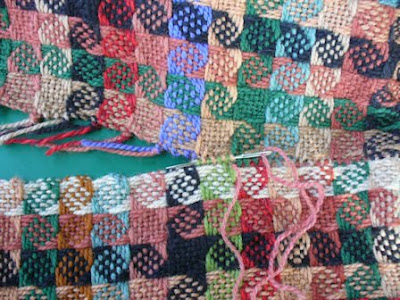 This is a smooth join and nearly invisible in plain weave but a wee bit more obvious in this pinwheel twill. I used two warp ends at each side that wove in tabby so I wouldn’t have to use a floating selvedge so the join isn’t quite continuous. But since the weft stripe colours don’t match up either, no big deal. It might have helped if I hadn’t used such a light-coloured stripe at the edge of the warp though. I decided that since the knots were helping to secure the two sides together, I would do the dirty deed and untie and re-knot them all in a square knot. The next photo of the underside shows the old overhand knots on the left, a retied knot in the centre and the ends snipped so the knots are almost invisible on the right. 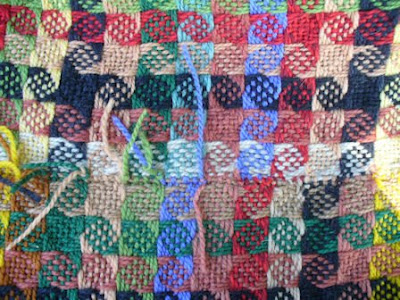 It’s a lot of work but I’d be afraid of things coming apart if I just chopped off the knots entirely. I’d rather go for durability than perfect beauty. The blanket will mostly be under the other covers on my bed anyway. I haven’t quite decided what I will do with the last knotty edge when I work over it while crocheting around the whole blanket. Maybe it will be secure enough to cut them off there. It will all meld together much more when I full the whole thing heavily in the washing machine anyway. That’s going to be a big job. But first, more work to do.

The other project that’s heading for the finish line is the Peeenk Cardi. I’m midway on the yoke and it’s looking just right. My pattern version in a smaller gauge seems to have worked out fine. I’m into the 5th ball of my total of 8 and this one will take me to the end with plenty to spare. Now what to do with the leftovers? Matching mitts and hat perhaps? Pink is certainly not my colour at all (at least by itself) but the Princess loves it. Unfortunately she’s not much on wearing warm hats or mitts no matter how cold she gets.

I can't wait to see the blanket in its finished state! It will be a stunner.