Yes, I do still have something else to talk about besides my house and garden. Today we have a Finished Object. One that I finished so quickly I never even had time to mention it here.

Peeenk Tam
for Princess Pink (to go with her Peeenk Cardi) 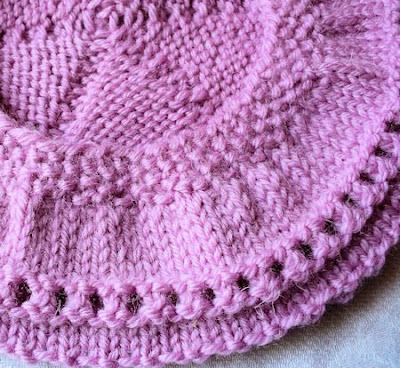 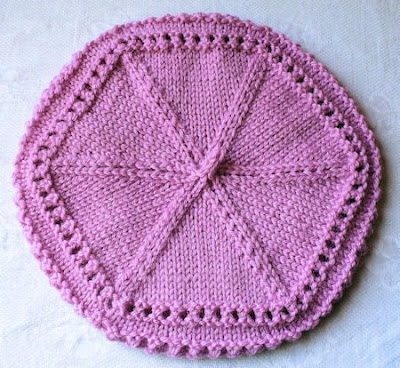 Comments: Ann Budd's generic pattern made it pretty easy to plug in the seed stitch border and 3 rows of the eyelet pattern from the cardi. I used the Wheel-Shaped Crown with the "subtle seams" and a short i-cord on 3 sts at the top. I blocked it on a 9.5" plate because I don’t like tams too large. I ran a strand of clear elastic (Stretch Magic bead cord) through the band edge and knotted with two overhand knots just to make sure it stays on because seed stitch isn't stretchy like ribbing. It turned out really cute and large enough to be worn for awhile. If she'll wear it at all!

I still have 2 balls of this pink yarn left and I’m trying to decide if I can stand to make anything else out of it or if I need to exchange it for something else. Like sock yarn. Working with this DK weight yarn has made me realize that I prefer finer yarns. This is probably the maximum thickness that I ever use. It might have something to do with so much knitting of socks and shawls. You kind of get used to the thin yarns. Or maybe it’s the feel of the finished fabric. Worsted weight just feels too bulky and heavy to me. It might be the fact that the longer you spin the finer the yarn you produce, but my heaviest handspun is only around 1100 yards per lb and is probably in the “3 Light” category in the Standard Yarn Weight System. Most of the time I spin something around fingering weight and sometimes go as fine as laceweight yarn, depending on how I plan to use it. I try to stay away from “frog-hair” even though I’m perfectly capable of spinning that fine. It’s just silly to have to ply several times before you can even use it for anything! Except maybe singles for weaving…

Next I cast on for another pair of socks, Purple Passion for my sweet sis-in-law’s upcoming birthday. She’s been going through a rough time recently trying to help get Auntie 90 settled in care. Because SIL is a respiratory therapist she has some idea of how to deal with the medical system and Auntie is suddenly no longer able to live in her home because of her health. Nana, my MIL, is one of Auntie’s two relatives with Power of Attorney but she really doesn’t want to have to do the job. The other relative is T-Man’s cousin and neither he nor his wife are much happier with the situation. Meanwhile Auntie is in hospital and is quite happy with all the attention and 3 square meals while a more permanent situation is located. I wish she could go where my mom was but I don’t think that’s a possibility. Now of course Auntie is regretting not having made better plans before her health deteriorated. 20/20 hindsight indeed. Nana, take note! And Auntie 92 as well. I’ve got quite a ways to go before it’s my turn but I’m sure paying attention.

You know how when you’re a child and the time seems to go so slowly, especially if you’re waiting for something like math class to end? And then as you get older time goes faster and faster and the seasons flip by like the calendar pages in those old movies. I feel like we’re trying to do so much this summer while the weather has been good that it’s going by much too fast. I ended up spending about 4 hours staining the deck railings yesterday yet they’re not finished yet. Today I took advantage of the cloudy weather to work in the garden for a similar amount of time. I now smell like dead fish again. But I still feel like I barely brushed the surface of the work that needs to be done. Maybe I should just shut up and enjoy the moments as they pass? And quit worrying so much about it.