Just got Knitter’s magazine in the mail, the last one of my subscription. I’m not going to be renewing though I probably won’t be able to resist buying it anyway. As I’ve mentioned before, I’m not particularly happy with the direction this magazine has been going. It seems like so many of the garments are designed just to show off a particular technique and aren’t very attractive. Just because you can doesn’t mean you should! I find myself thinking about how many changes I would need to make to each one before I would be able (or even want) to wear it. Too many. One big exception is Jane Sowerby’s lace shawl patterns. This issue has a great section on half-hexagon “fichus” or small shawls. She talks about how to fit lace patterns into the basic shape and there are several edging treatments including an attractive ruffle. Just up my alley — giving me the tools to make my very own version in any yarn. Another other useful article is by Cat Bordhi on her sock architecture with a lovely pattern for Spring Thaw Socks. I don’t much like them in white but that’s easy to remedy. The pattern for the Star Afghan by Sandra Daignault is also great and would work with plain or patterned yarn of nearly any dimension just like the shawls.

I suspect that nearly half of the patterns in this magazine were designed in-house which I think is where the problems lie. I’m not saying they’re all bad designs but it’s mostly not an esthetic that appeals to me. And I’ve heard rumours that other knitters are not particularly pleased either. When I look back on older issues of Knitter’s (I own every issue), there are many more nice-looking sweaters in them even though the fit on some is very oversized compared to today’s styles. Currently Interweave Knits and Knitty are far more up my alley and, judging by the number of Ravelers who have their patterns queued, other knitters agree with me. 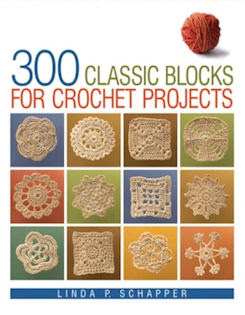 I also got a couple of new books. The first one is the 3rd in the series by Linda P. Schapper, 300 Classic Blocks for Crochet Projects (hardcover). Linda’s books are to crochet what Barbara Walker’s Treasuries are to knitting: invaluable references to have on hand for designing. They’ve all been completely revised from the 20-year-old originals and the first two are on stitches and edgings while this book carries on with block designs in many shapes and includes both charts and written instructions. I just love paging through stitch collections and enjoying the many ways stitches can be combined into beautiful patterns. It makes my hands itch to start swatching. The examples here are all in plain ecru cotton so you need to have some imagination to see beyond the obvious. Just add colour and texture with your yarn choices. Though there is a certain beauty in plain cotton thread crochet. 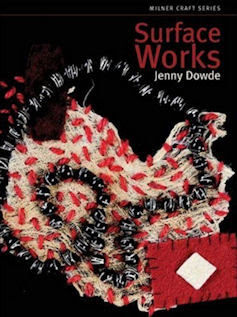 In keeping with my current interest in the more artsy possibilities of what one can do with knitting and crochet, I also got 2 more books in this vein. First is Surface Works by Jenny Dowde (softcover). This is Jenny’s 3rd book and covers adding surface decoration to knitted or crocheted backgrounds. As usual she has quite a difficult job in explaining specifically what she did in pattern form because her design techniques are so very improvised and freeform. She gives lots of small motifs and embellishment ideas and then puts them into patterns for hats, bags, pillows, jewelry and sweaters. What she wants you to take from this is to try things out, change her patterns if you want, and then go ahead and create your own items. I do like the way Jenny doesn’t discriminate between knitting and crochet and switches or mixes them freely and also adds spool knitting, lucet, pom-poms, yo-yos and the like. But I can’t say I’m overly impressed with her results apart from the cover art piece which consists of beads, stitching, woven cloth and felt — no knitting or crochet to be seen! There are some good ideas to play with though and, as you can see from that particular piece, they aren’t limited to the obvious techniques. 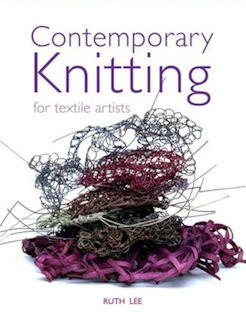 It’s hard to describe what you do when it’s personal and instinctive and kind of organic yet give your readers the tools and incentive to experiment and find their own style. The next book, Contemporary Knitting for Textile Artists by Ruth Lee (hardcover), leans even farther than Jenny Dowde’s books into capital-A-type Art with knitting as the medium of expression. This book is more a series of techniques written out as experimental exercises and utilizing different yarns or yarn-substitutes such as wire, cord, and ribbon. The photos are more intriguing than illustrative and I think to get the most out of this book you really need to pick up the needles and try things out. But you’d better be good at working from words rather than diagrams or charts. Even so, Ruth is trying to free you from the written pattern and to work intuitively right into the third dimension.

Interestingly neither of these last two authors is from North America (and I’m not too sure about Linda Schapper either). Jenny Dowde is Australian and also does polymer clay jewelry and acrylic paintings as well as fibres. Ruth Lee is from the UK and has taught at Cumbria Institute of the Arts for over 20 years. She’s a knit designer and textile artist and I also have another book from her called Knitting Beautiful Boas & Scarves (2006) in which many of her ideas appear in a more wearable form. I know I said that I’m interested in the artsy possibilities of textiles and I am. But I’m still much too practical to make something just for art’s sake! So I amuse myself by reading and occasionally swatching a bit. Maybe one day I’ll have something concrete to show. Or not.

I have one more super-expensive but very special book that just came Sunday and I’ll talk about it in another post. Meanwhile it’s very strange hearing rain on the roof after it’s been sunny for so long. It’s a lovely reprieve from having to water the garden today and it even penetrated under the walnut tree. Yesterday I said I was taking a break but I still ended up out there weeding and watering for several hours. I can’t help myself! The results are looking pretty good though which is what’s keeping me at it this year instead of pooping out and letting it all go to seed like I usually do. Today I hope to clear out one of the 3 remaining attics. Wish me luck.

Contemporary Knitting looks good to me. I haven't yet picked up wire or leather to knit. I did knit a paper crown last year out of streamer paper.

How wonderful was that rain today? I have at least 4 days away from watering the garden now! ;)