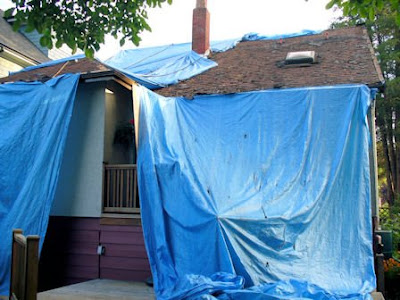 There’s not really any water around, but with all the blue tarps on the south side of my house it feels like I’m living in an aquarium. I keep half-expecting fish to swim by outside my windows. The workmen didn’t finish yesterday so they left the tarps up overnight so they wouldn’t have to put them back up today. And yes, they asked first. It’s weird not being able to see out my windows though. I had to turn on the lights to cook our slightly odd-coloured dinner last night.

Speaking of food, I’ve been growing some of our veggies, fruits and herbs for a very long time. As frequent visitors to Damselfly’s pond might know, I’m a huge grow-your-own fan. I even grew stuff in boxes on a flat tar-and-gravel garage roof when we were renting. (The only way to get to it was to walk “the plank” across a 15-foot drop. My kids will tell you how exciting that was when they were little.) I’m a big believer in local food and eating what’s in season. Living where I do in this little piece of Lotus Land on Canada’s wet…er, west coast, we have a very different type of growing season than many do. Our frost-free season is very long, usually from early to mid-April to sometime in October. However, things grow much slower than you might think because it’s often overcast and sea breezes make it relatively cool. I still have purple sprouting broccoli in my garden that is celebrating its first birthday! (The replacements are currently starting to grow in a pot in the greenhouse.) The “real” broccoli is still pretty small and I haven’t picked any yet. But it’s coming along: 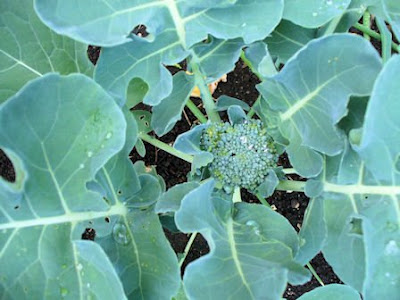 Some things do really well and some things don’t. And which ones those are will change from year to year. You have to have patience and experiment. This year, I’m so happy to report that I have summer squash! Aren’t the flowers pretty? Here’s a boy one and a girl one snuggling: 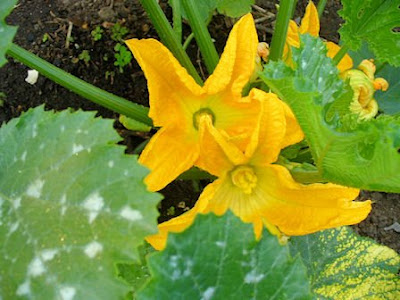 Yes I know, an over-abundance of zucchini is a running joke. Not here. For whatever reason, I haven’t been able to grow it properly for several years now. I also have little yellow pattypan squashes too. I love those. Unfortunately the lady who sells them at the farmer’s market won’t be selling me any this year (but perhaps some winter squash instead). I also have heaps of salad greens: lettuce, arugula, and mizuna. I was buying arugula last year but not this one. Though I can’t grow spinach (leaf miners) or any of the root veggies such as radishes, carrots, or kohlrabi (rust flies), we luckily don’t have some of the problem bugs that other places have such as squash borers or Japanese beetles. My biggest pests are sow/pill bugs and slugs/snails. And late blight on the tomatoes. Which is why they live in the greenhouse. Currently the Juliet (Roma-shaped cherry tomatoes - indeterminate) are up to the roof and the Alicante (red vine) tomatoes aren’t far behind: 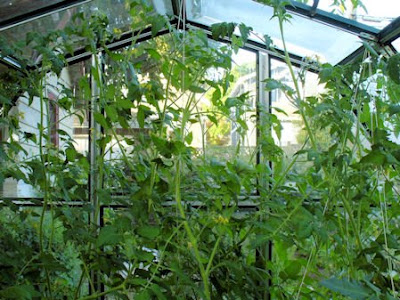 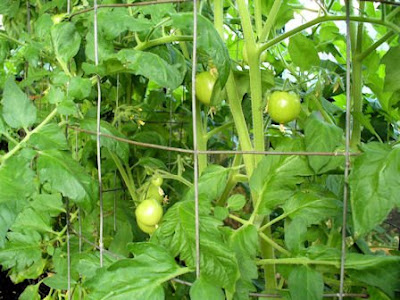 It’s a jungle in there! We can’t really grow the hot-weather stuff like cucumbers and peppers though I try always to choose early varieties if anything is going to mature properly at all. But that’s ok. Really sometimes when my garden delivers it does so in spades! Right now it’s peas: 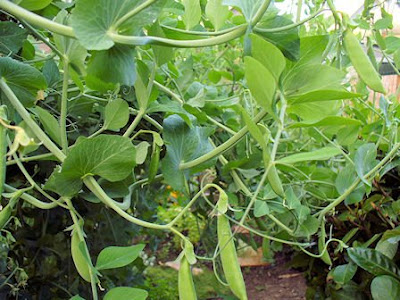 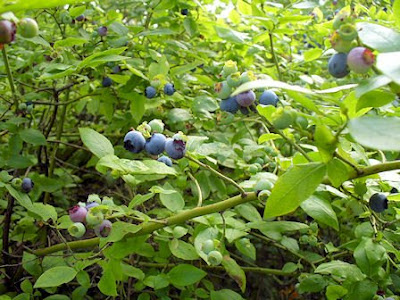 I feel bad when there’s lovely local produce at the store or the farmer’s market that I don’t need to buy because I have my own. Guess that’s not actually a big problem though, is it? We atone for this buy buying lots of the stuff we can’t grow, especially fruit like strawberries (sadly already over for this year), cherries, apricots, peaches, and later in the season wonderful apples. And then we pig out because I don’t freeze much (usually only my blueberries and blackberries). We just don’t use it for some reason. I prefer my produce fresh.

I think I need to leave soon. They’re busily tearing off the rest of the roof today. I feel sorry for putting my poor house through all this trauma. It will be better when they’re done though and we’ll be warm and dry this winter with no worries about rain and wind and ice or anything like that. Unfortunately it’s really hard for me to concentrate with all this shaking and racket going on overhead! I want it finished. Soon.

By the way, thanks so much for all the kind comments on my Circus Blanket! I really appreciate your perspective because I’ve been staring at this thing for much too long and it started to look like clown barf to me before it was finished. Nice to know it’s appealing to view as well as to sleep under. I’ve been happy that it’s been cool enough to need it at night, though poor T-Man was too warm with it tucked in on his side. Once he pulled it out he was fine. I prefer my side safely tucked in. It’s not only more comfy, but I’d be blanket-less by morning thanks to T’s rolling over and taking the covers with him. Even in our double sleeping bag I end up with the zipper down my middle by morning.

We had to do tomatoes in a greenhouse because of late blight too, where we lived before. You never have problems getting yours to set fruit in there? They look great.

The only time we had a problem with the greenhouse was last year when the weather was wet and cold for weeks and we left the ventilation windows and the door shut for too long. We got some powder mildew and perhaps half of the fruit we should have. So far this summer everything has been wide open and the insects wander in and out freely. No problems so far! Lesson learned.

Nice veggies!!! Our garden is coming along as well. Though Hub says he'll try the tomatoes inside our green house next year. (ours looks like yours actually) We are enjoyiing salad greens, snap peas, beet greens, parsnips and Chinese greens too

Blueberries: we have a few bushes and we have a problem you don't seem to have.... deer and bears. As soon as the berries get a blue blush, they get 'em! I'm not going to stand over them with a stick for a bear!

Tall(er) sturdier fencing is on the (long) list of improvements for the future...

Bear wins berries, no contest! How strong of a fence does one need to keep them out? I can only picture big iron bars and barbed wire!