So where did I leave off last? Oh yeah. I was right about my hearing aid problem and it was exactly the same thing as last time – only on the left one. The receiver gets really weak resulting in the part needing replacement. It was also interesting that both times it happened a short while after they were checked and okayed by my audiologist. Odd. It cost me another $30 but at least they work right again.

I forgot to show off the bison yarn in the finished skein: 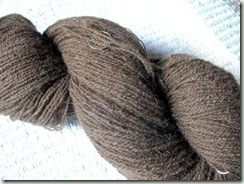 That’s a dime to show scale. It’s approximately 360 yds and 2 oz. And sooooo amazingly soft! I keep cuddling it. I used the Yarn Abuse method of finishing so it’s very fluffy and stable. One cute account of this process is here. (Please ignore the little inaccuracies. For starters that’s “Boxing” Day. And we always run around showing off our handknits in Vancouver. Not just one day a year. Heh.)

Then there was the problem of what pattern to use. It’s for a gallery show for my guild’s 75th anniversary so, since weavers tend to make rectangles, I wanted something with a different shape that would stand out. (And probably give them conniptions trying to figure out how to display it!) There are other options of course, but I thought a triangle lace scarf or small shawl would be best because apparently I’m addicted to wearing such things. Then the hunt for the right pattern was on.

It was harder to choose than I thought because I didn’t have much yarn, can’t easily get more if I run out, and didn’t want it too simple or plain. I don’t really have enough time to design my own and this yarn doesn’t really much like to be frogged if it isn’t working. So I settled on Gail (Rav link) by Jane Araujo. Then I read a bunch of the comments by those who have knit this pattern before. There’s lots of them! And many had trouble with the fact that though it’s a lovely pattern, it’s not written very clearly. Instead of seeing if perhaps there’s a way of editing it better, the designer seems to have gotten rather defensive. I guess because it’s a free offer, she’s given up on it and moved on. Meanwhile, others have noted their helpful solutions. And it doesn’t seem to have stopped over 1300 knitters from trying it anyhow! Me included.

I decided first to use Knit Visualizer to re-chart the main pattern. That helped me see it better and to locate the repeat. Then I dove right in! It’s addicting: 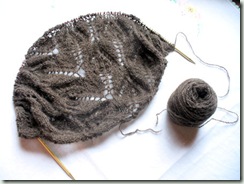 The name may change but so far I’m calling it Galloping Gail, thinking of the bison we saw at Antelope Island in Utah and the Buffalo Gals brand of bison fibre, which I read somewhere is one of Judith MacKenzie-McCuin’s enterprises. I hope I don’t run out of yarn because the only place I can find to get more of this bison is through Carolina Homespun. Apparently Wild Rose Fibres (my Canadian source) doesn’t have any more, at least not on their website. I think Judith has a deal going with Morgaine at Carolina Homespun to distribute her yarns and fibres anyway so that’s probably where they got it in the first place. It’s certainly cheaper than the Buffalo Gold brand - US$15 vs US$42 per ounce! I have no idea how they compare in quality. I found a wee bit of VM and a few stray guard hairs but nothing too annoying. This scarf is costing me C$40 just for the fibre alone! It’s going to be very nice though.

So, gotta go watch Canada’s hockey team bring us our last medal of the Games. Knitting with my buds is the best part! I’ll leave you with this shot by T-Man of the little sharp-shinned hawk who was eating at our birdfeeder yesterday. Guess nobody told him he wasn’t supposed to eat the birds at the birdfeeder? 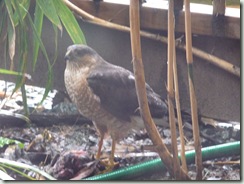 S’okay. I forgive him. He’s gotta eat too!

We get a pair of Merlin Hawks/Falcons living in our cedar tree in the front yard every year. When they leave it's always fun (might not be the right word) to go scope out around the bottom of the tree and see what they've left behind. My best treasure yet is a perfect white crow skull. Nature - a brute but so amazing!